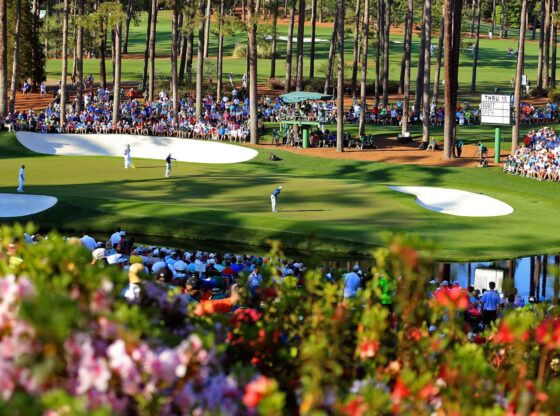 The Masters is a tradition unlike any other, and today marks the beginning of the 81st
edition of this esteemed championship.

The Masters golf tournament is linked to some of the legends of the game, from Snead to Hogan, Arnie to Jack,  and Phil to Tiger.  Manicured to perfection, Augusta National is a 7,435 yard risk-reward layout, with birdies and eagles awaiting players who have the mettle to handle its nuances.  The back nine – with its two reachable par fives and two birdieable par threes –  lends itself to sudden and dramatic lead changes.

Rich in tradition, the Masters is a rite of spring.  Augusta National is dazzling, featuring flowering azaleas and dogwoods, Rae’s Creek, the Eisenhower and Butler Cabins, Amen Corner, the Hogan and Sarazen Bridges, and the hallowed Oak Tree that sits just steps outside the classic clubhouse.

The idea for the Masters tournament originated with Bobby Jones, the only man ever to win golf’s Grand Slam.  Jones sought the advice of Clifford Roberts, who later became chairman of Augusta National.  They built a course on a piece of land that had been an indigo plantation in the early 19th century and a plant nursery after 1857.  He hired British golf course architect Alister McKenzie to help design the course, and work got underway in 1931.  The course formally opened two years later.

Jones petitioned the USGA to play the U.S. Open at Augusta, but the request was denied, as the governing body of American golf thought the Georgia summers were too hot.  Undeterred, Mr. Jones decided to host a tournament of his own, and the inaugural Augusta National Invitational Tournament was held March 22, 1934.

It was won by Horton Smith, and the course played current holes ten through 18 as the front nine, with holes one through nine serving as the second nine.  In 1935, the routing was reversed permanently to its present layout.  The tournament changed its name to the Masters in 1939.  The event was not played from 1943 to 1945 due to World War II.  To assist with the war effort, cattle and turkeys were raised on the Augusta National grounds.

The Masters is an official event on the PGA Tour.  With 90 to 100 players competing each year, it assembles the smallest field of golf’s four major championships.  The Masters is an invitational event.  There are no alternates or qualifying tournaments, and participants receive invitations based on stringent criteria.  Past champions are always eligible, but since 2002 the club has discouraged them from participating at an advanced age.

The last five winners of the U.S. Open, Open Championship, and PGA are invited, as are the winners of several amateur championships.  The top 50 players in the Official World Golf Ranking are all invited, as are the top 12 finishers from the previous year’s Masters.  A cut is made after 36 holes and includes the top 50 places [with ties] and all players within ten shots of the lead.

Threesomes play together the first two days, while twosomes play on the weekend.  Format is stroke play and lowest aggregate score determines the winner.  In the case of a tie, sudden death begins on the 18th hole.  The total purse for this weekend’s Masters is $ 10 million, with the winner earning $ 1.8 million.  Horton Smith, the winner of the inaugural event in 1934, received $ 1,500 of the $ 5,000 purse.

Augusta National members are required to wear a green sport coat while on club grounds.  Since 1949, a green jacket has been awarded to the winner, who is made an honorary member of Augusta National.  By tradition, the previous year’s winner puts the jacket on the current winner at the end of the tournament.  The coat becomes the winner’s property but must remain on the grounds of Augusta National.  The Masters champion also receives a gold medal and has his name engraved on the silver Masters trophy, which was introduced in 1961 and depicts the Augusta National clubhouse.

The runner-up receives a silver medal, which was first awarded in 1961.  Bobby Jones was the greatest amateur in golf history, and the Masters has long honored amateurs.  The best bedroom in the world is the Crow’s Nest, Mr. Jones’ attic in the Augusta National clubhouse, where select amateurs are invited to stay while competing in the tournament.  Eight players who stayed there later went on to win the Masters after turning pro, including Jack Nicklaus, Tom Watson, Ben Crenshaw, Phil Mickelson and Tiger Woods.  Beginning in 1954, the low amateur has been awarded a silver medal.

The great Ben Hogan initiated the first Champion’s Dinner – officially known as the Masters Club — in 1952.  Held the Tuesday of tournament week, the event is open only to past champions and select club members.  The menu – selected by the defending champion and prepared by the club’s chef – usually consists of fare from his homeland or his favorite foods.

Bernard Langer served wiener schnitzel in 1986, Sandy Lyle offered haggis three years later, and Tiger Woods chose cheeseburgers and French fries the first time he was defending champion, in 1998.  The player with the lowest daily score receives a crystal vase from Augusta National, while players who score a hole-in-one or double eagle win a large crystal bow.  Every eagle recorded earns a pair of crystal goblets.

The Masters has produced several of the most dramatic and memorable moments in sports history.  In 1935, Gene Sarazen hit the shot heard ‘round the world, when he holed a double eagle [albatross] from the fairway of the par-five 15th on the final day, tying him with Craig Wood for the lead.  Sarazen went on to win the ensuing playoff by five shots.  In 1968, Argentina’s Roberto De Vicenzo signed an incorrect scorecard, recording a par “four” instead of his actual score – a birdie “three” – on the 17th hole.

By the rules of golf, De Vicenzo [who won more than 230 tournaments worldwide during his career, including the 1967 Open Championship] was required to take the higher score, costing him a spot in a playoff with Bob Goalby, who was awarded the green jacket.  After realizing his mistake, the Argentinian famously said, “What a stupid I am.”  Jack Nicklaus has won six Masters championships, the most in history.

None were more exciting than his final one, when the Golden Bear blistered the back nine [carding a 30] to win the 1986 Masters.  Nicklaus owns several Masters records, including most top tens [22], most cuts made [37] and oldest winner [46 years].  The Bear was also in the center of perhaps the most magnificent Masters ever played, when he out-dueled Tom Weiskopf and Johnny Miller in 1975 to claim his fifth green jacket.

Augusta National has undergone numerous changes since opening in 1933.  Bunkers have been added, water hazards extended, new tee boxes have been built, and hundreds of trees have been planted.  In recognition of its history as a former plant nursery, each hole is named after a tree or shrub.  The 13th is called Azalea, 15 is dubbed Firethorn and the home hole is Holly.  Rae’s Creek meanders through the property, guarding the front of the par-five 13th.  Two bridges are named in honor of past Masters champions.

The Hogan Bridge takes golfers to the 12th green and is one of the most photographed sites at Augusta.  The Sarazen Bridge spans the pond in front of the 15th green, where “The Squire” made his famous albatross in 1935.  Located in the northeast corner and at the lowest elevation on the golf course, Amen Corner is comprised of the 11th, 12th, and 13th holes, one of the most spectacular stretch of holes in golf.  Nicklaus has called the 155-yard 12th the most difficult par-three in golf.  Augusta National has no rough and its toughest defenses are fast, undulating greens.

The Masters is the most non-commercial entity in American sports.  Food and drink purchased from Augusta National’s concession stands are labeled only with the iconic Masters logo.  Beer is marked simply as “foreign” or “domestic,” and everything – from sandwich wrappers to drinking cups to trash cans – are green.

The Masters is the most well-run event in golf.  Courteous patrons [not fans] clap politely for shots well-played.  There are no sponsored graphics or blimps, and the public washrooms on the grounds are fully attended and as spotless as a five-star hotel.  In short, the Masters is the antithesis of the Phoenix Open.

CBS has televised every Masters broadcast since 1956., when the network used seven cameras and covered only the final four holes.  This weekend, CBS will employ more than 50 cameras while providing nine hours of live coverage with action from all 18 holes.  The partnership between the Masters and CBS is unique, as the two entities have signed a series of one-year contracts for the past 62 years consecutively, making the tournament the longest-running sports event broadcast on one network.

Legendary announcer Pat Summerall called the action from the 18th hole from 1968 to 1994, while the versatile Jim Nantz will be calling his 32nd Masters for CBS this weekend.  Augusta National’s well-heeled membership ensures that the club is not dependent upon broadcast rights fees for the Masters, allowing CBS to deliver 58 minutes of uninterrupted, commercial-free golf every hour of each broadcast.  Beginning in 1982, USA Network covered the first and second round.  ESPN replaced USA’s weekday coverage in 2008.

Television made Arnold Palmer.  And Arnie made the Masters.  Charismatic and flamboyant, the camera loved him.  The King was the first player to win the Masters four times and, in the eight years from 1958 and 1965, he finished in the top three seven times.  Since 1963, an honorary tee shot is struck on the morning of the first round to commence play.

Sadly, this morning will be the first time since 2006 that Mr. Palmer – who passed in September 2016  — will not be part of the ceremony.  Mr. Palmer remains the defining figure in golf and will be missed.  Today’s opening ceremony will include Jack Nicklaus and three-time Masters champion Gary Player, who has played in the revered tournament a record 52 times.

Today is an important date in Masters history.  In addition to the opening round getting underway this morning, past champions Horton Smith, Craig Wood, Jimmy Demeret, Sam Snead and Arnold Palmer all won green jackets on this date.