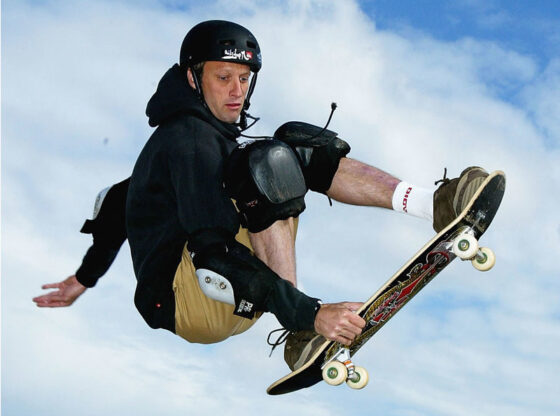 Born on this date in 1968, Anthony Frank Hawk was one of four children born to a retired U.S. Navy officer father and mother who was a homemaker. He grew up in San Diego, California, as a hyperactive “demon” child, terrorizing babysitters, teachers and his parents. Hawk was a high-strung perfectionist who regularly flew into rages. Nancy Hawk described her youngest son as “challenging.” Hawk was also intelligent, with an IQ of 144. At nine, Hawk was given a hand-me-down blue fiberglass skateboard by his older brother Steve. Despite being chipped and scratched, the board changed Tony Hawk’s life, providing him a newfound freedom, recalling, “I liked that no one was telling me how to do it.” The gangly youngster was so skinny that he wore elbow pads on his knees and practiced for up to six hours a day at the now-defunct Oasis Skatepark in San Diego. By 12, Hawk was winning amateur contests throughout California. Frank Hawk saw that the sport had saved his son and, dissatisfied with the quality of competitions and lack of sponsors, founded the California Amateur Skateboard League [CASL] in 1980. Three years later, he established the National Skateboarding Association, the first professional skateboarding organization, and Tony Hawk turned pro. By 16, the undersized teenager was widely considered the best skateboarder in the world. Nicknamed “Birdman” because of his high flying acrobatics, Hawk helped boost the popularity of the sport. He was earning over $100,000 a year in prize money, public appearances and endorsements and bought his first house before graduating from Torrey Pines High School in 1986. Hawk dominated skateboarding. By 25, he had won 73 of the 103 pro contests he entered and placed second in 19 others.

Vertical, or “Vert” skateboarding is the act of riding a skateboard on a skate ramp or other incline and involves the rider transitioning from the horizontal plane to the vertical plane in order to perform tricks. It originated in emptied backyard swimming pools in the 1970s. “Street” skateboarding focuses on tricks and transitions in public areas. As the sport became more popular in the 1970s and 80s, it migrated to urban streets, plazas and industrial areas, utilizing park benches, guard and handrails, stairs and other street furniture not built for skateboarding. In the early 90s, interest in skateboarding was waning. Hawk had started his skateboard and accessory manufacturing company, called Birdhouse, and was struggling financially. In 1995, ESPN introduced the Extreme Games–later called the “X-Games,”– and skateboarding exploded. Tony Hawk won gold medals in Vert at the X-Games in 1995 and 1997, and teamed with Andy MacDonald to take gold in Doubles at the 1998 Games.

A “900” is a skateboarding trick that involves a 2 1/2 -revolution aerial spin performed on a ramp. While airborne, the skater makes two-and-a-half turns– 900 degrees—about their longitudinal axis before landing facing the other way. It is one of skateboarding’s most technically demanding tricks. Tony Hawk had been working on perfecting the 900 for a decade when he arrived at the X-Games in San Francisco in July 1999. After ten failed attempts, it was past regulation time, but as one announcer said, “We make up the rules as we go along. Let’s give him another try.” Despite protests from other skaters, Hawk continued, finally completing the trick after more failed attempts. Judges overlooked the time limit and awarded Hawk first place in the ‘Best Trick” event. Following the 1999 X-Games, he retired from competitive skateboarding to focus on his career off the ramp.

Mr. Hawk has released a video game series, Tony Hawk’s Pro Skater, launched the online RIDE Channel on YouTube and has made dozens of film and television appearances. In 2002, he started Boom Boom HuckJam, a show tour featuring motocross, skateboarding and BMX. On Father’s Day 2009, he performed during a celebration in Washington, D.C., marking the first time someone skateboarded on the White House grounds with official permission. Three years later, Hawk assembled the first group of vert skateboarders to perform in India, including a visit to Gandhi’s house. Tony Hawk is the most successful and influential pioneer in vertical skateboarding. He helped transform skateboarding from a kid’s parking lot pastime into a respected sport. Skating icon Stacy Peralta said, “Tony is the first skateboarder who has given the world a face to put on the sport. He has become a part of American pop culture.” Hawk, who was crowned vert skating’s world champion for 12 years in a row, was named “Most Influential Skateboarder of all Time” by FoxWeekly in 2014. Hawk is a philanthropist. The Tony Hawk Foundation has given away more than $3 million to help build over 400 skateparks around the U.S. and supports projects in low-income areas while helping underprivileged kids.

Since the 1999 X-Games, Mr. Hawk has landed the 900 several times, including five years ago today, the date of his 43rd birthday. According to a 2003 American Sports Data poll, more American children under 18 are skateboarding than playing baseball.

“I feel like if I’m not out there getting banged up, then I’m not getting better.”– Tony Hawk