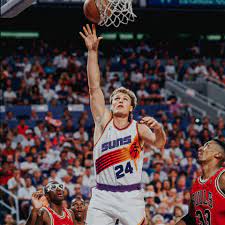 Tom Chambers in the only player with 20,000 career points not in the Naismith Basketball Hall of Fame.

A superb shooter who ran the floor like a gazelle, Chambers played for five teams in 14 NBA seasons.  He appeared in over 1,100 games, averaging just over 18 points and six rebounds per contest.  Chambers made the first of four career NBA All-Star teams as a member of the Seattle SuperSonics in 1987.  The game was played in Seattle’s Key Arena, where Tommy Gun electrified the home crowd, leading all scorers with 34 points and being named MVP in a 154-149 West victory.

He attended Fairview High School, alma mater of actress Jessica Biel and Indianapolis Colts head coach Chuck Pagano, who was one year younger.  A 6’2” guard as a high school sophomore, Chambers grew seven inches over the next six months without losing any coordination, a rarity for a teenager.  He suffered a broken wrist as a senior, which proved to be a blessing, as it forced Chambers to use his left hand more, improving his game.  In his final game for Fairview, the silky righthander hit 20 of 30 shots to score 50 points, a Colorado prep record.  He also hauled in 22 rebounds.

In 1977, Tom Chambers returned to the Bee State and enrolled at the University of Utah to play for Jerry Pimm.  Pimm had also recruited Danny Vranes, a 6’7” forward who would earn a spot on the U.S. team for the 1979 Pan American Games.  Chambers cracked the starting lineup as a sophomore and led the Utes in scoring in each of his final three seasons in Salt Lake City.  As a senior, Chambers led Utah in rebounding for the second straight year and guided the Utes to a 25-5 record and the Western Athletic Conference title.

The San Diego Clippers made Chambers the eighth overall pick of the 1981 NBA draft, three spots behind Vranes.

Nine rounds later, the Clippers selected a guard out of San Diego state named Tony Gwynn, who opted to play baseball for the San Diego Padres and landed in the Hall of Fame in 2007.  As a rookie, Chambers started in all but three games and led the Clippers in scoring.  In his second season in San Diego, the Clippers drafted Terry Cummings, a power forward out of DePaul, making Chambers expendable.  In August 1983, Chambers was dealt to Seattle in a multi-player deal.

A tough rebounder and rugged defender, the 6’10” Chambers was a key ingredient in Seattle’s attack.  In his first five seasons in the Emerald City, Tommy Gun averaged better than 20 points, six rebounds, and two assists per game.   Despite having talented players like Jack Sikma, Gerald Henderson, Dale Ellis, and Xavier McDaniel, the Sonics posted only one winning season in Chambers’ time in the Pacific Northwest.  When Seattle drafted forward Derrick McKey and traded for up-and-coming Michael Cage, Chambers decided to explore his options.

Prior to this agreement, players were stuck with the team that owned their contract unless they were traded.  Under the new agreement, players who had been in the league seven or more years and had played through two contracts were eligible to negotiate with other teams.  In July 1988, Tom Chambers signed with the Phoenix Suns as the NBA’s first unrestricted free agent.

TC joined a nucleus of talented young players in Phoenix.

The  backcourt featured the talented tandem of Kevin Johnson and Jeff Hornacek.  Sixth Man of the Year, Eddie Johnson, added firepower off the bench, and the Suns obtained forward Dan Majerle in the draft.  In his first year in the desert, Chambers averaged a career-best 25. 7 points per game while leading Phoenix to the Western Conference Finals, where they lost to Magic Johnson and the Lakers.  Chambers could score from anywhere.  He could handle the basketball in the open floor and was effective down low, making him a difficult matchup for opposing forwards.

Chambers established himself as one of the NBA’s best power forwards.  In five years in Phoenix, he made three All-Star teams.  Chambers led the Suns to the longest sustained success in franchise history.  Phoenix won at least 53 games each year between 1989 and 1993.  Playing in the era of Magic In L.A. and Clyde Drexler in Portland, Chambers helped Phoenix reach three Western Conference Finals.  When the Suns obtained Charles Barkley prior to the 1992-93 season, Chambers filled the sixth man role and he was instrumental in getting Phoenix to the 1993 NBA Finals.

The Suns lost to the Chicago Bulls and Michael Jordan in a six-game NBA Final in June 1993.

In the offseason, Chambers accepted an offer to join the Utah Jazz, reteaming with Hornacek and backing up Karl Malone.  The Jazz improved immediately and Chambers, averaged 11.2 points while playing 23 minutes per game, made it the Western Conference Finals in his first season in Salt Lake.  Following his second season in Utah, the 35-year-old Chambers joined Maccabi Tel Aviv in Israel to play one season in the Israeli Super League.  He won the1996 league championship before returning to the U.S and retiring as a player.

Playing for the Suns in March 1990, he scored 60 points against Seattle, one of 25 players in league history to score 60 or more in a single game.  Chambers ranks 38th on the NBA all-time scoring list, and had his number 24 retired when he joined the Suns Ring of Honor in April 1999.  One of the greatest prep players in Colorado history and one of the best Utah Utes of all time, Mr. Chambers was inducted into the Utah Sports Hall of Fame in 2010.

Chambers, 59, currently resides in Scottsdale, where he works in community relations with the Suns.  He is an active volunteer for the Phoenix chapter of the Society of St. Vincent De Paul, a non-profit organization dedicated to helping to feed, clothe, house and heal the needy in central and northern Arizona.  Mr. Chambers regular assists SVDP, which serves 4,000 meals every day in five dining rooms.  For the past 12 years, Chambers has served as a Suns analyst for FOX Sports Arizona.

On this date in 1990, Tom Chambers scored 25 points and played 37 minutes to help pace the Phoenix Suns to a 126-103 win over the Magic in Orlando.  It was the Suns’ 22nd win of the season, a year in which they would go 54-28 before losing to the Portland Trail Blazers in the Western Conference Finals.