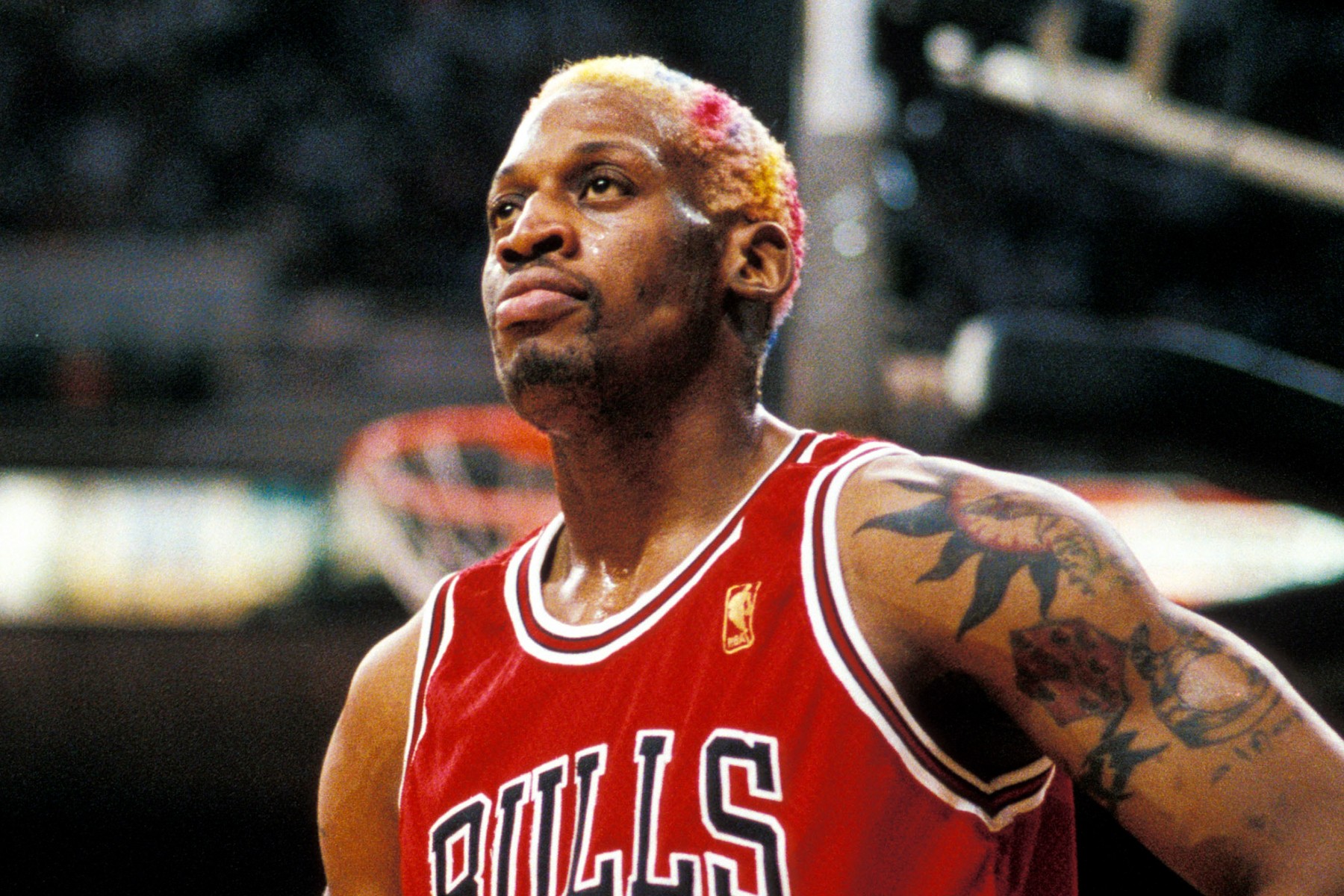 Dennis Rodman played for five teams over 14 NBA seasons.  A tireless worker, he led the league in rebounds-per-game for a record seven straight years.  Rodman was a tenacious defender who was always assigned to the opposing team’s best scorer.  The two-time NBA Defensive Player of the Year was named All-Defensive First Team seven times.  Loud, flamboyant and brash, Rodman was also brilliant, doing the dirty work for teams that won five NBA championships.  Despite standing only six-eight, “The Worm” was arguably the best rebounding forward in NBA history.  Rodman grabbed nearly 12,000 rebounds and has a higher rebounds-per-game average than Dwight Howard, Moses Malone and Charles Barkley.  Playing small forward in his early years and moving to power forward later, Rodman hauled in 30 or more rebounds five times in his career and grabbed 29 on two other occasions.

The Worm holds more than ten NBA records, including most seasons leading the league in total rebounds.  He is the oldest player [37] to win the NBA rebounding title and has the highest single-season [29.7] and career [23.4] rebounding percentage.  In a game against the Indiana Pacers in March 1992, Rodman grabbed 34 rebounds – 18 of them offensive.  The Pacers had 38 as a team.  Nine of Indiana’s rebounds were offensive, meaning Rodman had twice the opponent’s total.

Born in Trenton, New Jersey, May 13, 1961, Dennis Keith Rodman was raised in the hardscrabble Oak Cliff section of Dallas, Texas.  His father, Philander, left when Dennis was three, leaving his mother Shirley to raise young Dennis and his two younger sisters alone.  At South Oak Cliff High School, the Rodman sisters won three state high school basketball titles before both playing collegiately [Kim won two national titles with Louisiana Tech].  Only 5’6” as a ninth grader, Dennis was cut from the South Oak Cliff freshman football team and was devastated.  He grew to 5’9” as a senior but always felt like an outcast.  He made the varsity basketball team, but saw little playing time.  “I couldn’t even make a layup,” Rodman later said.  With no prospects for college, he worked the night shift as a janitor at Dallas-Fort Worth Airport.

Between 19 and 21, Rodman grew nearly a foot, to 6’8”.  Shy, introverted and unhappy, his clothes didn’t fit, and Rodman refused to leave the house because he felt so odd.  Wanting to try playing basketball again, he enrolled at Cooke County Junior College [now North Central Texas College]in Gainesville, Texas.  He averaged more than 17 points and 13 rebounds before flunking out after one semester and returned to Dallas.  Rodman then transferred to Southeastern Oklahoma State, a public university in Durant, Oklahoma, and alma mater of country music’s Reba McEntire. In his first year, with virtually no experience in organized basketball, The Worm averaged 26 points and 13 rebounds per game.  At Southeastern, Rodman was a three-time NAIA All-American, twice led the NAIA in rebounding and shot .637 from the field.  After being named MVP of the Portsmouth Invitational Tournament, a pre-draft camp for NBA prospects, he was selected by the Detroit Pistons with the 27th overall pick of the 1986 NBA draft.

Sandwiched between the Lakers/Celtics dominance of the 1980s and Chicago Bulls’ run in the 90s were the “Bad Boys,” – the Detroit Pistons, the team fans loved to hate.  Rodman personified the Bad Boys, putting a body on stars like Larry Bird, Michael Jordan, Magic Johnson on the defensive end of the floor, diving into the stands for loose balls, and aggravating opponents.  The selfless Rodman was an integral part of the Bad Boys, helping Detroit to back-to-back NBA titles while being named the league’s Defensive Player of the Year in both 1990 and 1991.  The Worm played seven seasons with the Pistons.  In his final two seasons in the Motor City, Rodman averaged more than 18 rebounds per game.  In October 1993, he was traded to the San Antonio Spurs.

Rodman first showed signs of erratic behavior in San Antonio.  Before the first game of the 1993 season, he dyed his hair blonde.  During the season, he head-butted players, refused to leave the court after being ejected, and had a highly publicized affair with Madonna.  After two tumultuous seasons in San Antonio, Rodman was dealt to the Chicago Bulls prior to the 1995-96 campaign.  Considered a risk at the time, the trade for the 34-year-old Rodman worked out beautifully for the Bulls, who were looking to fill the huge void left by the departure of Horace Grant one year earlier.  Playing alongside Michael Jordan and Scottie Pippen, Rodman helped Chicago to an NBA-record 72 wins while winning his fifth straight rebounding title.  In June 1996,  the Bulls breezed to their fourth NBA championship in six years.
While the Bulls won championships, Rodman continued to garner rebounding titles and act bizarrely.  In January 1997, he kicked a cameraman in the groin, paid a $ 200,000 settlement, and was suspended for 11 games without pay [costing Rodman $ 1 million].  Despite Rodman’s antics, Chicago bettered the Utah Jazz in the Finals to successfully defend their NBA title.  The aging Rodman continued to be productive on the court and unpredictable off of it.  In 1997-98, he grabbed 20 or more rebounds 11 times and was a vital cog in the Bulls machine that returned to the Finals.  Prior to Game Four, he skipped a team workout to take part in a wrestling match with Hulk Hogan in Detroit.  Rodman was fined $ 20,000 —  less than a tenth of what he had been paid for breaking a chair over his opponent in the ring.  He returned to help Chicago down the Utah Jazz in six games.

The Bulls cleaned house after the 1998 season.  Jordan, Pippen, Steve Kerr and Phil Jackson all left.  Rodman was released and signed by the Los Angeles Lakers, who released him after 23 games.  He joined the Dallas Mavericks but was waived after a dozen games.  The Worm retired from basketball and tried to reinvent himself.  He became a part-time professional wrestler, appeared in several reality TV series, and tried his hand at acting.  He played the lead role in Double Team, an action film that earned the former power forward a Golden Raspberry Award – the “Razzie” – in recognition of the worst in film.

Mr. Rodman attempted comebacks in the American Basketball Association, Mexican League, and played professionally in Finland, Great Britain and the Philippines.  In November 1998, he married former Playboy model and Baywatch star Carmen Electra, then filed for an annulment ten days later.  The volatile Rodman has been entangled in a litany of legal issues since his playing days ended, including multiple arrests for DUI and domestic disturbances.   Pierced, tattooed and wildly unpredictable, he was one of the most recognized athletes in the world.  A five-time world champion and two-time All-Star, Dennis Rodman was inducted into the Naismith Basketball Hall of Fame in 2011.