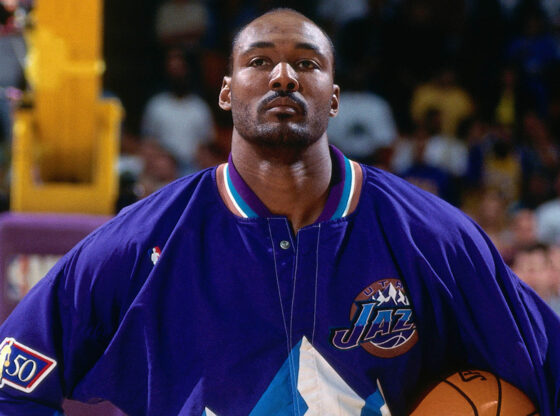 “Neither snow nor rain nor heat nor gloom of night
stays these couriers from the swift completion of their appointed rounds.”

Over the course of 19 NBA seasons, Karl “The Mailman” Malone always delivered.

Arguably the greatest power forward of all time, Malone could do it all.  Built more like a tight end than a basketball player, his size and strength made him hard to guard.  At 6’9” and 256 pounds, Malone could pass, rebound, defend and score.  He ran like a gazelle, filling the lane on the fast break and usually ending it with a thunderous dunk.  Playing in nearly 1,500 NBA games, Malone averaged more than 25 points and 10 rebounds per contest.  Mailman was difficult to move in the low post.  With soft hands and a deadly mid-range jumper, he finished with 36,928 career points, second only to Kareem Abdul-Jabbar for most in NBA history.  Malone attempted more free throws and grabbed more defensive rebounds than any player ever has.  The two-time league MVP was named First-Team All-NBA eleven times, tying him with Kobe Bryant for the most in history.

Displaying a relentless work ethic, Malone willed himself to greatness. “In 30 years,” observed Jazz strength coach Mark McKown, “I’ve never seen anybody with the same capacity for work, the same drive, or the same intensity.” As a rookie, Malone made less than 50 percent of his foul shots.  Four years later, he improved to better than 75 percent, and led the league in free throws-made a record seven times.  With a passion for fitness only matched by his love of hunting and fishing, Malone embodied the power forward position.  At a chiseled 256 pounds, he had a 31-inch waist.  In 18 seasons with the Jazz, Malone missed just ten games.  He played in all 82 games nine times.  Consider this:  Malone played in 1,434 of a possible 1,444 NBA games, missing three of them because of a suspension.  At 40, he became the oldest player to log both a triple-double and be a starter on an NBA Finals-bound team.

Born in Summerfield, a small Louisiana town near the Arkansas border, on this date in 1963, Karl Anthony Malone is the youngest of nine children.  Raised on a farm by a single mother, Malone was a country boy who loved to hunt and fish.  After leading Summerfield High School to three straight Louisiana Class C state basketball titles, Malone opted to stay near home and enrolled at Louisiana Tech, alma mater of hall of fame quarterback Terry Bradshaw.  A three-time All-Southland Conference selection, Malone led the Bulldogs to the NCAA tournament for the first time in school history in 1985, where they lost to top-seeded Oklahoma, 86-84, in the Sweet 16.  After averaging 18.7 points and 9.3 rebounds per game in three collegiate seasons, Malone chose to leave Louisiana Tech following his junior year and declare for the NBA draft.

The greatest power forward ever to play was the 13th overall selection of the 1985 NBA Draft, between Kenny Green and Alfredrick Hughes.  Malone was picked behind Benoit Benjamin, Keith Lee and Ed Pickney, all of whom became NBA journeymen.  “I was sitting there watching the draft,” said Frank Layden, who would coach Malone for three seasons with the Utah Jazz,  “and as I watched guys like Joe Kleine, Jon Koncak and Detlef Schrempf go ahead of Karl, I asked myself ‘Is there something the matter with this guy?  Is there something about this guy we don’t know?  Is he sick or something?’”  For the next two decades, Karl Malone made rival coaches and general managers plenty sick.

“He has the total package,” said long-time NBA coach Del Harris.  “He reminds me of Elvin Hayes in his prime.  He takes the ball right to the hole the way Elvin used to.”

Karl Malone and John Stockton formed the most dynamic duo in NBA history.  In the 18 seasons they played together, the Jazz never missed the playoffs.  Their run is the second longest streak of consecutive playoff appearances in NBA history, behind only the San Antonio Spurs.  The most consistent guard-forward combination ever to play the game are forever linked.  They are the first tandem to be named All-Star Game MVPs, when they shared the award at the 1993 contest in Salt Lake City.  Running the pick and roll to perfection, Stockton to Malone became an NBA maxim.  The two played 1,412 games together, most-ever for two players on the same team, yet they never won a championship.  The Jazz twice reached the NBA Finals – in 1997 and 1998 – losing both to Michael Jordan and the Chicago Bulls.

In 1996, Malone was named to the NBA’s 50th Anniversary All-Time Team.  The 1983 Southland Conference Player of the Year had his Number 32 retired by Louisiana Tech and is a member of the school’s Athletic Hall of Fame.  Malone is the Jazz’ all-time leader in points, rebounds, games played, minutes played, free throws attempted, and free throws made.  He is second — to Stockton – on the franchise’s all-time steals and assists list.  Following his retirement in 2004, the Utah Jazz also retired Mr. Malone’s Number 32.

Happy 54th birthday to a two-time MVP and Olympic gold medal winner, 14-time All-Star and member of the Basketball Hall of Fame.

I like to think I have some finesse to my game, but inside the paint is where men are made.

If you can’t play there, you should be home with your mama.  — Karl Malone