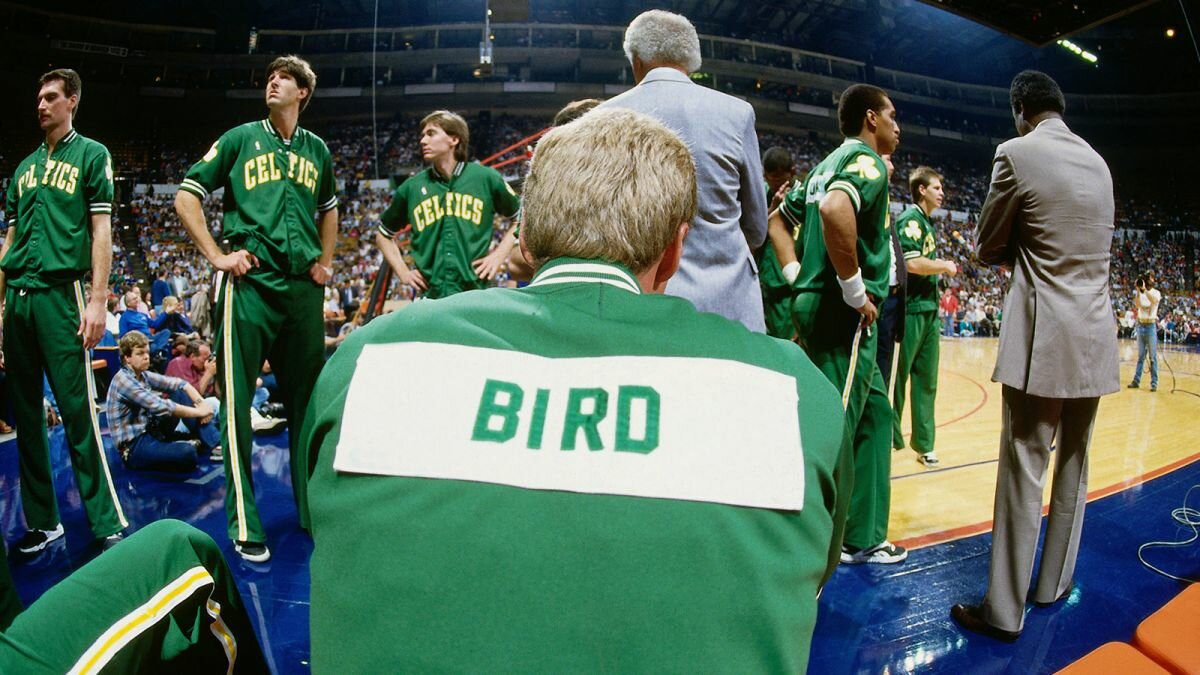 Unflappable and unstoppable, Larry Bird was one of the most clutch performers in basketball history.  In 13 NBA seasons—all with the Boston Celtics—Bird played in a dozen All-Star Games, won three straight league MVP awards [the first non-center to do so], and was named first team All-NBA nine times.  Known for his hustle, consistency, excellence and extraordinary basketball intelligence, Bird made those around him better.  A fierce competitor, Larry Bird embodied Celtics pride.  He could score, pass, rebound, and defend and was one of the greatest team players ever to play the game. The 6’9”, 220 pound small forward was a deadly shooter whose confidence and toughness made him one of the greatest Celtics of all time—and one that will be forever linked with Earvin “Magic” Johnson [Daily Dose, 8/14/15].

Born in West Baden, Indiana, on this date in 1956, Larry Joe was the fourth of Joe and Georgia Bird’s six children.  His father was a Korean War veteran who worked mostly in construction and drank, while Bird’s mother worked long hours as a cook at Flick’s.  The family was poor and by seventh grade young Larry was working 40 hours a week at a local market.  Bird attended Springs Valley High School in nearby French Lick, playing on the junior varsity basketball team as a 6’1” sophomore before breaking an ankle and missing much of the season.  He grew to 6’3” as a junior and began to attract attention regionally.  Despite French Lick having a population of 2,059, over 1,600 fans would routinely show up to watch Bird’s high school games.  After sprouting to 6’7” by his senior year, Bird scored 55 points in one game and grabbed 38 rebounds in another.  He averaged 30 points and 20 rebounds per game to earn Third Team All-State honors as a senior.  Springs Valley finished with a 21-4 mark and 4,000 fans attended Bird’s final home game.  He graduated in 1974 as the Blackhawks’ all-time scoring leader.

Following high school, Bird received a basketball scholarship to Indiana University [Daily Dose, 3/31/16].  Feeling pressured to play in the Big Ten by the hometown folks, Bird arrived in Bloomington in August 1974.  Overwhelmed by the size of the school, he left IU after 24 days on campus.  Without telling anyone—his parents had divorced when Bird was in high school and his father committed suicide a short time later–Bird hitchhiked 50 miles south to French Lick.  “People naturally think it was trouble between Coach Knight [Daily Dose, 10/25/16] and me, but it wasn’t,” explained Bird.  “The school was just too big.  I was a homesick kid who was lost and broke.”  He enrolled at Northwest Institute, a junior college in West Baden, before quitting to work on a garbage truck.  Bird had quit two colleges in five months.  In 1975, Bill Hodges convinced Bird to come to Terre Haute and play for him at Indiana State University.

Indiana State had been 12-14 in each of the two seasons before the arrival of Larry Joe Bird for the 1976-77 season.  After averaging 30 points and ten rebounds in his first year, attendance tripled at ISU home games.  Bird was named All-American as a junior and inspired a song entitled, “Indiana’s Got a New State Bird.”  The Boston Celtics selected Bird with the sixth overall pick of the 1978 NBA draft, but he did not sign immediately, choosing instead to play out his final season at Indiana State.  The Sycamores had never reached the NCAA tournament, yet found themselves undefeated and in the national title game in March 1979.  In the most-watched basketball game in television history, Magic Johnson led the Michigan State Spartans to a 75-64 victory over Indiana State.  Despite failing to win the championship, Bird won seven different national Player of the Year awards, was named All-American and finished his career at ISU with a 81-13 record while becoming the school’s all-time scoring leader.

The once-proud Boston Celtics had fallen upon hard times in the late 1970s, finishing the 1979 season 29-53.  After signing the richest rookie contract in league history, Larry Bird led Boston to a 32-game turnaround and a first-place finish in the Eastern Conference.  Bird was selected to his first All-Star Team and was named 1980 Rookie of the Year.  After obtaining Kevin McHale and Robert Parrish in the off-season, Boston beat the Houston Rockets to win the 1981 NBA title.  Three years later, he was named league MVP in route to defeating Magic Johnson and the Los Angeles Lakers in seven games to win the second championship of his career.  Bird was named Finals MVP after averaging 27 points and 14 rebounds in the series.  The following year, Bird repeated as NBA MVP but Boston lost in the Finals rematch with L.A.

The 1986 Celtics are considered one of the greatest teams in NBA history.  After losing only three games throughout the entire playoffs, Bird led Boston to another title while becoming just the third player in NBA history to win three straight MVP Awards.

Bird was a trash-talker of epic proportions.  Before the inaugural Three Point Shootout during NBA All-Star Weekend 1986, he entered the locker room and said, “I want all of you to know I am winning this thing.  I’m just looking around to see who’s gonna finish up second.”  Late in a tied game against Seattle, Bird told Supersonics forward Xavier McDaniel, who was guarding him, “I’m gonna get the ball right here and bury it in your face.”  After a timeout, Bird posted in the exact spot he had told McDaniel he would before scoring in his opponent’s face to give Boston the lead, telling McDaniel “I didn’t mean to leave two seconds on the clock.”  Prior to a Christmas Day game between Indiana and Boston, the Pacers’ Chuck “The Rifleman” Person stated, “The Rifleman is coming, and he’s going Bird hunting.”  Before tip-off, Bird told Person that he had a Christmas present waiting for him.  During the game, when Person was on the bench, Bird shot a three-pointer from the corner right in front of Person.  Immediately after releasing the ball, Bird turned to Person and said, “Merry ^%&* Christmas!” and then the shot went in.  As a rookie, Reggie Miller tried to disrupt Bird’s concentration while he was shooting free throws late in a game.  After making the first free throw, Bird glared at Miller and said, “You got to be kidding me.  Rook, I’m the best shooter in the league right now.  In the league.  Understand?  And you’re up here trying to say something?”  Bird then buried the second free throw.

Injuries began to take their toll in the late 1980s, as Bird underwent surgery to remove bone spurs in his heels in November 1988 and missed the rest of the season.  A bad back limited him to 60 games the following season and Bird underwent back surgery in June 1991.  After playing in only 45 games in 1991-92, Larry Legend retired in August 1992.

Larry Bird won three NBA titles and ten Atlantic Division crowns in 13 seasons in Boston.  The 1986 AP Athlete of the Year was also a three-time NBA Shootout champion and member of the NBA’s 50th Anniversary All-Time Team.  He was 1998 NBA Coach of the Year and 2012 NBA Executive of the Year, making Mr. Bird the only man in history to win the league’s MVP, Coach of the Year and Executive of the Year awards.  He won a gold medal as part of the original “Dream Team” in 1992 [Daily Dose, 9/21/15].  Bird was inducted into the Naismith Basketball Hall of Fame in 1998 and had his number 33 retired by the Celtics.

– Earvin Johnson, speaking at his friend and rival’s retirement party