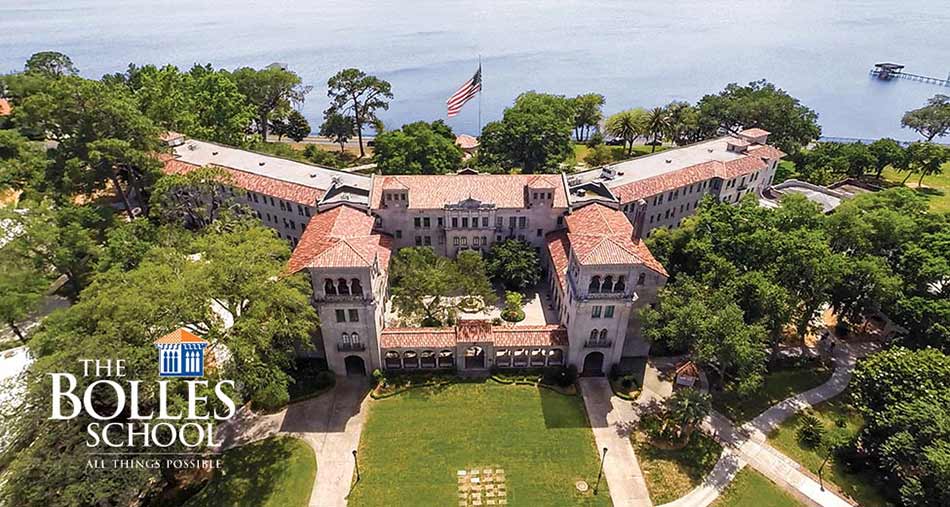 The Bolles School has one of the top high school athletic programs in the United States.

Bolles has captured 131 state team titles and 90 state runner-up finishes in 17 different sports.  The school has claimed eleven Florida high school titles in both football and boys crew, and has earned 21 Final Four berths in baseball.  Bolles has sent athletes to the NFL, NBA, NHL, LPGA, and MLB.  In July 2018, Bolles grad Chipper Jones [class of 1990], was inducted into the Baseball Hall of Fame on the first ballot.

The Bulldogs have won more than 470 team district titles in 22 different sports, including weightlifting, softball, volleyball and girls basketball.  Bolles has won the Cary McDonald Award, presented annually by the Florida Athletic Coaches Association for the top athletic programs in the state, 38 times.  In addition, the Bolles School earned the prestigious Sunshine Cup All-Sports Award for the 23rd time in 2018.

Established in 1933 as a military school for boys in grades 7 through 12, Bolles is a private college preparatory day and boarding school in Jacksonville.  It has a lower school [PreK – 5], a middle school [grades 6-8] and a high school, spread across four campuses around greater Jacksonville.  Named for philanthropist Richard J. Bolles, the school dropped its military affiliation in 1962 and began admitting girls in 1971.  Today, Bolles has an equal number of male and female students.

The high school – known as the Upper School –  sits on 52 leafy acres along the banks of the St Johns River.  Located at 7400 San Jose Boulevard, the main building opened in 1925 as the San Jose Hotel.  It was converted to a school eight years later, and by the late 1930s was attracting international students.  The Upper School provides resident housing for up to 60 male boarders, and offers both five and seven-day boarding options.

Bolles aims to prepare students for college and life.  Its motto is “Pursuing excellence through courage, integrity and compassion.”  Governed by a Board of Trustees, Bolles offers more than 80 service organizations on the San Jose campus and 40 fine and  performing arts opportunities throughout the school year.  Tuition at the Upper School for the 2018-19 school year is $ 26,190 for day students, and $ 53,490 for resident [boarding] students.

A swimming and diving powerhouse,  Bolles has won 40 Florida high school boys state swimming titles, including the past 31 in a row.  The Lady Bulldogs have won 32 state crowns, including the last 28 straight — second only to the Carmel High School girls team, which claimed a record 32ndconsecutive state title in 2018.  The 2012 boys squad – dubbed the Dream Team – featured three future Olympians.  In November 2012, the Dream Team broke five national high school records at the Florida 1A state championships.

Bolles has had swimmers compete at each Olympics since 1972.  A total of 50 Bolles swimmers have participated in the Olympics, capturing 20 medals.  Bolles coaches have also had a presence at the Summer Games since 1988.  The Bulldogs have claimed 17 national high school swimming and diving titles — nine in girls and eight in boys — along with seven national runner-up finishes.  Five Bolles swimmers competed in the 2016 Rio Games.  Ryan Murphy captured three gold medals, while Joseph Schooling claimed one.  Freestyler Caeleb Dressel, who did not attend Bolles but trained with the Bolles Sharks club program, earned a gold medal in Rio as part of the 400 Medley Relay team.

After graduating with Honors from the Bolles School in 2009, Amelia Lewis joined the LPGA Tour at 19.  A three-time Florida High School Player of the Year, Lewis has amassed over $ 540,000 in career earnings as a pro.  The first pick of the 1990 MLB draft, Chipper Jones was All-State in both football and baseball at Bolles.  As a junior, the slugging pitcher/outfielder led the Bulldogs to the 1989 state baseball title.  As a senior, Jones propelled Bolles to a state runner-up finish while being named Florida Baseball Player of the Year.

Former catcher Rick Wilkins played eleven big league seasons after graduating Bolles in 1985.  Austin Slater and D.J. Stewart were teammates on the 2011 Bolles baseball team.  After three years at Stanford, Slater was an eighth-round pick of the San Francisco Giants in 2014.  Slater has spent the past two seasons with the Giants.  Following four seasons at Florida State, the Baltimore Orioles selected Stewart with their first pick of the 2015 amateur draft.

The Bolles School has played for the Florida state high school football championship 17 times, winning eleven.  Ten of those titles came under the direction of the legendary Corky Rogers, the winningest coach in Florida high school history and 2005 National High School Coach of the Year.  Health woes forced Rogers to step down in 2017.  The Bulldogs are now led by Wayne Belger, Rogers’ long-time assistant.

Bolles has sent a dozen players to the NFL, including placekicker David Treadwell, who was an All-American at Clemson before kicking for six seasons in the NFL.  Brothers Nathan and John Theuswent from Bolles Bulldogs to Georgia Bulldogs.  Both were four-year starters at UGA before going on to the NFL.  Bolles continues to produce outstanding football talent.  The 2017 team sent eleven players to the college ranks.

One of the best basketball players Bolles ever produced is Dee Brown, who was a first-round pick of the Boston Celtics in the 1990 NBA draft.  After making the All-Rookie Team in his first year, Brown won the 1991 NBA Slam Dunk Contest with a “no look” dunk.  After playing 12 NBA seasons, Brown worked as a studio analyst for ESPN and later served as a coach and executive in the NBA.  Brian Ferlin graduated from the Bolles School in 2010, then played hockey at Cornell.  The Ivy League’s top rookie was drafted by the Boston Bruins in 2011 and made his NHL debut with the B’s in February 2015.