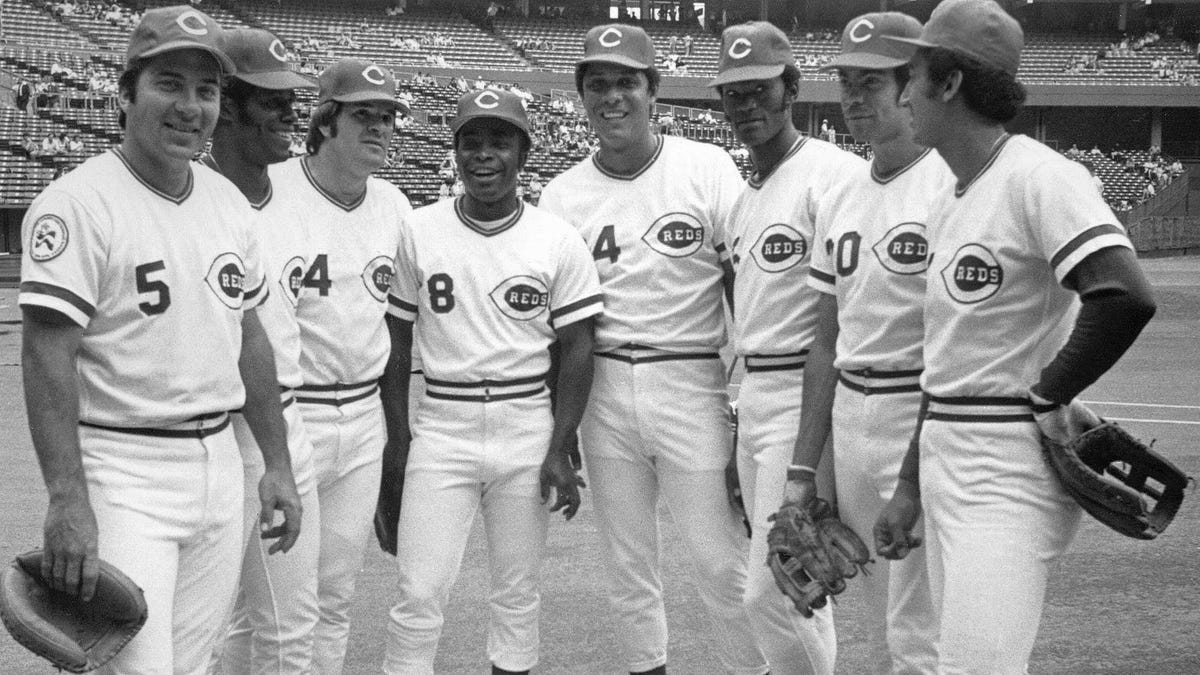 The Cincinnati Red Stockings were the first professional baseball team in America, becoming one of the charter members of the new National League in 1876.  They quickly ran afoul of league president William Hulbert for selling beer during games and playing on Sundays and were expelled from the league.  Following a nine year stint in the American Association, the club shortened its name to “Reds” and, along with the Brooklyn Bridegrooms, rejoined the National League for the 1890 season.  Eight decades later, they became the one of the most formidable franchises in the history of baseball.

General Manager Bob Howson joined the Reds in 1967.  He inherited Gold Glove outfielder Pete Rose, 1967 All-Star Game MVP Tony Perez, and 1968 Rookie of the Year Johnny Bench.  Prior to the 1970 season, Howson hired rookie manager George “Sparky” Anderson to lead the team, which was set to move its home games from Crosley Field to sparkling new Riverfront Stadium.  Led by Bench, who had the finest statistical season of his career and, at 22, became the youngest MVP in National League history, the Reds breezed through the 1970 season with a record of 102-60 to win the NL West by 14 ½ games.  After sweeping the Pittsburg Pirates to take the NL pennant, they were clipped by Earl Weaver’s [Daily Dose, 7/11/16] Baltimore Orioles, four games to one, in the World Series.  After a disastrous 1971 season [their only losing season of the decade] Howson obtained second baseman Joe Morgan, centerfielder Cesar Geronimo and right-handed starter Jack Billingham from Houston in one of the most lopsided trades in baseball history.  In 1972, the Reds finished first in the NL West, with Bench repeating as league MVP.  Cincinnati beat Pittsburg in an exciting five game series for the National League title and earned their second trip to the World Series in three years before losing to the Oakland A’s, who claimed the first of three straight world championships.  The Series was close, with six of the games being decided by one run.

After winning 99 games to take the division in 1973, the Reds were upset by the New York Mets in the NLCS.  The following year, they finished second to the Los Angeles Dodgers and missed the playoffs.  In 1975, the Big Red Machine found another gear, winning their division by 20 games to breeze to the World Series, where they faced the Boston Red Sox, who had swept three-time defending champion Oakland in the ALCS.  In the one of greatest World Series ever played, Boston tied the Series at three games apiece on Carlton Fisk’s walk-off home run in the 12th inning.  Less than 24 hours later, Morgan hit a bloop single in the ninth inning to score Ken Griffey [Daily Dose, 8/31/16] and deliver Cincinnati its first world championship in 35 years.  The 1976 Reds finished 102-60, down from the prior season, when they went a gaudy 108-54.  They swept Philadelphia in the NLCS and the New York Yankees in the World Series to become the only team in history to go undefeated in the postseason.  The Big Red Machine was the first NL team to win back-to-back world championships since the New York Giants did it in 1921 and 1922.

In the seven seasons from 1970 to 1976, the Cincinnati Reds won five division titles, four National League pennants, and two straight World Series titles.  They averaged 98 wins a season and posted a .607 winning percentage.  The Reds featured six league MVPs, four NL home run leaders, three batting champions, 25 Gold Glove winners and 63 collective All-Star Game appearances.  The Big Red Machine—which featured three Hall of Famers in Bench, Morgan and Perez–appeared in more World Series during the 1970s than any other team.  They played in the fiercely competitive NL West Division, where they battled annually against the Dodgers, fought Pittsburg and the Philadelphia Phillies for the NL pennant, and faced perennial powers Oakland, Boston and Baltimore in the World Series.

Joe Morgan calls the 1976 Reds “the best team ever.”  That squad—known as the “Great Eight”—boasted six players that were selected to the All-Star team five or more times. Seven of the eight Reds’ starters made the 1976 All-Star Team.  The one who didn’t—Cesar Geronimo—hit .307 and won his third straight Gold Glove.  The Great Eight played 88 games together, going 69-19 for a .784 winning percentage.  They led both leagues in ten major offensive categories, something no team has ever done. The Great Eight included Rose, who is baseball’s all-time hits leader; Bench, widely considered the finest catcher ever to play the game, and Morgan, who statistician/historian Bill James ranks as the best second baseman in history.  Tony “Big Cat” Perez was a seven-time All-Star and one of the premier run producers of his generation.  Shortstop Dave Concepcion won five Gold Gloves and was a nine-time All-Star, Geronimo won five Gold Gloves playing centerfield, while George Foster and Ken Griffey Sr. provided power.  Sparky Anderson, called “Captain Hook” for removing his starting pitchers in the sixth or seventh inning—which is commonplace today—orchestrated it all, and did so without ever having a pitcher on his staff worthy of Cy Young consideration.  Because of their lack of dominant pitching, the 1976 edition of the Big Red Machine is probably second only to the 1927 New York Yankees as the greatest team in major league history.

The Big Red Machine—a name coined by Cincinnati Inquirer sportswriter Bob Hertzel in the summer of 1969—sputtered following the 1976 season.  Tony Perez, whom Sparky Anderson called, “the leader, and heart and soul of the team” was traded to the Phillies in the offseason, where he was joined by Rose two years later.  Morgan was traded in 1979 and, by the end of the decade, injuries had diminished Bench’s productivity.  After finishing second to the Dodgers in the NL West for two straight seasons, Cincinnati fired Anderson following the 1978 campaign.  He was replaced by John McNamara, who led them to a division title before being swept by the “We Are Family” Pirates, who would go on the win the World Series, in the 1979 NLCS.

On this date in 1984, Sparky Anderson managed the Detroit Tigers to their 100th win of the season, becoming the first skipper in MLB history to manage 100-win teams in both leagues.  Mr. Anderson is also the first manager in history to win a World Series title in both leagues.  Sparky was named AL Manager of the Year in 1984 and 1987.  Despite winning four NL pennants, two World Series, and guiding the best team of the 1970s, he never won a Manager of the Year award in the National League.  Anderson was inducted into the Baseball Hall of Fame in 2000.