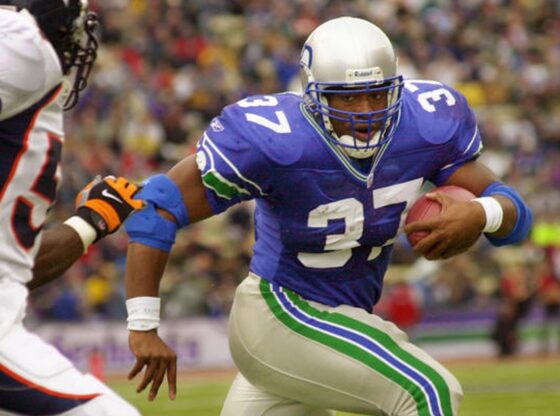 The shelf life of an NFL running back can be short.

Shaun Edward Alexander was born in Florence, Kentucky—just across the Ohio River from Cincinnati—on this date in 1977.  He attended Boone County High School where, in addition to excelling in baseball and basketball, he served as class president every year.  Alexander also played football.  After playing for the JV team as a freshman, he rose to varsity and, as a sophomore, became the starting running back midway through the season.  In his junior year, Alexander ran for 42 touchdowns—including seven in one game—and nearly 2,400 yards in leading the Rebels to the state semifinals.  In January 1994, he appeared in the “Faces in the Crowd” section of Sports Illustrated.  Alexander’s senior season was spectacular.  He rushed for 3,166 yards and a state record 54 touchdowns in route to being named Kentucky’s “Mr. Football,” an honor that would go to Tim Couch, the future first overall pick of the 1999 NFL Draft, the following season.  Alexander, who again scored seven touchdowns in a single game again as a senior, was named Parade “High School Player of the Year,” was listed as the number-one recruit in American by ESPN and joined Charles Woodson [Daily Dose, 2/10/16] on the USA Today All-America team.  After finishing his high school career with 6,657 yards and 110 touchdowns, Alexander narrowed his college choices to Michigan, Alabama, and Notre Dame—where his older brother Darren played drums in the Fighting Irish marching band.  He chose Alabama, preferring the warm weather and opportunity to play for Gene Stallings, and arrived in Tuscaloosa in the autumn of 1995.

As a redshirt freshman, Alexander rushed for a school-record 291 yards in a 26-0 victory over LSU, one of ten wins the Tide would enjoy in 1996.  The following year was more difficult, as Alexander finished with 415 rushing yards and three touchdowns while ‘Bama limped to only four victories.  He rebounded to be named All-SEC as a junior and entered his senior campaign as a Heisman Trophy hopeful.  In 1999, Mr. Alexander led Alabama to the SEC championship, including a win over hated-rival Auburn in the Iron Bowl.  He was named All-America, SEC Player of the Year, and left Alabama with 50 career touchdowns and 15 school records, including 3,565 rushing yards.  In April 2000, he was taken by the Seattle Seahawks with the 19th overall pick of the NFL draft, between Chad Pennington and Stocker McDougle.

After backing up Ricky Watters as a rookie, Shaun Alexander broke out in his sophomore season.  In a Sunday Night Football game against the Raiders, he reeled off an 88-yard touchdown run and gained a franchise-record 266 yards.  Alexander finished the year with over 1,300 yards while scoring 14 touchdowns.  The following season, he scored a record five touchdowns in the first half of a prime-time, nationally televised game against the Minnesota Vikings and finished 2002 with a franchise-record 16 touchdowns.  Alexander continued his dominance in 2003 and 2004, rushing for over 3,100 yards, scoring 30 touchdowns and earning two consecutive trips to the Pro Bowl.  In 2005, Shaun Alexander had one of the best seasons in NFL history.  On November 13, he became the first running back to score 15 touchdowns in five consecutive seasons.  Five weeks later, he rushed for 100 yards for the tenth time of the season.  On New Year’s Day he scored his 27th touchdown of the season, an NFL record later broken by LaDainian Tomlinson.  Alexander also led the league in rushing and garnered a host of post-season honors, including league MVP, Offensive Player of the Year, Running Back of the Year, Bert Bell Award, and First Team All-Pro.  After signing the richest contract in NFL history in March 2006, the Seahawks released offensive guard Steve Hutchinson, severely weakening their offensive line.  Three weeks into the 2006 season, Alexander broke his foot and only played in ten games all year.  The following year, he suffered wrist, knee, and ankle injuries, finishing with 716 yards and four touchdowns.  Seattle cut Alexander in April 2008.  He was signed by the Washington Redskins but retired after playing only four games.

During the five year period from 2001 to 2005, Shaun Alexander rushed for 7,504 yards, scored 87 touchdowns and went to three Pro Bowls.  He averaged 17 touchdowns a season and gained over 1,000 yards in each.  At 5’11” and 228 pounds, Alexander’s career statistics are better than those of Earl Campbell [Daily Dose, 5/2/16], a Hall of Famer with a short shelf life.  Alexander rushed for 100 touchdowns—still a franchise record and 14th on the NFL’s all-time list.  He amassed over 1,500 receiving yards and scored a dozen touchdowns through the air.  Mr. Alexander scored five touchdowns in one game at the high school, Division I, and NFL level and was elected to the NFL 2000s All-Decade Team in 2009.