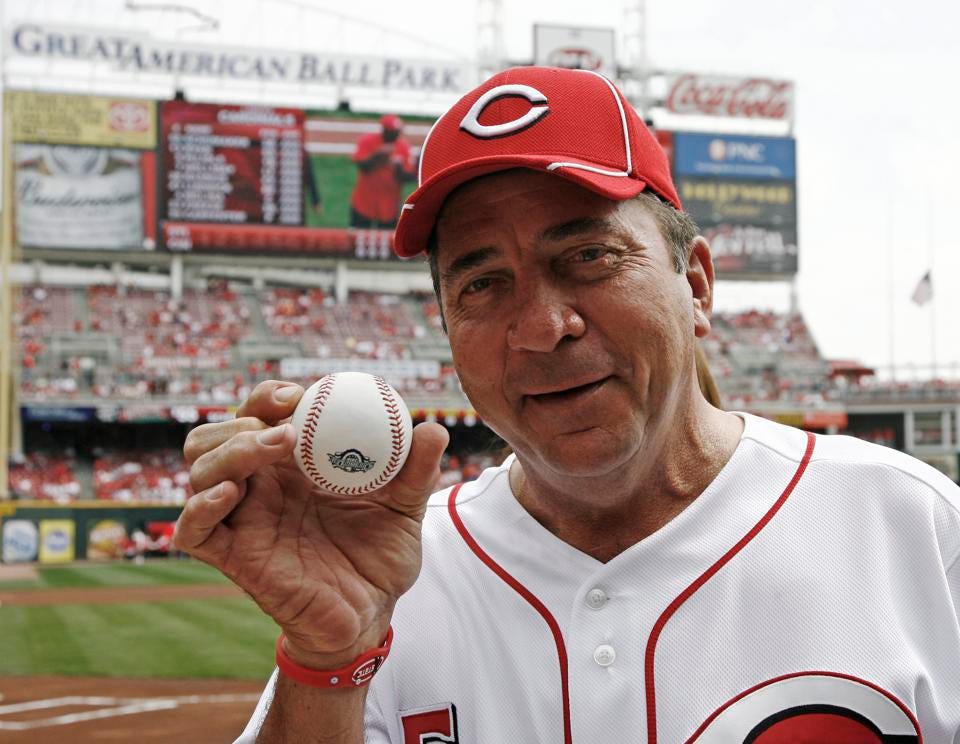 Johnny Lee Bench was born in Oklahoma City, Oklahoma, on this date in 1947. He grew up in Binger—a tiny town about an hour’s drive from OKC—as the third of four children born to a father who drove trucks and a mother that was a homemaker. Johnny picked cotton, delivered newspapers and played sports. His favorite sport was basketball and his exceptionally large hands enabled him to palm the ball. Bench also played baseball and could hold seven balls in one hand. His father played catcher for a semi-pro team while serving in the U.S. Army and also coached Binger’s Little League team for several years. He taught the nuances of the catching position to Johnny, who learned to throw a baseball 254 feet—twice the distance from home plate to second base—from a crouched position. Bench pitched as well and used a blazing fastball to dominate players several years older in American Legion leagues, but his father convinced him that the quickest route to the major leagues was as a catcher. Bench graduated as valedictorian of his high school class in June of 1965. Later that month, the Cincinnati Reds selected him with the 36th pick in the major league amateur draft. The 17-year-old Bench turned down college scholarship offers to play both basketball and baseball and reported to Tampa in the Florida State League. The following year, he hit .294 with 22 home runs in the Carolina League and was named Minor League Player of the Year. He spent most of the 1967 season with the Buffalo Bisons, the Reds’ AAA affiliate in the International League, before making his big-league debut on August 28, 1967, and appeared in 26 games for Cincinnati.

In 1968, Johnny Bench emerged as the Reds’ starting catcher during spring training. That season, he caught 154 games and hit .275 with 15 homers and 82 RBI. Bench edged out the New York Mets’ Jerry Koosman in Rookie of the Year voting–the first National League catcher ever to receive that honor—and also earned the first of his ten Gold Glove awards. Two years later, the 22-year-old Bench became the youngest player to win the NL MVP Award after leading the league in home runs [45] and setting a franchise record for RBI [148]. In 1972, the “Binger Banger” led the NL in homers and RBI in route to his second MVP award. The Reds made their second trip World Series trip in three years but lost to the Oakland A’s in seven games. Two seasons later, he became the only catcher ever to lead the major leagues in total bases, with 315. In 1975, Cincinnati would beat the Boston Red Sox in seven games to win what many consider the greatest World Series in history. The following year, “The Big Red Machine” swept the New York Yankees to successfully defend their World Series title. Bench led the way, batting .533 with two home runs in route to being named series MVP. Afterward, Reds manager Sparky Anderson was asked to compare Yankee catcher Thurman Munson with Johnny Bench. Anderson replied, “I don’t want to embarrass any other catcher by comparing him to Johnny Bench.” Bench hit 31 homers and drove in 109 in 1977 but the Reds would only reach the postseason once more, when they were swept by the Pittsburgh Pirates in the 1979 NLCS. “JB” caught in 100 or more games in each of his first 13 seasons. In the last three seasons of his career, Bench only caught 13 games—playing mostly first base or third base—before retiring after the 1983 season.

John Bench played 17 major league seasons, leading the Reds to six division titles, four NL pennants and two World Series championships. He played in 14 All-Star games, earned ten Gold Gloves and collected 2,048 career hits. At the time of his retirement, Bench was the career home run leader for catchers [389] and ended his career with a .991 fielding percentage. Bench popularized the hinged catcher’s mitt, introduced the catching helmet and pioneered one-handed catching. He was skillful at handling pitchers, possessed unparalleled defensive skills, was durable, and had a quick, powerful arm. Bench is the highest-ranking catcher on The Sporting News list of the 100 Greatest Baseball Players, was named to MLB’s All-Century Team and was selected to the All-Time Rawlings Gold Glove Team. Since 2000, the Johnny Bench Award has been given annually to the best catcher in college baseball. John Bench was elected to the Baseball Hall of Fame in 1989, appearing on 96 percent of the ballots, the third-highest percentage at that time.

Johnny Bench was a 20 year old rookie catcher during a Reds spring training game in 1968. Jim Maloney, an eight-year veteran, was on the mound. Bench continually called for breaking balls and Maloney, who had recently strung together four straight seasons with over 200 strikeouts, continually shook him off. Bench visited the mound and bluntly told the veteran, “your fastball’s not popping,” and Maloney’s response is unprintable here. The rookie returned to his position behind the plate and called for a curve, which Maloney shook off. Bench gave in and signaled for a fastball. Maloney delivered and–during his wind-up–Bench dropped his glove and comfortably caught the fastball barehanded.