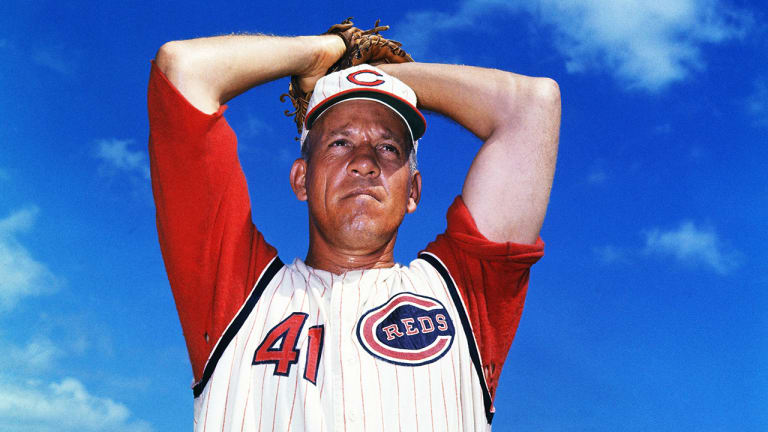 Joseph Henry Nuxhall is the youngest player ever to appear in a major league baseball game.

Born in Hamilton, Ohio—the “City of Sculpture”–July 30, 1928, he was a three-sport standout in football, basketball and baseball for Hamilton High School.  At 6’3” and 190 pounds, Nuxhall was the biggest kid in his class and was playing semi-pro baseball with his father Orville by his early teens.  In the first part of the 1940s, major league baseball was depleted of manpower, as many players had gone off to serve in World War II, including stars like Ted Williams, Joe DiMaggio and Hank Greenberg.  The Cincinnati Reds were interested in signing Orville Nuxhall to fill out their roster, but he was not interested in signing because he had five children.  The scouts then became interested in his son, who was only 14 at the time.  After waiting until the following year’s basketball season was over, Nuxall signed a major league contract with the Reds in February 1944.  With permission from his high school principal, the lefthander was in uniform on Opening Day.

In June 1944, the Reds were hosting the first place St. Louis Cardinals at Crosley Field and trailing 13-0 in the ninth inning when manager Bill McKechnie sent Nuxhall into the game.   The teenager was terrified.  “Two weeks prior to that, I was pitching against seventh-, eighth- and ninth-graders, kids 13 and 14 years old.  All of a sudden, I look up and there’s Stan Musial and the likes.  It was a very scary situation.”  After inducing the first batter he faced, shortstop George Fallon, into a groundout, the teenager ran  into trouble.  Nuxhall was a hard thrower but had little control and was unable to get out of the inning, yielding five walks, two hits, one wild pitch and five runs while only recording two outs.  After two-thirds of an inning, his career ERA was 67.50.  Nuxhall was replaced by Jake Eisenhart, who was also making his major league debut.  Eisenhart retired Cards pitcher Mort Cooper to end the inning before being released two weeks later.  It would be the only major league out Jake Eisenhart would record in his big league career.  Following his appearance with the Reds, Nuxhall was assigned to the minor leagues.  In 1945, he attended spring training with Cincinnati but decided to remain home until he finished high school the following year.  After regaining his amateur status, Nuxall returned to Hamilton High, earning All-State honors in football and basketball his senior year.  Following graduation, he spent the next five years playing in the Reds minor league system.

Joe Nuxhall returned to the Reds in 1952 at age 23.  After pitching in relief for three seasons, he became a starter in 1955, earned a spot on the All-Star team and won a career-high 17 games.  In 1965, he broke Eppa Rixey’s team record of 440 games pitched—a mark that would stand for another decade–before the Reds offered him a job doing radio.  “The Ol’ Lefthander” replaced the retiring Waite Hoyt on Reds broadcasts in 1967.  In 1974, Marty Brennaman was hired, and the “Marty and Joe” tandem entertained Reds listeners for the next 28 seasons chatting about their golf games, gardens and, on occasion, the game of baseball.  “Nuxy”, who continued to pitch batting practice for the Reds into the 1980s, ended every broadcast with his signature sign off, “This is the Ol’ Lefthander, rounding third and heading home.  So long everybody.”  Mr. Nuxall retired as the team’s full-time radio announcer in 2004.  Three years later, he died following a long battle with cancer.

Joe Nuxall is one of the most beloved personalities in Cincinnati Reds history.  After appearing in his first big league game at 15 years, 10 months, 11 days old, he spent 62 of his next 64 baseball seasons with the Redlegs.  In 16 major league seasons, he won 135 games and struck out 1,372 batters.  Nuxhall’s signature sign off is displayed on the outside of Great American Ballpark in Cincinnati and a statue of “Hamilton Joe” decorates the main entrance to the stadium.  Following his death, Mr. Nuxhall was a finalist for the 2008 Ford C. Frick Award [Daily Dose, May 11], bestowed annually on broadcasters who make major contributions to the game of baseball.  On Opening Day 2008, the Reds were introduced wearing 41—Nuxall’s uniform number—and the team wore a dark patch with “Nuxy” printed in white on their uniform sleeve during the 2008 season.  The Ol’ Lefthander was inducted into the Cincinnati Reds Hall of Fame in 1968.

On this date in 1944, Joe Nuxhall made his major league debut before 3,510 fans at Crosley Field in Cincinnati.

“He was the most competitive SOB I ever played with”