Anthony Jerome Webb is one of the shortest players ever to play in the NBA. In fact, there are only three that are officially listed as shorter than him in league history.

Born in Dallas, Texas on this date in 1963, “Spud” tried out for his junior high team but was told he was too small to play. He finally convinced the coach to put him in and scored 20 points in his first game. At Wilmer-Hutchins High School, he was told the same thing. When finally given a chance to play, he led the Eagles to the playoffs and averaged 26 points a game. He was named Player of the Year and was one of 10 players named to the All-State team but was not heavily recruited by Division I-A colleges because of his size. He enrolled at Midland Junior College and led the Chaps to the junior college national title in 1982 while being named a juco All-American. He was noticed by an assistant coach from North Carolina State and invited to visit the school, where he so impressed head coach Jim Valvano during a tryout that he offered him a scholarship. Spud, with a vertical leap of 42”, went on to lead the Wolfpack to the Elite 8 of the NCAA tournament.

The Detroit Pistons selected him in the fourth round [#87 overall] in the 1985 NBA Draft but cut him prior to the start of the season. He was picked up by the Atlanta Hawks and made his debut in October of 1985. He played point guard alongside Doc Rivers and averaged just under 8 points and 16 minutes of playing time per game. The Hawks made the playoffs in five of the six seasons Webb played there but never won a championship. He was traded to Sacramento in 1991 and had his best season that year, scoring 1,231 points. He played for Toronto, Minnesota and Orlando during his 12 year career and also played in Italy for one season.

The highlight of his career came during All-Star weekend in February of 1986 at Reunion Arena in Dallas. Webb was invited to participate in the NBA Slam Dunk Contest against teammate and defending champion Dominique Wilkins, “The Human Highlight Film”, who had never seen him dunk before. The basketball world was shocked when the shortest man ever to participate in the event won it with a reverse two handed “strawberry jam” for a lob bounce off the floor. He recorded two perfect 50 point scores in the final round and made a lasting impact on the event. Twenty years after Webb’s victory in the Slam Dunk contest, he trained New York Knicks point guard Nate Robinson, who stands 5’9” tall, to win the event. Robinson did go on to win, making him and Spud the only two people in NBA history under six feet tall to win a slam dunk contest.

Spud Webb served as a judge for the contest in 2010 and is now President of Basketball Operations for the Texas Legends, a NBA Development League team. 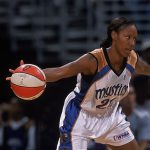