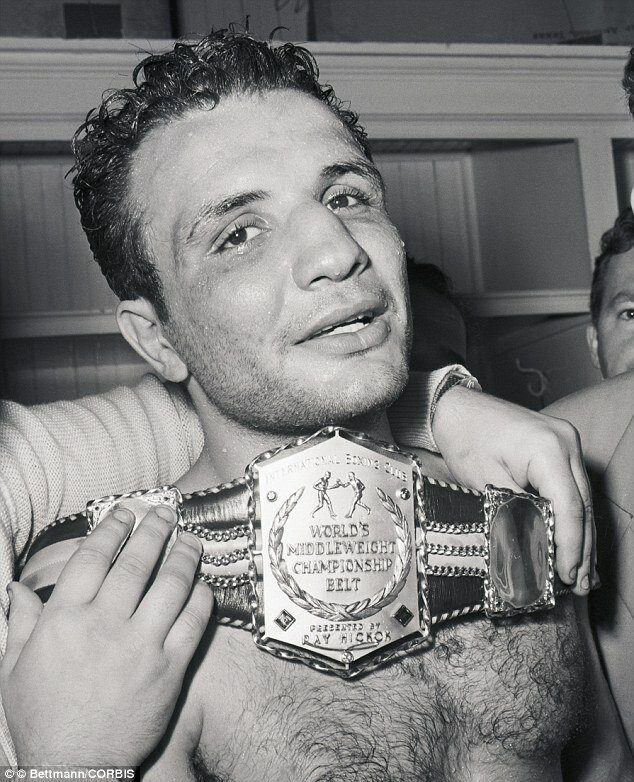 Giacobbe LaMotta was born in Brooklyn, New York on this date in 1922. He was rejected for military service during World War II because of an ear condition and became a professional boxer at the age of 19. His first fight was on March 3, 1941 in New York. 11 days later, he fought in Bridgeport. 20 days after that, he had his third fight and his fourth came the following week. In those days it was common for a boxer to fight often and LaMottta certainly did, competing in 34 bouts during his first 19 months as a fighter. He went 14-0-1 in his first 15 pro bouts until losing a controversial decision to Jimmy Reeves six and a half months into his career. Jake LaMotta stood 5’8” tall and fought mostly as a middleweight. He faced Sugar Ray Robinson, who is generally considered the greatest middleweight of all time and one of the best prizefighters ever to lace up a pair of gloves, six times. The first came in Madison Square Garden in October of 1942 and LaMotta knocked Robinson down in the first round before losing a unanimous 10 round decision. They squared off again on February 5, 1943 in Detroit and the “Bronx Bull” knocked the champ through the ropes in the 8th round in route to winning via unanimous decision and handing Robinson the first defeat of his career. The victory was short-lived, as the two fought again just 19 days later. Robinson was knocked down and took a nine count in the seventh round before winning a close fight. Two years later, they fought for a fourth time in a return to Madison Square Garden. Robinson won again by a unanimous 10 round decision. The two met for their fifth bout six months later before 14,755 people at Chicago’s Comiskey Park, an outdoor arena, and Robinson won a very controversial split decision in 12 rounds. Sugar Ray said afterward, “this is the toughest fight I have ever had with LaMotta.” The sixth and final meeting took place at Chicago Stadium on Valentine’s Day, 1951. The fight was for the middleweight title that LaMotta had owned since June of 1949 and came to be known as the “Saint Valentine’s Day Massacre”, as Robinson gave LaMotta a horrible beating before the fight was stopped in the 13th round with LaMotta lying on the ropes. Robinson took the title but never was able to knock Lamotta down. Mr. LaMotta released a memoir in 1970 entitled Raging Bull: My Story, which was the basis for Martin Scorsese’s film, Raging Bull, starring Robert De Niro as Jake LaMotta. De Niro trained with LaMotta in preparation for shooting the film and went on to win an Academy Award for Best Actor in 1980.