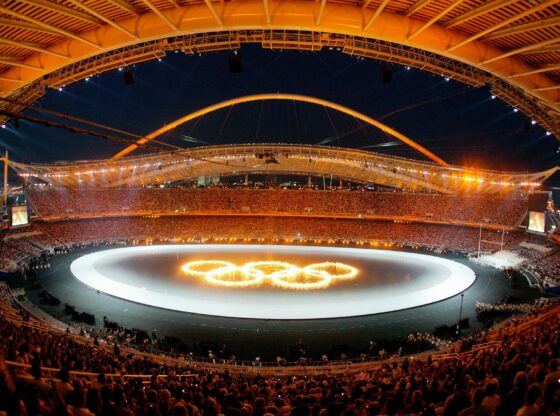 The Olympic Games are the world’s foremost sports competition.

Inspired by the ancient games held in Olympia, Greece, from the eighth century BC to the fourth century AD, the modern Games were first held in Athens in the spring of 1896. Athens is one of the oldest cities in the world, having been settled in 3,000 BC. According to Greek mythology, Athena had a competition with Poseidon over who would become the protector of the city. Poseidon produced a spring of sea water by striking the ground with his trident—symbolizing naval power, while Athena touched the sacred rock of the Acropolis with an olive tree, symbolizing peace and prosperity. The people of Athens chose the goddess of wisdom as their protector. Centuries later, Athens laid the foundation for western civilization. The original modern Games—held April 6-15–brought together 241 athletes [men only] from 14 countries that competed in 42 events. American James Connolly became the first Olympic champion, winning a gold medal in the triple jump, while Greek peasant Syridon Louis won the Games’ marquis event—the marathon.

In September 1990, the International Olympic Committee shocked the world by choosing Atlanta over Athens—the sentimental favorite–as host city for the 1996 Summer Games. With the centennial of the modern Games approaching, Athens considered itself a shoe-in as host city and submitted a poorly organized bid. The IOC, fearing stifling traffic, pollution, an unstable government, and the threat of terrorism given Athens’ proximity to the Middle East, awarded the 1996 Summer Games to Atlanta. The Greek delegation cried conspiracy over the home city of Coca-Cola—a major Olympic sponsor—being selected over the birthplace of the Games. In September 1997, after successfully hosting the World Championships of track & field one month earlier, Athens outbid Rome and was named host city for the 2004 Olympics. Needing to improve its infrastructure, Greece built a new airport and tram system, expanded its metro system, improved roads and built new, permanent athletic facilities.

The Games of the XXVIII Olympiad commenced in Athens—where it all began–August 13, 2004, with the motto “Welcome Home.” The Olympic torch, having been lit that March in ancient Olympia, traveled around the world before returning to Greece in August. The opening ceremony culminated in the lighting of the Olympic cauldron by Nikolaos Kaklamanakis, Greece’s 1996 windsurfing gold medalist. More than 10,000 athletes competed in 301 medal events across 28 sports. Over 21,500 media members converged on this ancient city of four million people. The Games included over 5,500 team officials representing 201 countries. The Games were contested in 30 different venues, including Panathinaiko Stadium, which hosted archery in 1896 and again in 2004. The shot put took place in ancient Olympia, site of the original Games and the marathon was held along the same route as it was in 1896. Michael Phelps [Daily Dose, 6/30/16] won a record eight medals, including six gold, while Gal Fridman won Israel’s first ever gold medal—in windsurfing. Argentina won the soccer tournament without giving up a goal and the U.S. women outscored their opponents, 51-1, en route to winning the softball tourney. China’s Liu Xiang won his country’s first-ever gold medal in track & field in the 110 meter hurdles while Fani Halkia of Greece came out of retirement to claim gold in the 400 meter hurdles. The U.S. women won the 4 x 200 relay, breaking a world record set by Germany in 1987, while Moroccan Hicham El Guerrouj took 1,500 and 5,000 meter gold, becoming the first runner since Paavo Nurmi [Daily Dose, 6/13/16] to complete that double.

The 2004 Summer Olympics had few controversies, yet may have triggered Greece’s economic decline. The Games put Greek taxpayers on the hook for nearly nine billion Euros–over 110 percent of the country’s gross domestic product—during a time the country was economically frail. Stadiums were built with little thought for post-Olympic use, many of which became abandoned or misused. Many facilities are still used for athletics, while most sit idle, because two consecutive governments steadfastly refused to capitalize on Greece’s Olympic legacy. “We didn’t take advantage of this dynamic we got in 2004,” said Greek weightlifting champion-turned-Socialist member of Parliament Pyros Dimas. “ We simply made the biggest mistake in our history: we switched off, locked up the stadiums, and let them fall to pieces.” Andrew Zimbalist is a U.S. economist who studies the financial impact of major sporting events. “At the end of the day, the main benefit to be had seems to be a feel-good experience that the people in the host city or country have,” explained Zimbalist, “but that’s a fleeting experience, not something that endures.”

Nearly four billion people had access to TV coverage of the 2004 Olympics, up from the 3.6 billion for Sydney in 2000. The U.S. won 36 gold medals [101 total medals] in Athens, more than any other country. China was next, with 32 golds [63 total], followed by Russia, who claimed 28 [90 total]. The host country claimed 16 total medals—six of them gold—their best tally in history.

On this date in 2004, over 70,000 patrons gathered in Spyros Louis—the Olympic Stadium in Athens–to watch the closing ceremony of the Games of the XXVIII Olympiad.