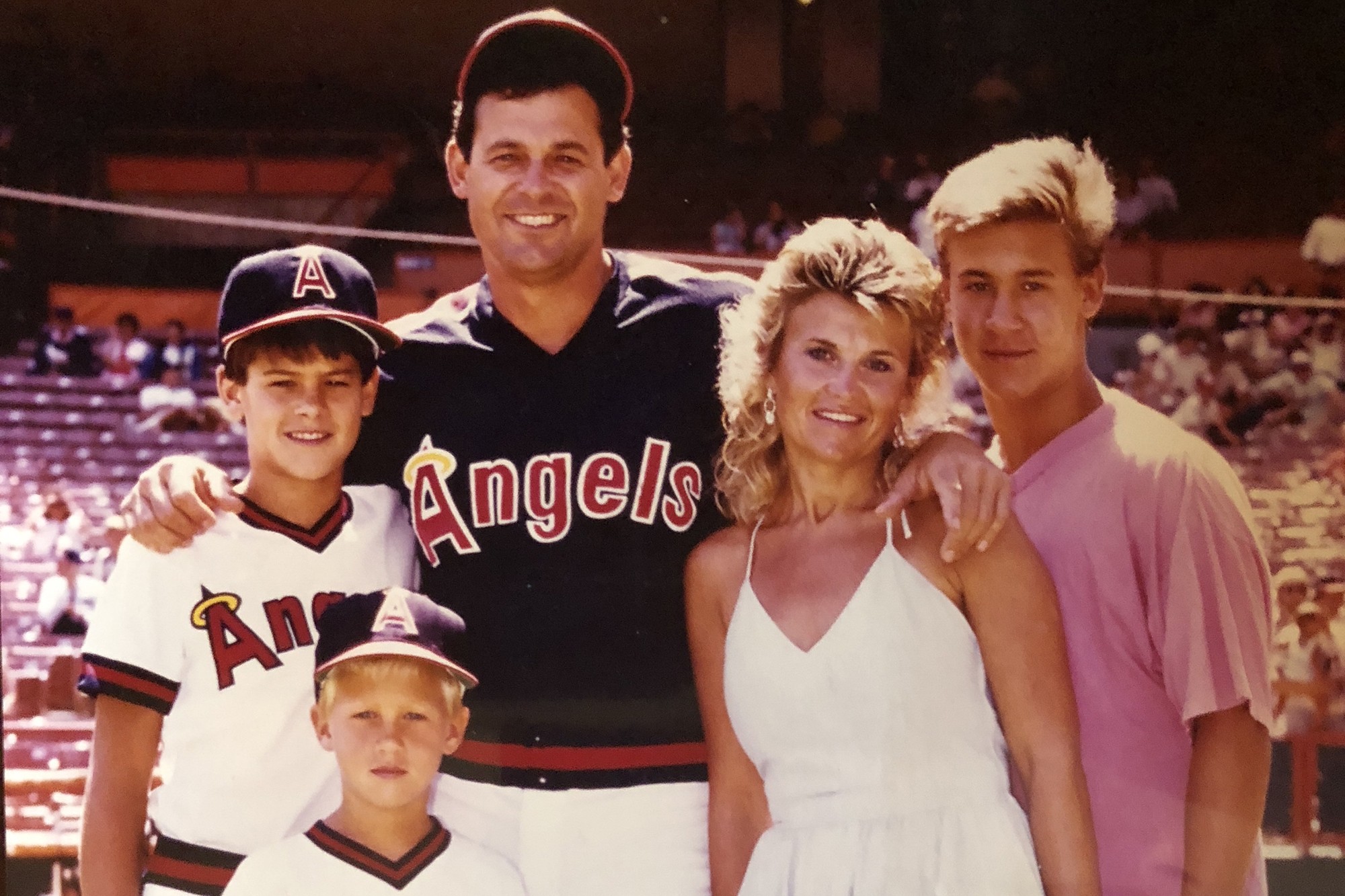 The Boone Family is the first to send three generations of players to the Major League All-Star Game.

Descendants of legendary American frontiersman Daniel Boone, the Boones have been a part of the fabric of big league baseball for seven decades.  Of the five three-generation MLB-player families [Bells, Colemans, Hairstons and Schofield/Werths], the Boones were the first, with Bret Boone breaking in with the Seattle Mariners in 1992.  Of those five families, only the Boones have had every member make an MLB All-Star team.

It all began with Ray Boone, who played 13 MLB seasons.  Born and raised in San Diego, Ray attended Herbert Hoover High School, alma mater of two legends named “Ted.”  Williams – the Splendid Splinter – graduated five years ahead of Boone and went on to become the greatest hitter that ever lived.  Ted Giannoulas – the San Diego Chicken – graduated Hoover in 1972.

Ray Boone married Patsy, his high school sweetheart, a former synchronized swimmer who appeared in movies with Esther Williams.  They had three children: sons Bob and Rod, and a daughter, Terry.

After serving in the Navy during World War II, 25-year-old Ray Boone was called up by the Cleveland Indians in September 1948.  He appeared in six games in his first season – collecting two hits in five at bats – earning a championship ring and a winner’s share as part of the Indians team that won the 1948 World Series.  It remains the last time the Tribe has won the Fall Classic.  An infielder, Boone batted .275 with 151 home runs in 1,373 career games.  The two-time All-Star hit 20 or more home runs in four straight seasons.  In 1955, he drove in 116 runs to lead the American League. Boone played for six teams in his career before retiring after the 1960 season.

Ray’s youngest son, Rod, starred at Stanford and made it as far as Triple-A before hanging up his spikes in 1975. His oldest boy, Bob, was drafted in the sixth round by the Philadelphia Phillies in 1969 and was brought to the majors in late 1972.  A superb catcher, he won seven Gold Glove Awards.  Bob Boone helped the Phillies to three straight division championships and the 1980 World Series title.  He later played for the Angels and Royals.  In September 1984, he called Mike Witt’s perfect game.  A four-time All-Star, Bob caught 2,225 games in his 19-year big league career, a record later broken by Carlton Fisk.

After his playing days were over, Bob Boone went on to manage in the major leagues.  He piloted the Kansas City Royals from 1995 to 1997, then led the Cincinnati Reds from 2001 to 2003.

In April 1969, 21-year-old Bob Boone was preparing for his first season with the Phillies Single-A affiliate in Raleigh-Durham when he and wife Susan had the first of their three sons.  Born near San Diego, Bret Boone attended El Dorado High School in Orange County, California, with Olympic swimmer Janet Evans.  A hard-hitting second-baseman, he attended USC and was selected in the fifth round of the 1990 amateur draft by the Seattle Mariners.  Bret made history when he debuted in August 1992, becoming the third generation of Boones to play in a major league game.  A three-time All-Star and four-time Gold Glove winner, Boone had six 20-homer seasons.  In 1997, he set single-season records for fewest errors [2] and highest fielding percentage [.997] by a second baseman.

Aaron Boone is the second of Bob and Susan’s three boys [the third, Matt, was drafted by the Detroit Tigers but never made it past Class A].  Aaron followed in his older brother’s footsteps to USC, then helped the Orleans Cardinals to the 1993 Cap Code Baseball League title.  Selected by Cincinnati in the third round in 1994, Aaron made his big league debut in June 1997.

On the last day of the 1998 season, the Reds made history when they started two sets of brothers in the infield.  Stephen Larkin started at first base, while brother Barry Larkin played shortstop.  Bret Boone started at second base, and Aaron Boone manned third.

Aaron Boone played for the Reds from 1997 to 2003.  In three of those seasons [2001-2003], he played for his father.  In 2002, Boone hit a career-high 26 home runs, including the last ever hit in Cincinnati’s Riverfront Stadium.  Named team MVP in 2002, Aaron also appeared in the 2003 All-Star Game opposite his brother Bret, who was named to the American League squad.

Immediately prior to the 2003 trading deadline, the underrated Aaron Boone was dealt to the New York Yankees.  The Yanks made it to the 2003 ALCS, where they faced the Boston Red Sox.  Boston had not won a World Series since 1918, when they traded Babe Ruth to the Yankees, launching the Curse of the Bambino.  In the 11th inning of Game 7 of the 2003 Championship Series, Aaron Boone hit a walk-off home run off Tim Wakefield to send New York to the World Series.  While many in Red Sox Nation considered Boone the modern-day Bucky Dent [who bestowed a similar fate upon Boston in a 1978 playoff game], others dubbed the hit the Curse of the Boonebino.

After stints in Cleveland, Florida, Washington and Houston, Aaron Boone retired following the 2009 season.  He became an analyst for ESPN, appearing on Sunday Night Baseball, Baseball Tonight and on post-season coverage.  In December 2017, Aaron Boone was named a the 33rd manager in New York Yankees history.

In June 2017, the Washington Nationals selected San Diego-area shortstop Jake Boone in the 38th round, making the Boone Family the first to produce four generations of players drafted into MLB.  Jake, one of Bret and Suzi Boone’s four children, recently completed his freshman year at Princeton, where he played infield for the Tigers.