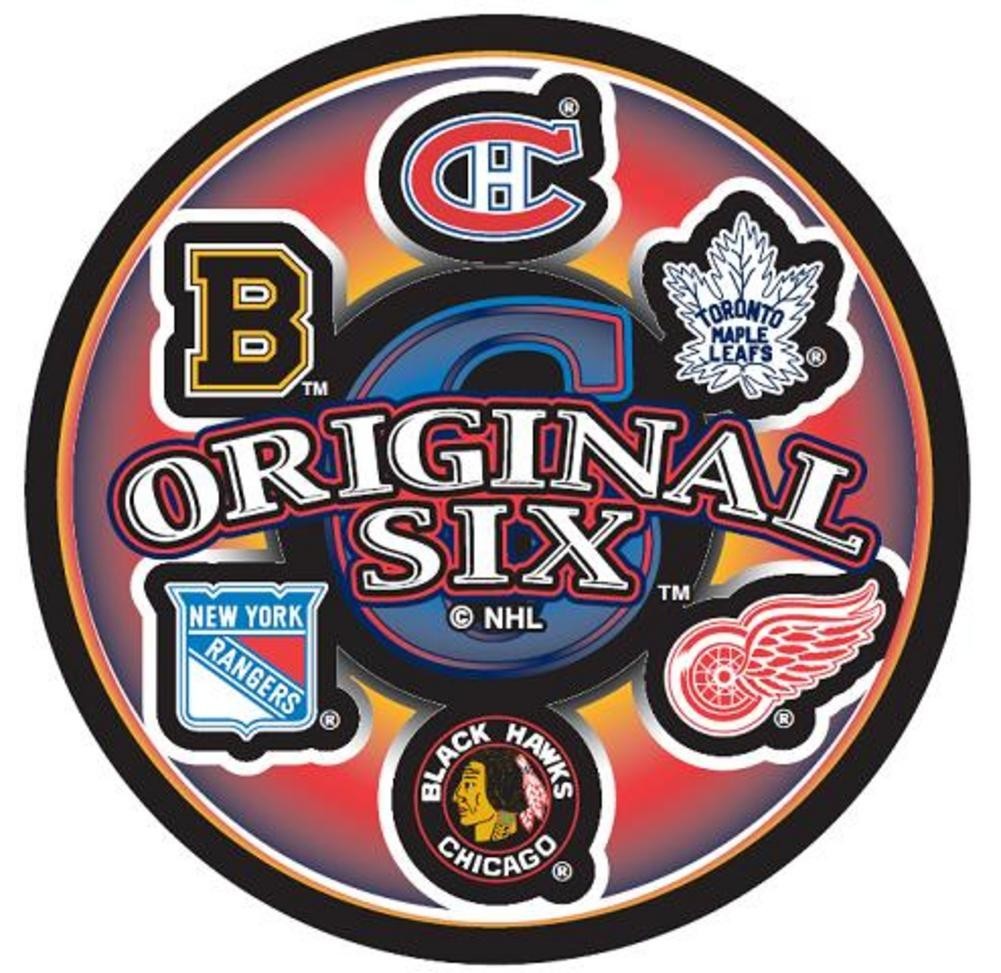 The Original Six is a term used to describe the six teams that made up the National Hockey League from 1942 through 1967.

In 1917, four owners from the National Hockey Association formed a new league due to ongoing disputes with Eddie Livingstone, owner of the Toronto Blue Shirts.  Left with only one remaining team, the NHA folded.  That November, the National Hockey League was founded, and included the Montreal Canadiens, Ottawa Senators, Quebec Bulldogs, and Montreal Wanderers.  When the financially-strapped Bulldogs could not fund a team for its first season, the NHL opted to put a team in Canada’s second-largest city and granted a franchise to the Toronto Arena Company.  When the Wanderers disbanded one month into the first season after their arena burned down, the league was left with just three franchises.  The NHL first expanded to the United States in 1924 with the founding of the Boston Bruins, and the league granted franchises to New York, Chicago and Detroit for the 1926-27 season. By the end of the decade, the NHL consisted of ten teams in Ontario, Quebec, the Great Lakes region and the Northeastern United States.

Financial hardship caused by the Great Depression reduced the NHL to eight teams by the start of the 1935-36 season.  When Canada entered World War II in September 1939, many players left for military service, severely depleting the league’s base of Canadian players.  The Senators–one of the NHL’s charter members– folded, as did the Montreal Maroons.  When the New York Americans—better known as the Amerks—suspended operations in the fall of 1942, the league was left with six franchises.  A quarter century after its formation, the NHL finally settled into the six-team league with which fans have become familiar.  Despite efforts to initiate expansion after the war, including attempted revivals of the Maroons and Amerks franchises, league owners chose to operate with six teams—later dubbed the Original Six–from 1942 to 1967.  The Montreal Canadiens and Toronto Maple Leafs represented Canada, while the Boston Bruins, New York Rangers, Chicago Blackhawks and Detroit Red Wings were the league’s U.S. franchises.

During the Original Six era, the top four teams in the regular season advanced to the playoffs, which consisted of two rounds.  The NHL gave each team exclusive rights to players within 50 miles of its home ice.  Toronto and Montreal were rich in hockey prospects and Detroit had southwestern Ontario as part of its territory, providing those three clubs with a major recruiting advantage over Boston, New York, and Chicago.  This created a league that was top-heavy with dominant teams.  Between 1949 and 1967, Montreal never missed the playoffs and Detroit and Toronto only missed three times each, leaving the other three teams to compete for the one remaining berth.  There was little player movement between clubs, and rosters were comprised almost entirely of Canadian players, resulting in dynasties.  In the 25-year Original Six era, Montreal, Toronto and Detroit won every Stanley Cup but one, when the Blackhawks beat the Red Wings in 1961.

The Montreal Canadiens are older than the NHL.  Founded in 1909 as a charter member of the NHA, the franchise is also a charter member of the NHL.  Known as Les Habitants—or the Habs—the club’s official name is le Club de hockey Canadien.  The Canadiens have won the Stanley Cup a record 24 times, roughly a quarter of all Stanley Cup championships in league history.  Only the Boston Celtics have been more successful among North America’s major professional sports franchises.  Based in the heart of French-speaking Quebec, the Canadiens organization operates in both English and French, with public address announcements and press releases being provided in both languages.  The franchise motto, “To you from failing hands we throw the torch.  Be yours to hold it high,” appears on the wall of the Canadiens’ dressing room.  The Canadiens have retired 15 numbers, the most of any team in the NHL.  All were born in Canada.  Sixty-two people associated with the Canadiens have been inducted into the Hockey Hall of Fame.  Since 1911, the team’s colors have been blue, red, and white, and the Habs sport one of hockey’s oldest and most iconic logos.

When the NHL made Toronto a charter member in 1917, the team had no nickname.  Originally operated by the Toronto Arena Company, they became known as the Arenas.  In 1919, they became the St. Patricks before Conn Smythe bought the team in the mid-1920s and changed the name to Maple Leafs.  With an estimated worth of more than $ 1.3 billion, the Leafs are the most valuable franchise in the NHL.  Toronto has won 13 Stanley Cups championships—second only to their chief rival, the Montreal Canadiens—but have not won a title since 1967, currently the longest drought in hockey.  From 1931 to 1999, the club played home games at Maple Leaf Gardens—a cathedral of hockey—and Leafs tickets are hard to come by.  Maple Leaf Gardens sold out every game from 1946 until the building closed in 1999.  Passions around the team run high in the NHL.  In 2002, Sports Illustrated named the Toronto Maple Leafs as the “Most Hated Team in Hockey.”

Boston grocery store tycoon Charles Adams fell in love with hockey while watching the 1924 Stanley Cup Finals between the Canadiens and WCHL champion Calgary Tigers [at that time, the Stanley Cup final pitted the NHL winner against the champion of various other professional hockey leagues].  He persuaded the NHL to grant him a franchise for Boston, and in November 1924 the league put its first team in the United States.  Adams named the team Bruins and chose black and gold team colors to match those of his grocery store chain.  The league’s third-oldest franchise has won six Stanley Cups, including two between 1969 and 1972, when the B’s were led by the great Bobby Orr [Daily Dose, 8/25/15] and legendary Phil Esposito [Daily Dose, 12/22/16].

The Rangers are the second franchise the NHL granted to New York City, as the Amerks had arrived in the Big Apple one year earlier, in 1925.  Tex Picard, president of Madison Square Garden [Daily Dose, 12/15/15], was awarded a franchise for the 1926-27 season, and “Tex’s Rangers” quickly eclipsed the Amerks as New York’s favorite team.  Playing only a few blocks away from Times Square, they obtained their now-famous nickname the “Broadway Blueshirts.”  The Rangers were the first U.S. franchise to win the Stanley Cup when they claimed the title in 1928, in only their second  year of existence.  The Blueshirts had won three titles by 1940, but the success would be short-lived, as New York did not win another Stanley Cup until 1994.  The Rangers have played at MSG in their nine decades in New York, and 48 people associated with the club are in the Hockey Hall of Fame.

The Chicago Blackhawks [spelled Black Hawks until 1986] have won six Stanley Cup championships in 90 years.  It took three-and-a-half decades to win the first three titles and seven years to win the next three.  Chicago coffee tycoon Frederic McLaughlin, who had been an Army commander in World War I, was granted a franchise for Chicago in 1926 and named them after his infantry unit’s Blackhawk Division.  Chicago won Stanley Cup titles in 1934, 1938, and 1961 before Bill Wirtz took ownership of the team.  In 2002, ESPN ranked Wirtz as the third greediest owner in sports and, in 2004, named the Chicago Blackhawks as the worst franchise in sports.  Following Bill Wirtz’ death in 2007, his son Rocky assumed control of the team, and Chicago is now a model franchise.  The team logo is arguably the best in all of sports and the Hawks’ boast the two greatest sweaters [red at home, white on the road] in the NHL.  The Blackhawks home venue—the United Center–is the loudest in hockey and has reached 122 decibels when tenor Jim Cornelison sings the National Anthem [Daily Dose, 10/14/16] before home games.

Detroit joined the NHL in 1926.  Originally called the Cougars, they skated as the Falcons for two seasons before becoming the Red Wings in 1932.  Between 1934 and 1966, the Red Wings missed the playoffs only four times.  In the 25 years thereafter—a period in which they were dubbed the “Deadwings”– Detroit only made the postseason eight times.  The Wings have won 11 Stanley Cup titles, including four between 1997 and 2008.  Detroit is “Hockeytown,” and the team plays home games at Joe Louis Arena—better known as “The Joe.”  Red Wings fans are rabid, often throwing octopi onto the ice during playoff games for good luck.  The tradition started in 1952, when local fish market owner Peter Cusimano threw an octopus onto the ice, with the cephalopod’s eight legs symbolizing the number of wins needed to win the Stanley Cup.  Some of the greatest players in NHL history have worn the “winged wheel’ on their sweater, including Gordie Howe, Steve Yzerman [Daily Dose, 10/22/15], Terry Sawchuk, and Nicklas Lidstrom [Daily Dose, 11/23/16].  The Red Wings have made the playoffs in 29 of the last 31 seasons.  Their current run of 25 in a row is the longest current streak of postseason appearances in all of North American professional sports.

The NHL’s Original Six operated for a quarter century and remain, to hockey purists, the core of the league and most historic part of its culture.  The name Original Six took hold after the NHL expanded in 1967, when it added six new teams and doubled in size.  Original Six started to appear in the press to differentiate the six existing from the six new expansion teams.  By 1974, there were 18 teams in the NHL.  The league currently features 30 clubs: 23 in the United States and seven in Canada.

Ninety years ago this week, Conn Smythe bought the Toronto St. Patricks and renamed them the Maple Leafs.