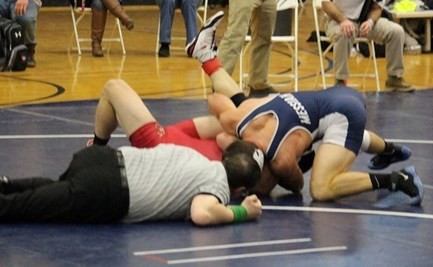 Each spring, wrestlers from 76 Division I schools compete for NCAA individual and team wrestling titles.

First held in 1928, March Matness is college wrestling’s marquee event.  Long held on college campuses, the tournament’s explosion in popularity has forced it to move to major cities, where it is contested at professional sports arenas.  The 2018 championships were held at Quicken Loans Arena, home of the NBA’s Cleveland Cavaliers.  In the past decade, the event has been held at Madison Square Garden, as well as the home arenas of the Oklahoma City Thunder, St. Louis Blues, and Philadelphia Flyers and 76ers.

March Matness is a double-elimination tournament contested in ten weight classes.  Thirty-three wrestlers in each weight class qualify through eight conference championship tournaments.  During the championships, individual match winners earn points based on the level and quality of the victory, which are totaled to determine the team title.

In addition to deciding the national championship, the NCAA tourney also determines the Division I All-American team.  The top eight finishers in each weight class qualify for All-America status.  The top four teams earn podium finishes.  The immensely-popular event is broadcast by ESPN, airing on ESPN2, ESPNU and live streaming [all mats for all rounds].

Since the inaugural tournament in 1928, the championships have been held every year but 1943-1945, when the matches were interrupted by World War II.  Prior to 1963, only a single championship was held for all members of the NCAA.  Division II competition began in 1963, with Division III following in 1974.

The first-ever collegiate wrestling championships were held at Iowa State.  Oklahoma A&M [which became Oklahoma State in 1957] defeated the host Cyclones as well as Michigan to win the first of 11 titles under legendary coach Ed Gallagher.  After Gallagher died of Parkinson’s disease in 1940, the Oklahoma State program was taken over by Art Griffith, who led the Cowboys to eight national titles in the next 13 seasons.  Oklahoma State has won 34 NCAA wrestling championships, more than any school in history.  From 1928 to 1949, OSU won 18 of the first 21 national crowns.

While Oklahoma State holds the most team titles with 34, no school has dominated the mat like Iowa.  Under Dan Gable – the most important figure in wrestling history – the Hawkeyes won a record nine straight national championships, and 11 of 12 between 1975 and 1986.  After four seasons without an NCAA championship banner, Iowa returned to dominance, winning nine of ten titles from 1991 to 2000.

In all, Iowa has collected 23 NCAA wrestling championships, second-most of all time.  Iowa State and Penn State have won eight championships, and Oklahoma seven.  Only six other schools have claimed the national trophy, none more than three times.  Of the 88 NCAA team championships awarded in wrestling, only 16 titles have gone to schools outside the states of Oklahoma and Iowa.

The closest March Matness finish came in March 1978, at the 48th NCAA Championships.  Before 43,759 spectators at the University of Maryland’s Cole Fieldhouse, Gable’s Iowa Hawkeyes edged archrival Iowa State by a half-point, 94.5 to 94.  Iowa claimed the third NCAA wrestling title in school history despite having no individual champions.  Two team crowns have been decided by one point.  In 1946, Oklahoma State got past Iowa State, 25-24.  Four years later, Oklahoma nudged Oklahoma State, 24-23.

Iowa, Oklahoma State and Penn State are the only programs in NCAA Division I history to crown five individual champions in one year.  The Hawkeyes did it twice – in 1986 and 1997.  Oklahoma State boasted five winners at the 2005 championships, while Penn State equaled the feat in 2017.

Four grapplers have won Division I individual titles in each of their four years of eligibility.  Oklahoma State’s Pat Smith was the first, in 1994.  Kyle Drake of Cornell was next [2010-13], followed by Ohio State’s Logan Stieber [2012-12].  Perhaps the greatest of all is Cael Sanderson.  From 1999 to 2001, Sanderson had a cradle hold on the 184-pound weight class, winning three straight.  As a senior, the Iowa State Cyclone moved up to 197 pounds to capture his fourth title.  Sanderson is also the only athlete in Division I history to be named Most Outstanding Wrester of the NCAA tourney four straight years.

Like the unrelenting Dan Gable, Cael Sanderson parlayed his success on the mat to build a collegiate powerhouse.  Prior to Sanderson taking over the Penn State program in 2009, the Nittany Lions had won one national championship – in 1953.  PSU had finished seventh in the [then] 11-team Big Ten conference.  Instilling the same discipline and work ethic that saw him go 159-0 as a collegiate wrestler, Sanderson led the Nittany Lions to the NCAA title in 2011.  Penn State has won seven of the last eight team championships, including the 2018 tournament.