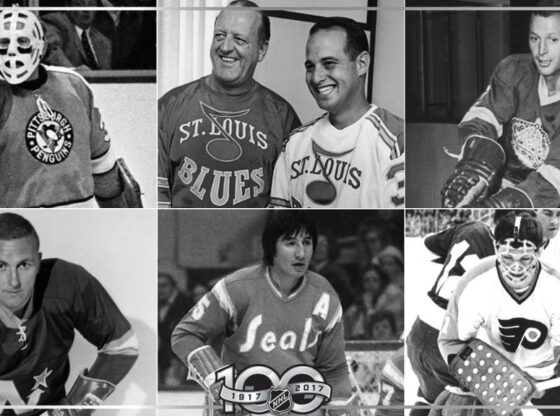 In 1967, the National Hockey League underwent the most dramatic expansion in the history of professional sports, doubling in size.

The NHL operated as a stable, six-team league for a quarter century.  Since the financial toll caused by the Great Depression and World War II had reduced the league to a half-dozen teams for the 1942-43 season, the NHL remained static.  These franchises – the Original Six — remained constant for 25 years.  The move to expand came in the league’s 50th season.

Professional sports was experiencing unprecedented growth and popularity in the early 1960s.  The Giants and Dodgers had left New York for the West Coast in 1958, and Major League Baseball had 20 teams by 1962 [MLB would grow to 24 by the end of the decade].  The NBA had nine clubs, with plans to add five more. The biggest spurt came in pro football.  The NFL had 14 franchises, with more on the way, while the upstart AFL fielded eight teams in its inaugural 1960 season.  All but the National Hockey League had a presence in California.

With two franchises each in eastern Canada and the Upper Midwest and East Coast of the United States, the NHL operated as more of a regional league than a national one.  By 1960, its television contracts had expired, and the league was told that it would not receive a U.S. television contract without expansion.  Eager to reach the West Coast market, the networks considered televising games from the Western Hockey League, a minor league that had franchises in several western cities.

Ownership changes in NHL franchises in Toronto, Montreal and New York brought about a younger guard.  As more conservative owners retired, the NHL’s Board of Governors [franchise owners] became more receptive to new ideas.  Fearing competition from the WHL and desiring a lucrative TV contract, the NHL deemed expansion “necessary and inevitable,” and, in 1963, began discussions on growing the league.

In February 1965, 13 ownership groups representing eight cities arrived in New York to present their cases to the Board of Governors.  Five groups were from Los Angeles, two represented Pittsburgh, and one each were from Minneapolis, Philadelphia, San Francisco-Oakland, Baltimore, Buffalo, and Vancouver – which was considered a lock for a team.  Criteria for admission included a $ 2 million franchise fee and an arena that would seat at least 12,500.

Following a year of deliberation, the NHL announced at its Board of Governors meeting in February 1966 that franchises had been granted to Los Angeles, St. Louis, Philadelphia, Pittsburgh, Minnesota, and the San Francisco Bay Area.  Vancouver lost its chance for a franchise after turning down a bid from the owners of the Toronto Maple Leafs.  Buffalo was on track to get a team before Pittsburgh Steelers’ owner Art Rooney persuaded the Norris brothers, owners of the Chicago Black Hawks and Detroit Red Wings whom Rooney knew through his interests in horse racing, to grant a franchise to Pittsburgh.

In an era when players didn’t wear helmets and many goalies went mask-less, the NHL added six teams – the Next Six – and doubled in size.  The “Great Expansion of 1967” was the granddaddy of all expansions.  The landmark growth was the first of its kind in any professional sports league.  For the first time in NHL history, hockey would be played west of Chicago.  The expansion was balanced geographically: two teams were placed in California, two in the Heartland, and two in the East.

The six new franchises were placed in the newly-created West Division, playing an interlocking schedule with limited games against the Original Six.  The regular season schedule was expanded from 70 to 74 games.  The winner of the West Division would meet the champion from the East Division – comprised of the six existing clubs — for the Stanley Cup.

On June 6, 1967, the NHL held its inaugural expansion draft in Montreal.  Each expansion team drafted 20 players: two goaltenders and 18 skaters.  Existing clubs were allowed to protect one goaltender and 11 skaters, with a total of 120 players being drafted to fill the rosters of the Next Six.  Each of the new teams’ names was written on a slip of paper, which NHL President Clarence Campbell drew from the bowl of the Stanley Cup.  The L.A. Kings went first, choosing future Hall of Fame goaltender Terry Sawchuk, who had led Toronto to a Stanley Cup championship the prior season [it remains the last Cup title in Maple Leafs history].  The St. Louis Blues picked last, selecting right-winger Max Mestinsek from the Rangers.  Two months later, Mestinsek nearly lost his arm in an auto accident and never skated in the NHL.

The most unstable franchise was In Oakland.  Less than two months into their first season, they considered relocating to Vancouver.  Needing a presence in California, the NHL quickly shot down the move.  They then changed their name from California Seals to Oakland Seals.  After outbidding roller derby boss Jerry Seltzer for the team in 1970, Oakland A’s owner Charlie Finley took control in 1970.  Finley renamed the team the Bay Area Seals, but two games into the ’70 season he changed it to the California Golden Seals.  Seeking to emulate the iconic uniform of the A’s – complete with white cleats — the flamboyant Finley had his team take the ice in white skates, making them look more like figure skaters than hockey players.  After 11 losing seasons in Oakland, the Seals moved to Cleveland and became the Barons, making them the first NHL franchise to relocate since 1935.

Of the Next Six, four still play in their original cities.  The Seals became even more woeful in Cleveland, where after two disastrous seasons, they merged with another failing team, the Minnesota North Stars.  In 1993, the North Stars relocated to Dallas to become the Stars.  The St. Louis Blues represented the West Division in the first three Stanley Cup Finals following expansion, where they were swept in each.  The Philadelphia Flyers became the first of the Next Six to break through and win a Stanley Cup title when, in 1974, the “Broad Street Bullies” won the first of back-to-back championships.

It took half a century, but the Great Expansion of 1967 changed the NHL forever.  What was once a clubby, regional league became national.  In the five decades since its first expansion, the NHL has grown to 31 teams.  No longer popular only in traditional hockey hotbeds of the North, the league has migrated to Phoenix, Las Vegas and Nashville.  There are now three NHL teams in California, while two reside in Florida.  The birthplace of hockey has prospered as well, as Canada currently boasts seven NHL franchises.

The 12-team NHL debuted on this date in 1967.  There were ten games on the slate, with two involving Original Six teams and two comprised of expansion clubs.  Entering their 51st seasons, Detroit and Boston tied, 4-4, while the New York Rangers downed Chicago, 6-3  Taking the ice for the first time were the Philadelphia Flyers, who traveled to Oakland and lost to the Seals.  Two other newcomers, the St. Louis Blues and Minnesota North Stars, skated to a 2-2 tie.  The Kings and Leafs had the night off, while a capacity crowd at the Civic Arena in Pittsburgh saw the great Jean Beliveau score his 400th career goal in a 2-1 Canadians victory over the Penguins.

Rube Waddell
Jim Murray – Best Sportswriter There Ever Was