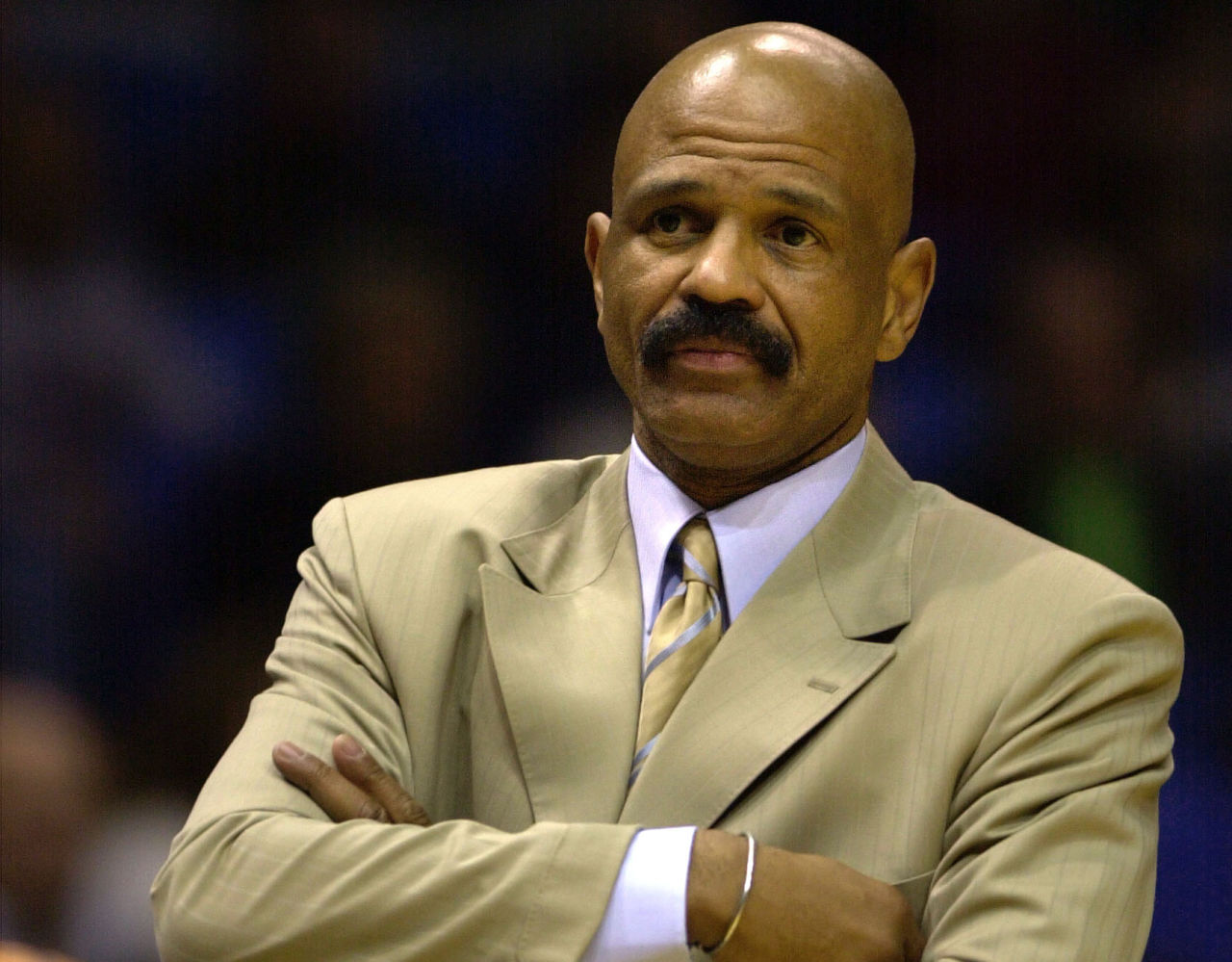 John Lucas couldn’t stop using drugs when he was in the NBA.  Now he counsels others on how to stay clean.

An All-American in both basketball and tennis at Maryland, Lucas was the first overall selection of the 1976 NBA draft by the Houston Rockets.  The first point guard ever taken with the top pick, he played in the NBA for 14 years and six teams.  Addicted to drugs and alcohol, Lucas was repeatedly suspended by the NBA between 1982 and 1986 for substance abuse, and twice lost his job because of it.

Lucas’ battle with cocaine and alcohol nearly destroyed him, becoming public after his repeated suspensions.  “I wouldn’t recommend anybody go through what I’ve gone through, because only one out of ten of us make it back,” said Lucas, who has been sober for over three decades.  “I’ve seen the devil and it ain’t pretty.”

Born on Halloween in 1953, John Harding Lucas grew up in Durham, North Carolina.  He attended Hillside High School, alma mater of Biff Henderson, who later achieved fame on Late Show with David Letterman.  The Lucas household was a strict one.  Both of his parents were school principals – his mother at the local junior high and John Sr. at Hillside.

A perfectionist who is extremely hard on himself, Luke was First Team All-ACC three times at Maryland.  A consensus All-American point guard in both 1975 and ’76, Lucas also won tennis singles titles his sophomore and senior years en route to being named 1976 ACC Athlete of the Year.  At 6’3”, 175, the left-handed Lucas was a deft ball handler who could penetrate, dish, and shoot from the outside.  A fiery floor general, he led Team USA to a gold medal at the 1975 Pan Am Games.

After averaging 11.1 points and 5.6 assists in his first NBA season, Lucas was named to the 1977 All-Rookie Team.  In his first two off-seasons, he also played professionally in the World TeamTennis [WTT] league.  The immensely-talented Lucas, who took his first drink at 14 and once took LSD the night before a game while at Maryland, quickly began to spiral out of control.  He missed practices and games, and cheated on drug tests by substituting teammates’ urine for his own.  Lucas bounced from team to team and was waived twice.  The Washington Bullets hired two bodyguards to keep an eye on Lucas, yet he was still wily enough to give them the slip.

Early in the morning of March 13, 1986, Lucas awoke from a blackout in one of downtown Houston’s seedier neighborhoods.  Wearing five pairs of socks, no shoes and a suit soaked in urine, he couldn’t find his car.  Lucas was late for practice and was later released from the team after testing positive for cocaine.  While the Rockets were headed to the NBA Finals, Lucas’ life was pointed in a different direction.  It was rock bottom for Lucas.  He checked himself into a treatment center and sobered up.  The following year, he returned to the court with the Milwaukee Bucks and averaged a career-high 17.5 points.

John Lucas began and ended his NBA career with the Houston Rockets.  In between, he had stints with Golden State, Washington, San Antonio, Milwaukee and Seattle.  In 1990, the 36-year-old Lucas retired as a player and founded a network of drug treatment programs aimed at athletes.  He bought the Miami Tropics of the United States Basketball League and filled the roster with players who had been banished by the NBA for substance abuse and were trying to make it back into the league.  Tropics players attended daily therapy sessions, were drug-tested three times a week, and earned $1,200 per month.

With bachelor’s and master’s degrees in Education, Lucas has made recovery his life’s work.  “I want to be there for others,” said Lucas.  “I was always an assist guy in basketball, but now I give people assists in life.”

After his playing days were over, Lucas went into coaching.  He led the San Antonio Spurs, Philadelphia 76ers and Cleveland Cavaliers, each for less than two seasons, and was an assistant with the Denver Nuggets and Los Angeles Clippers.  Since 2016, Lucas has served as a player development coach for the Rockets.  He lives in Houston, where he continues to run John Lucas Enterprises.

Lucas, 65, has treated former NBA players George Gervin and Michael Ray Richardson, and has helped former Washington Redskins All-Pro Dexter Manley get sober.  Lucas helped turn around the life of Tyrann Mathieu after the Honey Badger was dismissed from the LSU football team for repeated marijuana use.

But Lucas hasn’t been able to save them all.  He lost Chris Washburn, the third player picked in the 1986 NBA draft who was banned from the league for life after three failed drug tests.  After completing a treatment program under Lucas, Washburn was sent to prison for possession of cocaine and later became homeless, living in abandoned buildings and eating out of garbage containers.  Lucas tried to help Roy Tarpley, who was banned from the NBA in 1991 before landing with the Tropics one year later.  The 1988 NBA Sixth Man of the Year, Tarpley died of liver failure at 50.

John Lucas is thankful for the many gifts he has been given but the one he is most thankful for is the gift of desperation.  Like Washburn and Tarpley, no one knows how good he could have been.  By the time he got sober, Lucas was 33 and his body was ravaged by years of drug and alcohol abuse.  “What I thought was the worst possible deal in life turned out to be the best gift I’ve been given,” said Lucas, who once handed out 23 assists for the San Antonio Spurs in 1984.  “My addiction carried me past my sports life.  It gave me my best trophy.  It gave me John Lucas.  It gave me life.”

On this date in 1976, rookie John Lucas scored 17 points for the Houston Rockets in a 99-90 loss to the New Orleans Jazz in the Louisiana Superdome.  Jazz guard Pete Maravich led all scorers with 43 points.