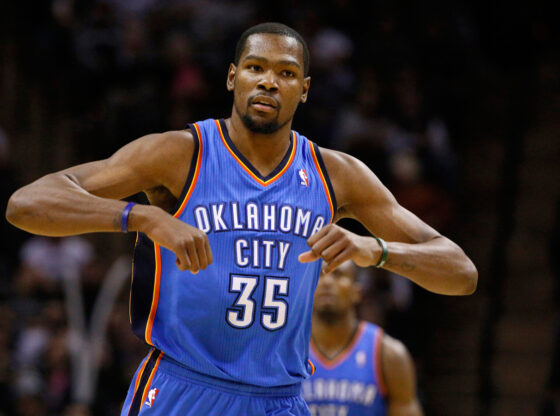 Kevin Wayne Durant is the first freshman in college basketball history to be named Naismith College Player of the Year.

Born in Washington, D.C. on this date in 1988, he is one of four children and was raised by his mother and grandmother, whom he told after scoring 18 points in the second half of an AAU national championship game at age 11 that he wanted to play in the NBA. He spent most of his time playing at Seat Pleasant Recreation Center, where he met coach Taras “Stink” Brown. Coach Brown forbade young Kevin from playing in pickup games so as to avoid developing bad habits. Instead, he worked on drills, memorized inspirational quotes, read basketball books and wrote out the “six steps to a jump shot” 500 times. He enrolled at National Christian Academy in Fort Washington, Maryland with future NBA player Michael Beasley and played two years there. He transferred to basketball powerhouse Oak Hill Academy in Virginia prior to his junior season and moved to Montrose Christian School in Rockville, Maryland for his senior year, where he was named area Player of the Year by the Washington Post. Durant was selected to play in the 2006 McDonald’s All American team as well as the Jordan All-American Classic and was named co-MVP of both games. He was considered the No. 2 recruit in the nation, behind 7-1 center Greg Oden from Indianapolis, and was heavily recruited by colleges all over the nation, most notably UConn and North Carolina. He chose the University of Texas in hopes of leading the Longhorns to a national title.

The 6’9” forward came into his first summer session at UT weighing 206 pounds and, under the direction of strength and conditioning coach Todd Wright, grew to 227 pounds by the time classes began in the fall of his freshman year. That strength, combined with a complete game and a 7’5” wingspan, made him one of the greatest first-year players in the history of college basketball. “KD” averaged 25.8 points, 11.1 rebounds and 1.3 assists per game to lead the Longhorns to a 25-10 record and fourth seed in the NCAA Tournament, where they were upset in the second round by USC despite Durant’s 30 point performance. He was named National Freshman of the Year, Big 12 Player of the Year, was a first team All-American and won the John Wooden Award, the first freshman ever to earn that honor. In April of 2007, Kevin Durant officially declared for the NBA draft.

Greg Oden was selected with the first pick of the 2007 NBA Draft and Kevin Durant was second, going to the Seattle Supersonics. He made his professional debut on October 31 with an 18 point, 5 rebound performance and made his first game-winning shot two weeks later in a win over the Atlanta Hawks. He was named 2007-08 Rookie of the Year and joined Carmelo Anthony and LeBron James as the only teenagers to average at least 20 points per game for an NBA season. The Sonics moved to Oklahoma City following the season and became the Thunder. In his second season, Durant played in the Rookie Challenge game on NBA All Star Weekend and set a scoring record with 46 points. The next season, he made his first All-Star team, led the Thunder to the playoffs and became the youngest-ever NBA scoring champion. He led the league in scoring again in 2010-11 and led the Thunder to the Western Conference Finals before losing to Dallas in five games. In 2011-12, he was named MVP of the All-Star game and won his third straight scoring title and led OKC to the NBA Finals, where they lost to the Miami Heat despite Durant leading all players with 30.6 points per game and a 54.8 percent shooting rate. He enjoyed his best season in 2013-14, scoring 30 or more points in 12 straight games and a career-high 54 points against Golden State in route to being named as the league’s MVP but came up short in the Conference Finals, losing to the eventual champion San Antonio Spurs.

Kevin Durant was a member of the gold medal-winning U.S. team at the 2010 FIBA World Championships and set the record for total points scored in an Olympic basketball tournament at the 2012 Summer Games in London as part of Team USA, winners of the gold medal in that competition. He was voted USA Basketball Male Athlete of the Year in 2010, is a four-time NBA scoring champion and six-time NBA All-Star. He is one of six members in the 50-40-90 Club, players who have a shooting percentage of 50% or better for field goals, 40% for three-pointers and 90% for free throws. Kevin Durant begins his ninth NBA season this fall.