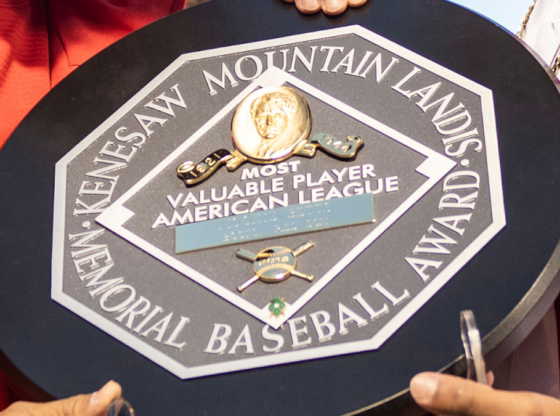 Major League Baseball will hand out its most valuable player awards next week.

The Most Valuable Player Award [MVP] is given annually to the outstanding player in each of the American and National Leagues.  Since 1931, it has been awarded by the Baseball Writers’ Association of America [BBWAA].  The winners receive the Kenesaw Mountain Landis Memorial Baseball Award, which became the official name of the award in 1944.  It was named in honor of baseball’s first commissioner, who served from 1920 until his death in 1944.

From 1911 to 1914, the Chalmers Award was presented to “the most important and useful player to the club and to the league.”  Sponsored by Chalmers Automobile, the award was discontinued after 1914 because it was not helping the company sell cars.  In 1922, the American League created a new award to honor “the baseball player who is of the greatest all-around service to his club.”

Babe Ruth was named AL MVP in 1923.  Because the league stipulated that prior award winners were ineligible, Ruth was not crowned MVP in 1927, a year in which the mighty slugger recorded one of the greatest single seasons in baseball history.  In 1927, the Bambino clouted an MLB-record 60 home runs, drove in 165 runs, and batted .356.  Despite leading the league in homers, runs, walks, on-base-percentage, slugging and both OPS and OPS+, Ruth was not named MVP.  The National League, which started MVP voting in 1924, did not have such restrictions.

MVP honors go to the player in each league who had the best regular season.  Voting takes place before the postseason but results are not announced until after the World Series.  The BBWAA began by polling three writers in each league city in 1938, then reduced that number to its current two per league city in 1961.  The BBWAA does not define what most valuable means, instead leaving the judgment to voters.  The MVP is determined by a points system.  Voters are asked to rank the top three players in each league, with five points for first, three for second, and one point for third place.  The player earning the most points is the winner.

Through the 2017 season, outfielders have won the most MVP Awards, with 63.  First basemen have earned the most among infielders, with 34.  Second basemen have garnered 16 MVPs, while third basemen and shortstops have won 15 each.  Ten catchers have been named MVP, some multiple times.  Yogi Berra and Roy Campanella won three each, while Johnny Bench earned two.

Barry Bonds* is the most decorated MVP in history, having won the award seven times.  Between 2001 and 2004, the slugging outfielder was named MVP in a record four consecutive seasons.  The great Jimmie Foxx was the first to win multiple MVPs, earning the honor in both 1932 and 1933.  Nine big leaguers have been named MVP three times, while 19 have won it twice.  Frank Robinson holds the distinction of being the only player to win the award in both leagues [1961 NL, 1966 AL].

Four players – Hank Greenberg, Alex Rodriguez, Stan Musial and Robin Yount have won MVPs at different positions.  Rodriguez is the only player to be named MVP with two different teams [Rangers and Yankees] at two different positions [shortstop and third base].  In the 87-year history of the MVP Award, 18 players have won unanimously.  The AL’s most recent was Mike Trout in 2014; the latest unanimous winner from the Senior Circuit was Bryce Harper, in 2015.  The only tie occurred in 1979, when Keith Hernandez and Willie Stargell earned an equal number of points from the voters.

Twenty-five pitchers have been named MVP: 15 right-handers and ten lefties.  Three – Walter Johnson, Carl Hubbell, and Hal Newhouser – are the only hurlers to have won multiple times [Newhouser won the award back-to-back in 1944 and 1945 with the Detroit Tigers].  Three relief pitchers have nabbed MVP honors: Jon Konstanty [1950], Rollie Fingers [1981] and Dennis Eckersley [1992].  Pitchers have fallen out of favor in recent decades.  Justin Verlander [2011] was the last AL winner, becoming the first pitcher from either league to be named MVP since Eckersley.  After Bob Gibson won in 1968, no NL pitcher garnered MVP honors until Clayton Kershaw in 2014.

MVP voting is not without controversy.  In 1941, Joe DiMaggio hit in 56 consecutive games.  Ted Williams had one of the most productive offensive seasons in history, winning the Triple Crown while batting .406.  DiMaggio was the darling of the New York media, while Williams was never popular with the press.  In the tightest race in history, the Yankee Clipper edged Teddy Ballgame by one point.  One writer left Williams off his ballot entirely, costing the Splendid Splinter his second straight MVP Award.

Two of the closest MVP races in history came in consecutive seasons and involved the same pair of Yankees – Mickey Mantle and Roger Maris.  Despite belting 40 homers in ’60 and 54 in ’61, Mantle finished second to Maris both times, losing by three and four points, respectively.

While the BBWAA does not mandate to voters what constitutes “most valuable,” the MVP has historically been awarded to players from winning teams.  The MVP has played for a first-place team 68 percent of the time.  Six have played on losing teams, including Ernie Banks in both 1958 and 1959.  While Trout has twice won the award with the lowly Angels of Anaheim, Cal Ripken was named 1991 AL MVP while toiling for the Baltimore Orioles, whose 67-95 record landed them in sixth place in the AL East.  The importance of playing on a winning team is dwindling to MVP voters.  Since 1990, only four AL MVPs played for pennant winners, while the NL has had five.

The New York Yankees, whose 27 World Series titles are the most of all time, also have the most MVPs, with 22.  The St. Louis Cardinals are next, with 17.  Three teams have never had a winner: the New York Mets, Tampa Bay Rays, and Arizona Diamondbacks [although Arizona’s Paul Goldschmidt has a trio of top-3 finishes].  In the ten seasons between 1954 and 1963, a Yankee won the MVP Award in eight of them.  Yogi Berra, Mantle, and Maris won two each, while Elston Howard earned the honor in 1963.

Not surprisingly, 61 former most valuable players are in the Baseball Hall of Fame.  Joe Torre, who was named NL MVP in 1971, did not make it as a player, but was enshrined into Cooperstown in 2014 as a manager.

The 2018 NL and AL Most Valuable Player Awards will be announced live next Thursday, November 15.  Coverage begins at 6 p.m. ET on MLB Network.