The National Baseball Hall of Fame and Museum 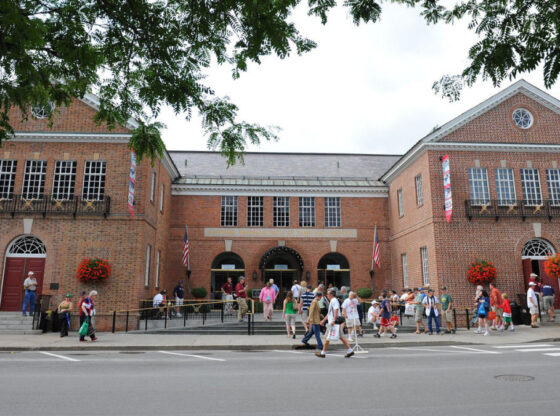 The National Baseball Hall of Fame and Museum is perhaps the most well-known sports shrine in the world.

The Hall of Fame is the keeper of the game.  Its aim is to celebrate the legendary players, managers, umpires and executives who have made baseball a fan favorite for more than a century.  Operated by private interests, the museum  — whose motto is Preserving History. Honoring Excellence.  Connecting Generations — draws approximately 300,000 visitors each year, and more than 3,000 daily during summer, the venue’s busiest season.

The Hall is located in Cooperstown, a one-stoplight town nestled between the Adirondacks and Catskills in central New York.  Now a metonym for the Baseball Hall of Fame, it drew its name from the family of novelist James Fenimore Cooper, whose father, William, founded the village.  A slice of pure Americana, Cooperstown was alleged to have been the site of the first baseball game ever played.  According to the Mills Commission, a committee formed by major league baseball in 1905 to determine the origin of baseball, the sport was invented by Abner Doubleday, a Union general during the Civil War.  Although later debunked as a myth, Doubleday created the game in Elihu Phinney’s cow pasture, in 1839.

A non-profit committed to preserving the history of America’s pastime, the Hall honors the past and present while connecting generations.  Myles Farley coached the Downers Grove [IL] Longshots, a travel team of 12-year-olds, during a youth baseball tournament in Cooperstown in 2009.  His son, Myles Jr., was on the squad, and father and son visited the Hall of Fame together while in town.  “For a baseball fan, it’s like Christmas morning,” said the elder Farley, who made two separate three-hour visits to the museum during his stay.  “From Wagner to the Willie’s [Mays, Stargell, McCovey], from Gehrig to Griffey, and from Klem to Catfish, it’s simply incredible.”

Made up of five buildings sewn together at 25 Main Street, the complex is comprised of the museum, where notable baseball memorabilia is on display, the actual Hall of Fame, where plaques of inductees adorn the walls, and a library.  The library contains more than 250,000 baseball photographs and images, as well as more than three million documents on the history of baseball.  One is the “Green Light Letter,” sent by President Franklin D. Roosevelt to baseball commissioner KenesawMountain Landis in January 1942, urging Landis to keep baseball going during World War II.

The idea for the Hall was hatched in the mid-1930s by Stephen Carlton Clark, a Cooperstown hotel owner.  After the original ball used by Doubleday was discovered in a farmhouse near Cooperstown in 1935, Clark purchased it for five dollars.  He created a one-room display of baseball objects, including the “Doubleday baseball,” in a local Cooperstown club that attracted wide attention.

Seeking to bring tourists to a city hurt by the Great Depression and Prohibition [which devasted the local hops industry], Clark asked National League president Ford C. Frick is he would support the establishment of a baseball hall of fame.  The idea was welcomed and, in 1936, the inaugural Hall of Fame class of Ty Cobb, Walter Johnson, Christy Mathewson, Babe Ruth and Honus Wagner was elected.

Within three years, 25 players had been elected to the Hall of Fame.  On June 12, 1939, the eleven living inductees traveled to Cooperstown to celebrate baseball’s centennial with the first Hall of Fame induction ceremony.  “The world will little note nor long remember what Doubleday did at Gettysburg, but it can never forget what he did at Cooperstown,” wrote Time magazine to mark the occasion.

Baseball’s most important museum tells stories through exhibits.  The Hall contains more than 40,000 three-dimensional artifacts – such as bats, balls, gloves, and uniforms.  The first item donated was the Doubleday baseball.  In 1937, Cy Young donated the ball from his 500th career win along with the 1911 uniform he wore with the Boston Braves.  The museum receives approximately 400 new artifacts each year.  They are housed in climate-controlled rooms and the museum promises – in exchange for the donation of an artifact – to care for the item in perpetuity.

Election to the Hall of Fame is by vote of the Baseball Writers Association of America [BBWAA], comprised entirely of newspaper journalists.  Each writer may vote for up to ten players; to be admitted into the HOF, a player must be approved by 75 percent of those casting ballots.  Players receiving less than five percent approval are removed from future BBWAA ballots.  To be eligible, a player must have competed in at least ten seasons.  A single game counts as a season in the eyes of the Hall.  The player must have been retired at least five seasons if living, or deceased at least six months.  If a player comes back and plays in the majors, the clock restarts.

Exceptions to the selection criteria include Lou Gehrig, who was elected in 1939.  While still playing for the Yankees in June 1939, the Iron Horse was diagnosed with ALS.  He retired immediately and was inducted into the Hall in December [Mr. Gehrig died in July 1941].  Roberto Clemente, who was killed in a plane crash while delivering aid to earthquake victims in Nicaragua in 1972, was elected three months after his death.  Addie Joss, a pitcher for the Cleveland Naps in the early 1900s, was elected in 1978 even though he only completed nine seasons before dying of TB meningitis at 31, at the height of his career.

Of the five players who comprised the inaugural Hall of Fame Class of 1936, Ty Cobb garnered the highest vote percentage from the baseball writers, with 98.23.  That remained the highest BBWAA total for 56 years when Tom Seaver received 98.84 percent of the total in 1992.  Tom Terrific was surpassed in 2016 when the great Ken Griffey Jr. was elected to the Hall with a mind-numbing 99.32 percent of the vote.  Six inductees have received 100 percent of the vote.  The first was Josh Gibson, who in 1972 became the first Negro Leagues inductee.  Two years later, he was joined by fellow Negro League legend Cool Papa Bell, who also garnered a perfect score.  Last week, former New York Yankee closer Mariano Rivera got every vote.  The three other HOF inductees to have received 100 percent of the vote were ushered in by the Veteran’s Committee.  In 2014, former managers Bobby Cox and Tony LaRussa gained admission in the same class, while former Atlanta Braves executive John Schuerholz was named on 16 of 16 ballots in 2017.

Through the elections of 2018, 323 people have been inducted into the Baseball Hall of Fame, including 224 former MLB players, 32 executives, and 35 Negro League players and executives.

In addition, the Hall includes 22 managers and ten umpires.  Effa Manley, who owned the Newark Eagles and served as treasurer of the Negro National League, was the first woman inducted, in 2006.  The Hall also honors those who cover the sport.  The J.G. Taylor Spink Award is presented annually to baseball’s top writer, while the Ford C. Frick Award goes to a broadcaster for major contributions to baseball.

The National Baseball Hall of Fame and Museum is open seven days a week, 362 days a year.  Closed only on Thanksgiving, Christmas and New Year’s Day, hours of operation are 9 a.m. to 5 p.m. from Labor Day through Memorial Day.  The Hall offers extended hours in the summer when it is open from 9 a.m. to 9 p.m.  Admission for adults [13-64] is $23 and $ 15 for seniors [65+].  Cost for children [7-12] is $12, with active/retired military and children under six gaining free admission.