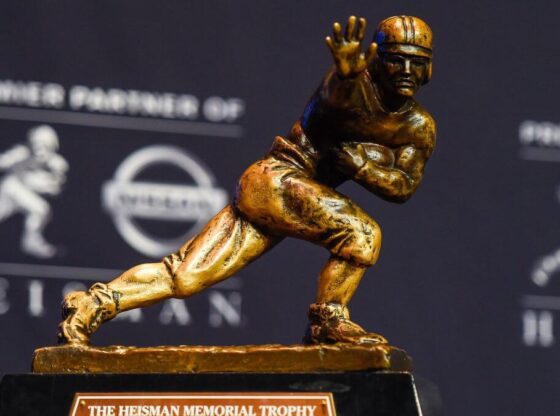 The Heisman Trophy is the most famous individual trophy in all of sports.  First awarded in 1935, it was originally called the Downtown Athletic Club [DAC] Trophy and was given to the most valuable college football player in the east by the DAC, a private social and athletic club in Manhattan.  Following the death of DAC athletic director John W. Heisman in October 1936, the award was renamed in his honor and broadened to include players west of the Mississippi.  Designed by sculptor Frank Eliseu, the Heisman Trophy is modeled after Ed Smith, who played running back for NYU.  The award, cast in bronze, is 13.5 inches tall and weighs 45 pounds.  The Heisman Trophy has been awarded 82 times.  One copy is presented to the winner while another is given to his school.  Unlike an Olympic gold medal, there is only one Heisman awarded each year, making it the most coveted individual award in sports.

Le Coupe Stanley – the Stanley Cup – is awarded annually to the winner of the NHL playoffs.  Originally commissioned in 1892 as the Dominion Hockey Challenge Cup, the trophy is named for Lord Stanley of Preston, then-Governor General of Canada.  The silver and nickel alloy trophy is topped with a copy of the original bowl of the Dominion Cup.  The Cup is 35 inches tall, weighs 35 pounds, and is engraved with the names of select players, coaches, management and club staff from the winning team.  The one-piece Cup is comprised of a five-band barrel that can contain 13 winning teams per band.  To prevent it from growing, when the bottom of the band is full, the oldest band is removed and preserved in the Hockey Hall of Fame.  The Stanley Cup is steeped in traditions, the oldest of which is the celebratory drinking of champagne out of the Cup by the winning team.

Professional boxing is a mess, but the heavyweight title belt is one of the coolest trophies in sports.  The first belt given for prize fighting was presented in 1810 by King George III to bare-knuckle boxer Tom Cribb, after he defeated Tom Molineaux for the English title in Oxfordshire.  Since 1922, The Ring magazine has awarded world championship belts within each weight class.  The first Ring world title belt was awarded to Jack Dempsey, who retained it from 1922 to 1926, when he lost a unanimous ten-round decision to Gene Tunney.  Other legendary fighters to have owned the heavyweight title belt include Joe Louis, Rocky Marciano, Muhammed Ali, Joe Frazier and George Foreman.  Unlike the Stanley Cup, which is passed from winner to winner, a new belt is awarded each time a new champion is crowned, and winners keep their belts permanently.

The Olympic gold medal represents the pinnacle of sporting achievement.  In the first two modern Olympic Games, winners received a silver medal or cups or trophies as first-place prizes.  Beginning in 1904, gold medals were awarded to the winner of each Olympic event.  The use of gold diminished during the first two World Wars, and the last series of Olympic medals to be made of solid gold were awarded at the 1912 Stockholm Games.  Olympic gold medals must be made from at least 92 percent silver, and contain a minimum of six grams of gold.  All Olympic medals must be at least 60mm in diameter and 3mm thick.  From 1928 through 1968 the design featured Greek goddess Nike with Rome’s Colloseum in the background and text naming the host city.  Since 1972, Olympic gold medals have featured designs minted by the host country.  Gold medals differ between Winter and Summer Olympics, but both remain among the most coveted trophies in all of sports.

Officially known as the Golf Champion Trophy, the Claret Jug is presented to each year’s winner of the Open Championship, the oldest of golf’s majors.  Beginning with the inaugural Open in 1860, the winner was presented with the Challenge Belt, made of rich Moroccan leather and embellished with a silver buckle and emblems.  In 1873, the Golf Champion Trophy, made by Mackay Cunningham & Company of Edinburgh, was first awarded to the Open winner.  Following the 1927 championship, won at St. Andrews by Bobby Jones, it was decided the Claret Jug would be retained at the Royal &Ancient Golf Club of Scotland and the winner would be presented a replica, which remains in practice today.  Each year, the winner’s name is engraved on the Claret Jug before it is presented to him for becoming “Champion Golfer of the Year.”  Harry Vardon won six Claret Jugs in his illustrious career, more than any player in history.

The Gentlemen’s Singles Trophy was first presented by the All England Club in 1887 to the winner of Wimbledon.  It replaced the Field Cup and Challenge Cup, which had been awarded in the prior ten years.  The All England Lawn Tennis Club spent 100 guineas to purchase the trophy, which is made of silver gilt.  It stands 18 inches high, has a diameter of 7.5 inches and is inscribed with The All England Lawn Tennis Club Single Handed Championship of the World.  Around the bowl are engraved the dates and names of the Champions.  In 2009, a black plinth with an ornamented silver band was added in order to create more space for engraving the names of the Champions.  Engraving of the trophy is completed by Roman Zoltowski, who drives from Poland each year to hand-engrave each of the 48 trophies awarded at Wimbledon.  Pete Sampras and Roger Federer have each won the Gentlemen’s Singles Trophy a record seven times.  The Venus Rosewater Dish – given to the Ladies’ Singles Champion at Wimbledon – is a close second to the Gentlemen’s Trophy.

Beginning in 1949, the winner of the Masters golf tournament is presented a distinctive green jacket.  The green sport coat is the official attire worn by members of Augusta National [which hosts the tournament] while on the club grounds.  Each Masters winner becomes an honorary member of the club and is presented with the garment by the previous year’s champion at a ceremony inside the Butler Cabin.  Made of a blend of tropical-weight wool and polyester, the sport coats have been crafted by Cincinnati clothier the Hamilton Tailoring Company since 1967.  The defending champ can wear the jacket anywhere he wants for the first year [Phil Mickelson wore his on an outing to Krispy Kreme] but it must be returned to Augusta National for the following year’s Masters, where it is then permanently kept.  Sam Snead was the first champion to get a jacket and Jack Nicklaus has six, more than any golfer in history.

The Indianapolis 500 is the most important event in motorsports and the Borg-Warner Trophy is racing’s biggest prize.  In 1935, the Borg-Warner Automotive Company commissioned Robert J. Hill and Chicago-based Spaulding-Gotham, Inc. to design a trophy for the 500.  It was first presented to 1936 Indy winner Louis Meyer, who remarked, “Winning the Borg-Warner Trophy is like winning an Olympic medal.”  With an original cost of $ 10,000, the award was refurbished in 1992 and is now valued at more than one million dollars.  The faces of the winning drivers grace the trophy’s squares.  They date back to Ray Harmon, winner of the first Indianapolis 500 in 1911, and include four-time champions A.J. Foyt, Al Unser, and Rick Mears.  Bobby Rahal is the last driver to have his likeness placed on the original trophy, as all the squares had been filled.  New bases were added to the trophy – in 1987 and 2004.  Besides displaying Indy 500 champions, the Borg-Warner Trophy features a 24-karat gold portrait of late Indianapolis Motor Speedway owner Tony Hulman Jr., whose likeness was added in 1987.

The Auld Mug, as the trophy is affectionately known, is awarded to the winner of the America’s Cup match races between two sailing yachts.  The Cup is an ornate sterling silver bottomless ewer crafted in 1848 by the famous London jeweler, Garrard & Co., and is the oldest international sports trophy.  Henry William Paget, 1st Marquess of Anglesey, bought one and donated it for the Royal Yacht Squadron’s 1851 Annual Regatta around the Isle of Wight.  In August 1851, fledgling New York Yacht Club schooner America raced against 15 vessels in the RYS Regatta, with America finishing eight minutes ahead of the closest rival.  The trophy, originally dubbed the R.Y.S. £100 Cup, became officially known as America’s Cup following the races.  The trophy was held by the NYYC from 1857 [when it was donated to the club] until 1983 when the Cup was won by the Royal Perth Yacht Club, ending the longest winning streak [132 years] in the history of sport.  The America’s Cup is inscribed with the names of the yachts that competed for it, and has been modified twice by adding matching bases to accommodate more names.

The Gold Glove Award is given annually by Major League Baseball to the best fielders at each of the game’s nine defensive positions in both the National League [NL] and American League [AL].  The awards are voted on by the managers and coaches in each league, with the Society for American Baseball Research [SABR] accounting for one-quarter of the vote.  The award was created from a glove crafted from gold lame-tanned leather and affixed to a walnut base.  First introduced in 1957 by baseball glove manufacturer, Rawlings, the Gold Glove Award was created to commemorate the best fielding performance at each position in all of baseball.  Beginning in 1958, separate awards were given for the NL and AL.  The most Gold Gloves ever won by one player is 18 by pitcher Greg Maddox.  Third baseman Brooks Robinson and pitcher Jim Kaat are tied for second-most, with 16 each.  MLB and Rawlings announced an all-time Gold Glove Team during the award’s 50th anniversary, at baseball’s 2007 All-Star Game.

Got a favorite sports trophy?  Cast your vote HERE.