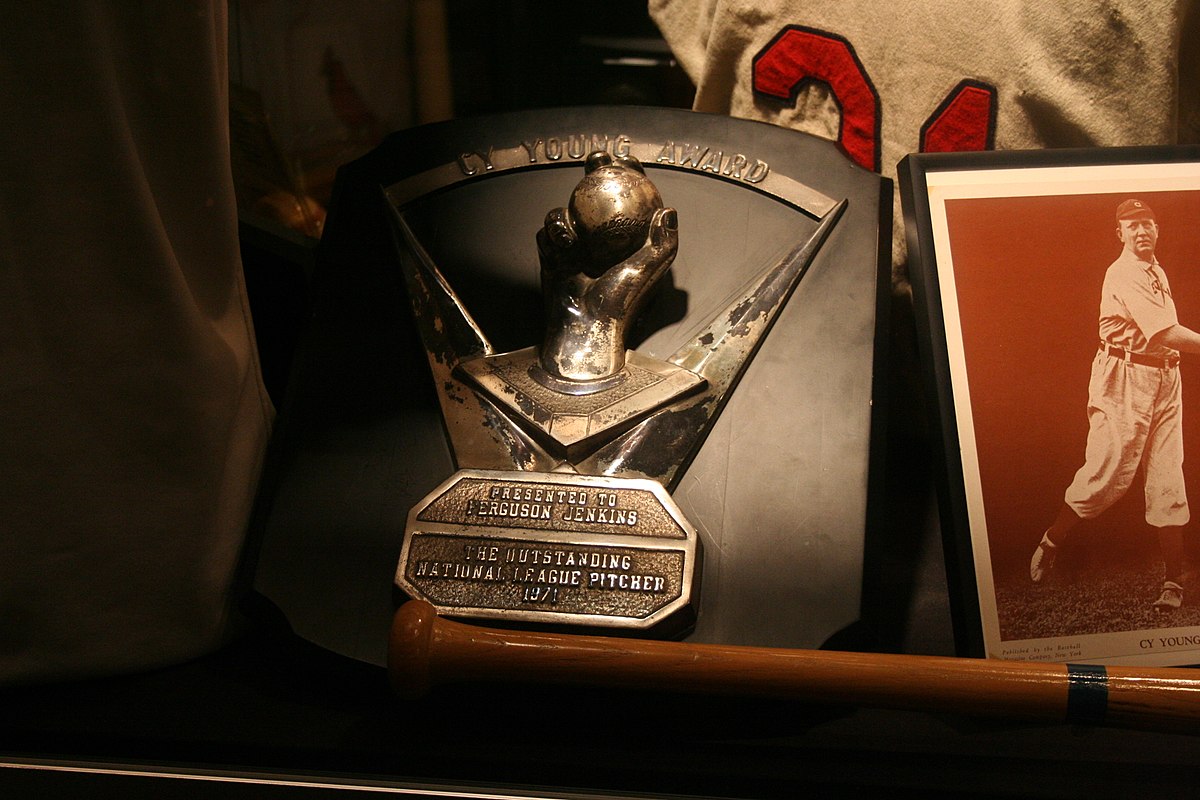 The Cy Young Award is a baseball pitcher’s most coveted prize.

Named for Denton True Young [Daily Dose, March 15], the winningest pitcher in Major League Baseball history, the award is given annually to the best pitchers in MLB, one each for the American League [AL] and National League [NL].  The award was first introduced in 1956 by baseball Commissioner Ford C. Frick in honor of Mr. Young, who was nicknamed “Cy” because his fastball did so much damage to fences they looked like a cyclone had hit them.  Frick chose to honor Young—who won a record 511 games during his brilliant 22-year career—in the season following his death in November 1955.  Ford Christopher Frick was originally a writer.

He later worked as public relations director of the National League before serving as NL President from 1934 to 1951.  Mr. Frick became the third commissioner in the history of Major League Baseball in 1951, a post he held until his retirement 14 years later.  The award was originally given to the single best pitcher in the major leagues, but after Frick retired following the 1966 season, the rules were changed and the award was given to one pitcher in each league.

The Cy Young Award is voted on by members of the Baseball Writers Association of America [BBWAA], a professional association for baseball journalists writing for daily newspapers, magazines and qualifying Web sites.  Founded in 1908, the BBWAA’s original purpose was to improve working conditions for sportswriters and professionalize the press box.

The BBWAA is comprised of over 250 members whose most public function is to annually vote on candidates for the National Baseball Hall of Fame.  In addition to the Cy Young Award, the writers also vote on the annual Most Valuable Player, Rookie of the Year and Manager of the Year Awards at the end of each season.  Only pitchers are eligible for the Cy Young Award and each MLB team has one representative on the ballot.  Between 1956 and 1958, a pitcher was not allowed to win the award more than once.

The rule was changed in 1959, and there have been 17 multiple winners in the award’s 59-year history, including Randy Johnson and Greg Maddux, who have each won a record four Cy Young Awards in a row.   Prior to 1970, writers only voted for the best pitcher and used a formula of one point per vote.   After Denny McLain [Daily Dose, March 28] and Mike Cuellar tied for AL honors in 1969—the only tie in the history of the Cy Young Award—writers began voting for three pitchers, using a system of five points for a first place vote, three for a second place vote and one for a third place vote.

Beginning in 2010, each writer casts a vote for the top five pitchers in each league, with a weighted sum of the votes formula determining the winner.  Under the current system, a first place vote earns seven points, while second through five earn four, three, two and one point, respectively.  The pitcher with the highest score in each league wins the award.  If two pitchers receive the same number of votes, the award is shared.

There have been 17 unanimous Cy Young Award winners; eleven from the NL and six from the AL.  Sandy Koufax [Daily Dose, January 19] won unanimously three times, all during the era when only one award was given across both leagues.  Roger Clemens has more Cy Young Awards [7] while playing for the most teams [4].  He is also the oldest winner [42].  Dwight Gooden [Daily Dose, November 16] is the youngest winner [20], while Fernando Valenzuela is the only player in history to win the Cy Young and Rookie of the Year Awards in the same season  [1981].

The 1968 season produced two impressive winners; McLain of the AL, who had the most wins [31] of any Cy Young Award winner in history, and the NL’s Bob Gibson, who posted the lowest ERA [1.12] of all time.  The Perrys are the only two brothers to have earned pitching’s most prestigious honor—Jim was the NL winner in 1970 and Gaylord was named twice, in the AL in 1972 and the NL in 1978.

Steve Carlton holds the distinction of being the only Cy Young winner from a losing team, claiming the award in 1972 after going 27-10 for a last-place Phillies team that only won 59 games all year.  Carlton went 13-20 the following season to become the only recipient to lose 20 games the year after winning the award.

On this date in 1956, the Cy Young Award was introduced.  Denton True Young was elected to the Baseball Hall of Fame in 1937, while Ford C. Frick was inducted in 1970.