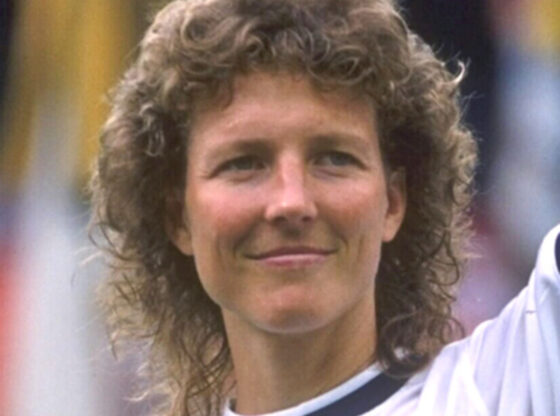 Happy 51st birthday to one of the greatest soccer players of all time.

Michelle Akers played on the U.S. Women’s National team from 1985 to 2000.  During that time she led the U.S. women to an Olympic gold medal and two World Cup titles.  An original member of the U.S. women’s team, she scored the first goal in team history, was voted FIFA co-Player of the Century [with Sun Wen of China], and is one of only four players—male or female—to score more than 100 goals in international competition.  Akers and Mia Hamm [Daily Dose, 5/10/16] are the only female players named to the FIFA 100, a list of the greatest living soccer players selected in 2000.

Born in Santa Clara, California, on this date in 1966, Michelle Ann Akers grew up in Shoreline, Washington, about nine miles west of downtown Seattle.  She attended Shorecrest High School, where she was a standout soccer player.  Akers was dominant and practiced with the boys’ team as much as the girls’.  As a junior, she led the Lady Highlanders to the 1993 state title and was a three-time high school All-American.  At 5’10”, 150 pounds and possessing tremendous all-around ability, Akers was highly recruited by the college soccer powerhouses.  One–North Carolina–had won nine consecutive NCAA titles from 1982 to 1994.  Put off by UNC coach Anson Dorrance’s arrogant attitude, she chose the University of Central Florida.  “I didn’t like his demeanor.  Central Florida wasn’t polished, the forerunner, the expected winner.  They were like blue collar workhorses, and that’s why I liked them.”

At Central Florida, Akers led the Golden Knights to three NCAA tournament appearances, including a berth in the Final Four in 1987.  A four-time collegiate All-American, she was UCF’s Athlete of the Year in 1988-89, the all-time leading scorer in UCF history, and had her number 10 jersey retired by the school.  Akers capped off her career in 1988 by becoming the first female recipient of the Hermann Trophy [Daily Dose, 7/29/16] as the top player in college soccer.

Akers played for the first-ever U.S. Women’s National team in August 1985, scoring the first goal in the history of the program, against Denmark.  In the 1991 international season, she scored 39 goals in 26 games.  Akers led the U.S. team in the inaugural FIFA Women’s World Cup in 1991, scoring ten goals—including five in one game—to earn the Golden Boot as the tournament’s leading scorer.  In the title game against Norway, she scored both goals to give the U.S. a 2-1 victory and its first World Cup title.

Chronic Fatigue Syndrome is a complicated illness. Characterized by extreme exhaustion that cannot be explained by any underlying medical condition, those suffering with CFS have limited ability to carry out ordinary daily activities and have a poor quality of life. Symptoms include fatigue, loss of memory or concentration, sore throat, unexplained muscle pain, headache, and joint pain.  Physical or mental activity can make it worse, but rest doesn’t make it better.  An estimated one million Americans suffer with CFS.  Utterly exhausted after the World Cup, Akers was diagnosed with Chronic Fatigue Syndrome in 1994.  She changed her diet and training habits but never fully recovered.  In order to reduce beatings doled out by opposing defenders, Akers moved from forward to midfield, where she transitioned from a goal scorer to gritty defender.

After finishing a disappointing third in the 1995 World Cup, Akers led the U.S. women to gold at the 1996 Atlanta Olympics.  Three years later, she was part of the U.S. team that won the 1999 World Cup in dramatic fashion, as Brandi Chastain [Daily Dose, 10/8/15] buried the game-winner on the final kick of a shootout to beat China.  Akers, along with Hamm, Chastain, Carla Overbeck and Briana Scurry, was named to the tournament’s All-Star Team.

One of the pillars of the U.S national team for 15 years, Michelle Akers is one of the greatest soccer players in history.  At Central Florida, she was a four-time All-American, Hermann Trophy winner, and is the school’s all-time leading scorer.  Akers won gold medals in the 1996 Olympics and 1998 Goodwill Games, led the U.S. women to two World Cup titles in three appearances, and earned the Golden Boot Award as top scorer in the 1991 World Cup tournament.  At the time of her retirement in 2000, she was second only to Mia Hamm in most career international goals.  Akers was ESPN Athlete of the Year in 1985 and received the 1998 FIFA Order of Merit—the sport’s highest honor—for her contribution to soccer.  Michelle Ann Akers was inducted into the National Soccer Hall of Fame in 2004 and was named FIFA co-Player of the Century in 2000.

Married and the mother of a son, Michelle Akers currently resides in Powder Springs, Georgia, where she operates a non-profit farm that cares for rescued horses. 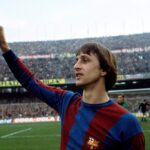 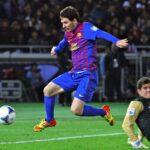 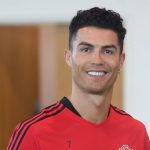