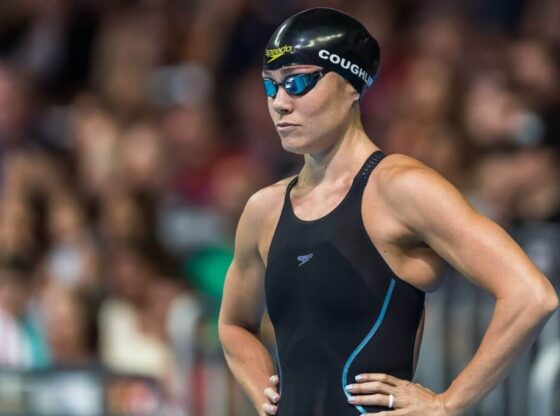 Natalie Coughlin is the only female U.S. Olympian to win six medals at one Olympic Games.

One of the greatest swimmers the United States has ever produced, Coughlin [COG-lin], won 12 Olympic medals, joining Jenny Thompson and Dara Torres for the most ever for an American woman.  In 2008, she became the first U.S. female athlete to win six medals in one Olympiad.  A three-time Olympian, Coughlin is the first woman in history ever to win a 100m backstroke gold in two consecutive Olympics [2004 and 2008].  With unprecedented talent and steely perseverance, Coughlin was one of the most versatile swimmers, male or female, in history.  “Nat” set world records in backstroke, freestyle, butterfly and the toughest event of all – individual medley.  Coughlin has won a total of 60 medals in major international competitions while setting American and world records.  Her 20 World Championship medals is a record for women.  In 2002, she became the first swimmer since Tracy Caulkins to win five U.S. National titles at one meet.

Born in Vallejo, California – on the northeastern shore of San Pablo Bay, 30 miles north of San Francisco – August 23, 1982, Natalie Ann is the eldest of two girls.  Her father, Jim, is a retired Vallejo policeman and her mother, Zennie, a paralegal.  She began swimming at ten months, taking lessons at the local YMCA, and joined her first competitive swim team at six.  Her parents were supportive of their daughters’ swimming without being pushy.  Coughlin’s younger sister, Megan, swam collegiately for UC-Davis.  After finishing grade school at St. Catherine of Sienna, Coughlin entered Carondelet High School in nearby Concord.  Coughlin flourished at Carondelet, an all-girls private Catholic school of 800 students that shares part of its campus with its all-boys counterpart, De La Salle.

A teenage Phenom, Coughlin set three national high school records.  Following her sophomore year, she became the first swimmer to qualify for Summer Nationals in all 14 events.  Coughlin was the top female point-getter on both the 1998 and 2000 Scholastic All-American teams and was named 1998 Swimming World High School Swimmer of the Year.  A torn labrum muscle suffered while doing butterfly sets in her junior year kept Coughlin off the 2000 U.S. Olympic team.  Coughlin opted not to have surgery and underwent an arduous rehab process following the injury.   After graduating Carondelet in 2000, she chose to stay close to home and accept a scholarship to swim at Cal.

Natalie Coughlin became the most decorated swimmer in Cal history.  She won 11 individual NCAA titles [of a possible 12], one relay title, and went 61-0 in dual meets over four years.  Coughlin set 11 Cal, six NCAA and four world records.  She broke 35 individual American records and three U.S. relay records en route to being named a three-time NCAA Swimmer of the Year.  Coughlin was a three-time finalist for the Sullivan Award as the best amateur athlete in America and won two Honda Awards as America’s best collegiate swimmer.  The 2002 Female World Swimmer of the Year and 2004 Female Collegiate Athlete of the Year also became the NCAA’s first three-time title winner: in the 100-yard butterfly as well as 100 and 200-yard backstrokes.  Coughlin owns the American and NCAA records in each of those events.

Ten days shy of her 20th birthday, Coughlin became the first woman to swim the 100m backstroke in under a minute, a mark she lowered four times over the next six years.  She swam the lead-off leg of the world record-setting 800m freestyle relay at the 2004 Olympics, a split time that would have won individual gold.  She left Athens with five Olympic medals, including gold in 100m back.  Four years later in Beijing, she captained the U.S. women’s team and became the only female swimmer ever to win medals in all six events [back, free, medley relay, individual medley, freestyle relay].  After failing to qualify in an individual event for the 2012 Olympics, Coughlin helped the U.S. women capture a bronze medal in the 4 x 100 meter freestyle relay in London.  It was the 12th medal of Coughlin’s Olympic career, tying her with Thompson and Torres for most ever for an American woman.

“Nat” made underwater propulsion an art.  Employing her powerful undulating dolphin kick, Coughlin would surface to the lead after turns and starts, demoralizing her competitors.  It was a skill she developed while recuperating from the shoulder injury she suffered as a high-schooler, when all she was allowed to do were kick drills.  Despite a crooked back – Coughlin has been diagnosed with double thoracic scoliosis, her spine is shaped like an S – Coughlin’s workouts are legendary.  She trained with the boys in high school and worked out with the men’s team at Cal.  “She’s got an amazing work ethic,” said Cal and U.S. Olympic women’s swim coach, Teri McKeever.  “She takes really great care of herself.”  Hyper flexible, she can touch her toes with her elbows.  At 5’8”, Coughlin is not tall for a swimmer, but her wingspan is 6’1”.  She can bench 70-pound dumbbells in each hand, squat 220, and does pull-ups with a 45-pound belt strapped to her waist.  “I love the competitiveness and the training,” says Coughlin, who graduated Cal with a degree in psychology.  “I love to push my body to be faster and stronger.  I love the feeling of racing against the best swimmers in the world.”

An East Bay lifer, Coughlin now lives in Lafayette, California, where she raises chickens, grows figs and strawberries, and tends to an expansive organic garden.  A food and wine enthusiast, Coughlin enjoys cooking.  She prepared a Chinese dish on the set of the Today Show at the 2008 Summer Olympics, has appeared as a judge on Iron Chef America, and competed against race car driver Danica Patrick, former NFL running back Tiki Barber, and Hell’s Angel Chuck Zito in a sports celebrity episode of Chopped.  Contestants were given 30 minutes to prepare a desert using protein powder, caramel popcorn, tangelos and olive oil cake.  Coughlin opted to make bread pudding – always a Chopped “no-no” – and took silver to Patrick, who used the ingredients to create a dessert sandwich.

Coughlin married Ethan Hall, a club team swim coach, in 2009.  Natalie Coughlin Hall was inducted into the University of California-Berkeley Hall of Fame in 2014.  Despite failing to qualify for the 2016 Rio Olympics, Mrs. Hall has not officially retired from swimming.  She remains one of the most versatile and talented swimmers in the history of women’s swimming.