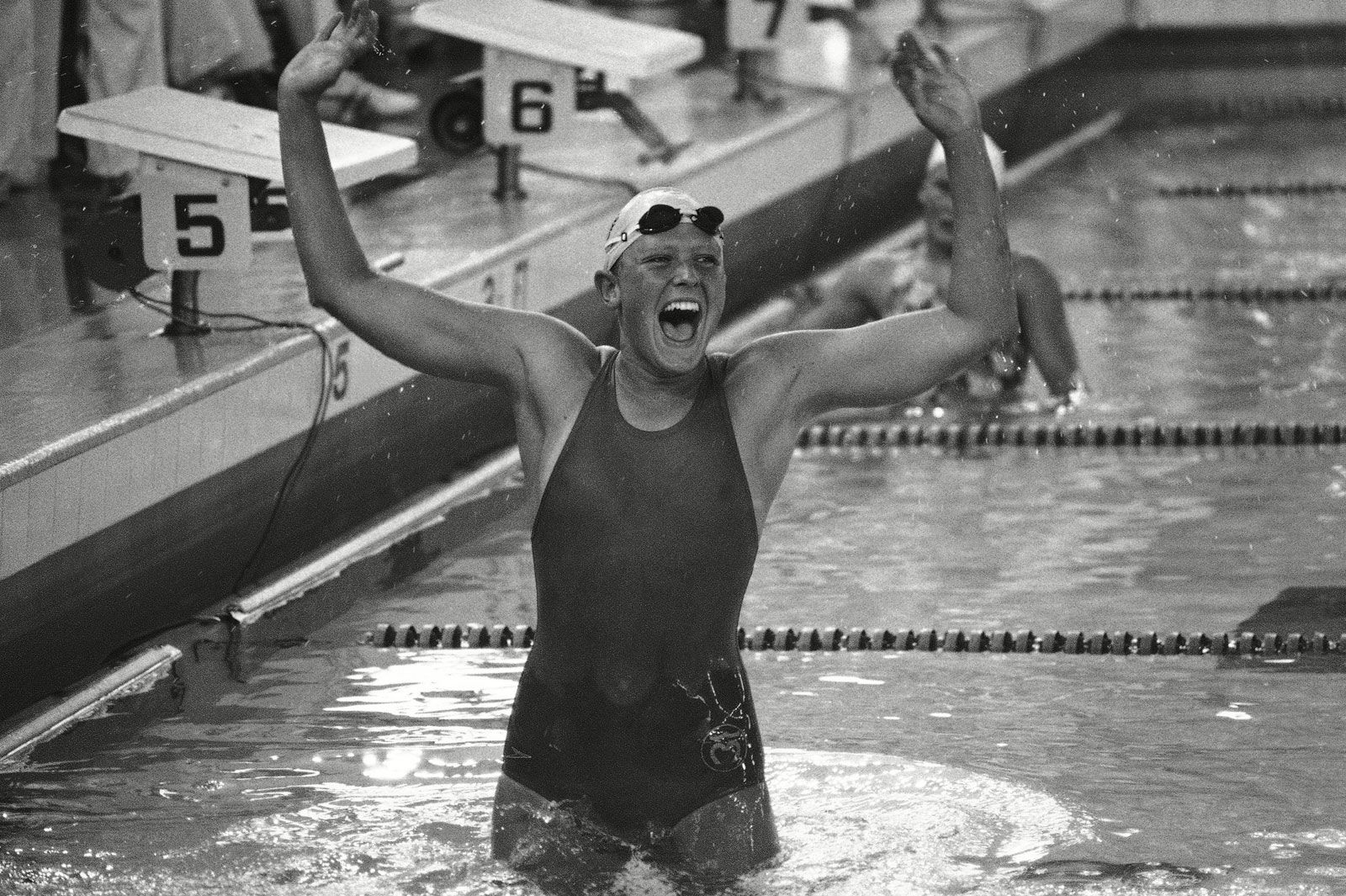 One of the most courageous Olympians in American history turns 60 today.

Shirley Babashoff is one of the greatest swimmers in the history of the sport.  She won 27 AAU titles, set 37 American records and, at one time, held the U.S. freestyle mark at every distance from 100 to 800 meters.  In two Olympic Games, Babashoff won nine medals—three of them gold—but it’s the four gold medals she did not win at the 1976 Montreal Games that are at the heart of one of the biggest injustices in Olympic history.

Born in Whittier, California, on this date in 1957, Shirley Frances was one of Jack and Vera Babashoff’s four children, all of whom became competitive international swimmers.  Shirley learned to swim at eight, and competed with the Huntington Beach Aquatic Club before eventually joining Mission Viejo Nadadores, the winningest club in U.S. swimming history.  Babashoff attended Fountain Valley High School—alma mater of actress Michelle Pfeiffer—where she led the Lady Barons to the first state swim title in school history.  She rose at 4:30 every morning to train before school, then returned to the pool after classes for another workout.  At her peak, she was swimming 20 miles per day, weekends and holidays included.  At 15, she made the U.S. Olympic team, where she won silver medals in the 100 and 200 meter freestyle at the 1972 Summer Games in Munich.  After finishing fourth in the 400 free, she swam the freestyle leg on the 4 x 100 meter medley relay team that captured gold in Olympic-record time, and won another gold medal with the 4 x 100 freestyle team while setting a new world record.

The U.S. women captured 18 swimming medals in Munich—eight of them gold—while East Germany collected a total of five and did not have a single swimmer win a race.  Babashoff did not take notice of the East German swimmers in Munich, saying, “They weren’t outstanding swimmers.”  At the 1973 World Championships in Belgrade a year later, she noticed something strange was going on.  “The East Germans came out of the locker room and they were so big, they looked like wrestlers.”  The team that had not won a gold medal the year before was now dominant.  In a sport often decided by fingertips, the East Germans were clobbering the Americans by body lengths.  By 1976, it was clear they were doping.

Shirley Babashoff was considered one of the greatest freestylers in U.S. history. Some called her the female Mark Spitz.  “She was a special, once-in-a-lifetime talent,” said Chuck Wielgus, executive director of USA Swimming, the sport’s governing body in America.  After being named 1974 USA Sportswoman of the Year, Shirley took first place in the 200 and 400 meter freestyle events at the 1975 World Championships.  Her finest performance came at the 1976 U.S. Olympic Trials, where she won every freestyle event and the 400 meter I.M.  In one of the greatest swimming feats of all time, the 19-year-old set three U.S. records in the heats, three more in the finals, and broke a world record in the 800 meter freestyle.

Going into the 1976 Montreal Games, Babashoff was heavily favored to win multiple medals, even appearing on the cover of Sports Illustrated under the headline, “U.S. Gold Medal Hopefuls.”  When asked by the press how she expected the East Germans to perform, Babashoff said, “Well, except for their deep voices and mustaches, I think they’ll do fine.”  Four years after failing to win a single race in Munich, the East Germans won ten of 11 individual gold medals.  In 13 total events [including two relays], the East German women shattered eight world records while capturing 18 total medals.  After coming away with four silver medals and one gold, the heavily-favored Babashoff made comments implying the East Germans were on growth hormones.  She was vilified by the media, who portrayed her attitude as “sour grapes.”  Headlines called her “Surly Shirley” and she and her teammates were branded “ugly Americans.”  Time magazine ran a photo of Babashoff above a caption that read “Loser,”and the American women were considered failures after coming away from the 1976 Olympics with just seven medals [one gold, four silver, and two bronze]—11 fewer than they had won in Munich four years earlier.  Meanwhile, the American men—led by legenday coach Doc Counselman [Daily Dose, 12/28/16]—were dominant, claiming 27 of a possible 35 swimming medals, making the disparity all the more glaring.

After the fall of the Berlin Wall in 1989, documents were discovered revealing an extensive system of state-sponsored doping that proved Babashoff’s suspicions. Starting in the mid-1970s, the East Germans operated the most sophisticated sports medicine and doping program the world has ever seen.  Designed to show the world that communism superior, girls were doped without their knowledge or their parents’ consent.  More than 10,000 athletes were party to the abuse.  Many of the girls developed health issues later in life—cancer and reproductive problems—or had children with birth defects.

Although many were victimized, the most visible victim of the injustice was Shirley Babashoff.  The only one who had the guts to speak out never got her due and was cheated out of four Olympic gold medals.  Unlike Lilly King, whose finger-wagging and vocal criticism of Russian athletes who were caught doping at the 2016 Rio Games earned her hero status,  Babashoff was painted as a sore loser.  “It would have changed my life dramatically if I had come back from Montreal with all of the medals that I deserved,” she said. “I would have had some endorsements.”  Buoyed by a state-orchestrated drug program, East Germans claimed titles in ten individual races in Montreal.  The USA team set nine American records at those Games–all of which were eclipsed by dopers.  Robbed by a Cold War-era anabolic steroid regime that powered East Germans over Americans, Babshoff sought justice.  Following the cheating discovery, the IOC turned down a request by the U.S. to revised the record books and award new medals.  Had the East German performances been removed, Babashoff would have been an American hero and returned from Montreal with five gold medals and one bronze.  Instead, she portrayed as a sore loser.

Shirley Frances Babashoff was named American Swimmer of the Year in 1976 and was inducted into the International Swimming Hall of Fame in 1982.  In April 2005, she received the Olympic Order, the highest award of the Olympic movement, to honor her for illustrating the Olympic ideals through her actions and for achieving remarkable merit in swimming.

Forty years ago the U.S. women put on one of the most spectacular and inspired performances in swimming history. Driven by pride and a good amount of anger in the final event of the meet, Kim Peyton, Wendy Boglioli, Jill Sterkel and Shirley Babashoff rallied as a team to do what they could not do individually—win gold.  Find out more about one of the greatest untold stories in Olympic swimming history in The Last Gold, a feature-length documentary produced by USA Swimming released in 2016.

Happy 60th birthday to one of the greatest swimmers America ever produced.