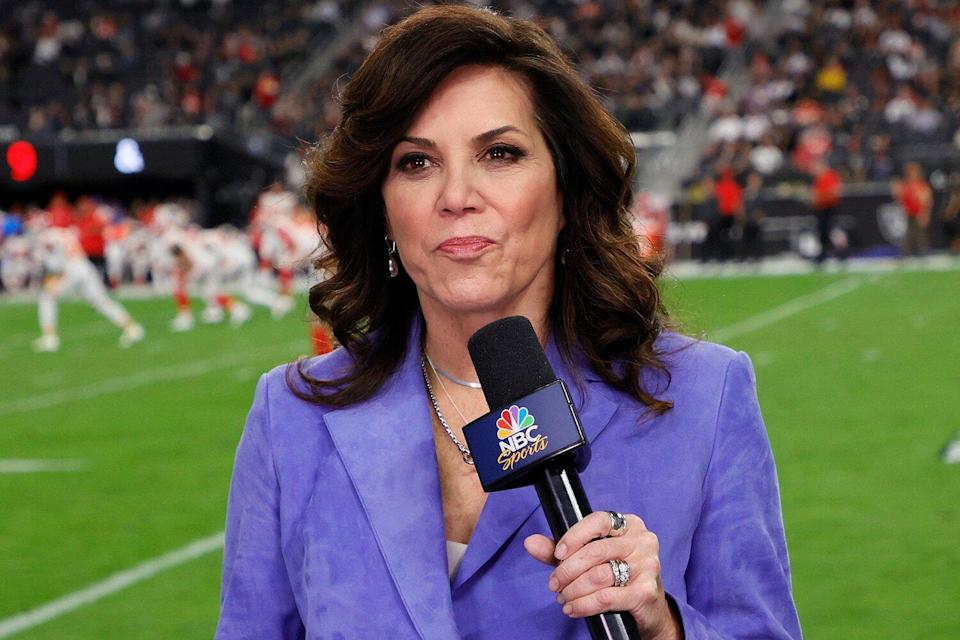 First employed 44 years ago this week, the sideline reporter has become part of televised sports in America.

The brainchild of Dick Ebersol, then-executive assistant to Roone Arledge at ABC Sports, the idea grew out of the tragedy of the 1972 Olympics.  After witnessing the immediate information new wireless technology provided while producing coverage during the Munich Massacre – the killing of 11 Israeli Olympic team members during the ’72 Summer Games — Ebersol wondered what else was possible.  He hatched the idea of placing a reporter, with microphone, on the sidelines during a college football telecast to help capture the drama and excitement of the game.  Jim Lampley beat out 430 other contestants for the job.  On September 7, 1974, the boyish Lampley broadcast from the sidelines of a Tennessee – UCLA game in Knoxville.

Here are ten of the best at providing information from the sporting playing fields.

Born in Quincy, Massachusetts, on this date in 1953, Lesley Visser is an original.  A former writer for the Boston Globe, Visser became pro football’s first beat writer when she was assigned to cover the New England Patriots.  The first woman analyst to call a televised NFL game, Visser is the first woman to cover the World Series and the only woman to handle the Super Bowl trophy presentation.  Voted the top female sportscaster of all time in an American Sportscasters Association poll, Visser has covered the Olympics, tennis, Triple Crown horse racing and served as a sideline reporter for Monday Night Football.  The first woman to receive the Pete Rozelle Radio-Television Award from the Pro Football Hall of Fame, Lesley Visser is the only sportscaster in history – man or woman – to have worked a Final Four, NBA Finals, World Series, Olympics, Super Bowl and U.S. Open.

A former high school English teacher and handball coach, Tom Rinaldi has become the best questioner in sports.  A correspondent for ESPN since 2002, Rinaldi contributes to College Gameday and serves as a sideline reporter for some of college football’s biggest games.  He is part of ESPN’s golf coverage as an interviewer and essayist, where has won a dozen Sports Emmy Awards and six Edward R. Murrow Awards.  After earning his master’s degree from the Columbia University Graduate School of Journalism, Rinaldi released his first book, a must-read called The Red Bandana — the story of 9/11 hero Welles Crowther.  Rinaldi’s 2010 televised conversation with Tiger Woods on the heels of the disgraced golfer’s one-car accident in front of his home helped Rinaldi establish his reputation one of the most skilled interviewers on television.

An Air Force brat who preferred watching sports over children’s shows growing up, Pam Oliver was a track All-American at Florida A&M.  After beginning her career as a news reporter, she became a sports anchor in Tampa.  Oliver was hired by ESPN in 1993.  Two years later, she joined Pat Summerall and John Madden – Fox Sports’ number-one broadcast team – as an NFL sideline reporter.  Oliver has provided court-side coverage for NBA playoff coverage for TNT and is still under contract with Fox.  In 2015, she was replaced by Erin Andrews on the network’s number-one broadcast team of Joe Buck and Troy Aikman.  Undeterred, the classy Oliver continues to deliver solid reporting.

The most informative sporting reports don’t come from the sidelines, they come from “Inside the Glass.”  Since 2006, Pierre McGuire has been providing rink-side insights and interviews for NBC’s hockey coverage.  Born in New Jersey and raised in Montreal, McGuire played hockey, baseball and football at Hobart College, where he earned a degree in English.  In 1993, he became the youngest head coach in the NHL when he was hired by the Hartford Whalers.  McGuire writes for Sports Illustrated and provides commentary for several radio outlets.  With NBC, he teams with Doc Emrick and Eddie Olczyk to provide the best broadcast team in any sport.

The fastest-rising star on the sports broadcasting landscape is Doris Burke.  A point guard at Providence College, the former Doris Sable graduated as the school’s all-time assists leader.  Burke began her career in 1990 as a radio analyst, then migrated to play-by-play.  She is the first woman to serve as the basketball voice of the Big East.  The first female to call a New York Knicks game on radio and television, Burke was voted a 2003 Rudy Award as the best new face in sports television.  Since 2009, she has served as a sideline reporter for the NBA Finals for ABC, where she is unquestionably the best in the business.

After failing to make either the football or basketball teams at Northwestern University, Craig Sager found his place as Willie the Wildcat, the school’s mascot.  He found his calling patrolling the sidelines, landing in the Naismith Basketball Hall of Fame.  As a high-schooler in Illinois, Sager drew national attention at the height of the 1960s countercultural movement that surrounded the Vietnam War.  While his long-haired peers protested, Sager wrote an essay entitled, “How and Why I Should Show Respect for the American Flag.”  Sager worked as a news reporter, then briefly as a TV weatherman, before joining CNN in 1980.  He covered World Cup soccer, Winter Olympics, golf, tennis and football for CNN and its sister network, TBS.  The immensely likeable Sager was best-known as a sideline reporter for the NBA.  Wearing outlandish outfits that ranged from garish to ghastly, he provided insightful and entertaining interviews with players and coaches for over four decades.

Before she became Michelle Tafoya, she was known as Mickey Conley, the first female to call UNC-Charlotte men’s basketball.  A native Californian, Tafoya spent three years as a sports anchor in Minneapolis, where she covered the NFL Vikings and NCAA Golden Gophers.  Tafoya joined CBS Sports in 1994 as a reporter and host, making her debut at the U.S. Open Tennis Championships.  After five years with CBS, she joined ESPN/ABC, where – teamed with Al Michaels and John Madden on Monday Night Football — she found herself in one of the most prominent jobs in sports media.  Tafoya has covered basketball, Olympics, and served as studio host for a variety of telecasts.  In 2011, the two-time Emmy winner was named sideline reporter for NBC Sunday Night Football, where she has become the most recognized on-field journalist in sports while covering the NFL on America’s top-rated television program.

The dean of American motorsports journalism was Chris Economaki, who wrote his first column for the National Auto Racing News at 14.  He went on to become owner, publisher and editor of National Speed Sport News, the Bible of motorsports.  Economaki began as a track announcer in the 1940s and introduced America to televised auto racing.  He covered motorsports events for ABC’s Wide World of Sports, from the Indianapolis 500 to demolition derby.  Economaki worked for CBS Sports and was a contributor to ESPN’s SpeedWeek and TBS’ Motorweek Illustrated.  A member of more than a dozen motorsports halls of fame, Chris Economaki received the NASCAR Lifetime Achievement Award in 1998.

After graduating from Michigan, Tracy Wolfson began as a television sports anchor in New Jersey.  She worked for the MSG Network and has covered golf, auto racing, skiing, ice skating, tennis and rodeo, among others.  Since 2004, Wolfson has worked as a sideline reporter on CBS college football and basketball telecasts.  In her first season, she was named by one of the “Best New Faces” of the NCAA basketball tournament by USA Today. In 2006, CBS Sports chairman Sean McManus did away with sideline reporters for NFL telecasts, stating they were “diverting attention” from the booth and taking “away from the overall presentation” of the broadcast.  Eight years later, he changed his mind, and promoted Wolfson to the network’s top NFL broadcast team.  Wolfson, whom McManus called “the best sideline reporter there is” because of the quality of her interviews, is the lead field reporter for all CBS Sports telecasts, working with the network’s top team in every sport she covers.

Arizona native Alex Flanagan got her start in television news reporting.  She worked with Fox Sports Net, then joined ESPN in 2000, where she spent five years reporting from college football sidelines.  Flanagan has covered the College World Series, women’s tennis, and NCAA men’s and women’s basketball.  At ESPN, she was a SportsCenter and NFL Monday Night Countdown contributor before she joined NFL Network and NBC Sports.  Flanagan, who celebrates her 46thbirthday one week from this Sunday, has hosted both Summer and Winter Olympics coverage.  She serves as sideline reporter for NBC’s coverage of Notre Dame football and reports for NFL Network’s Thursday Night Football as well as NBC’s Football Night in America.