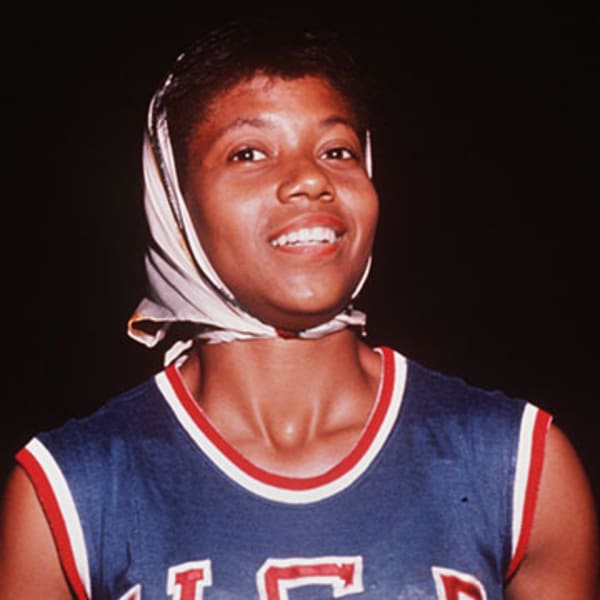 The daughter of a railway porter father and mother who worked as a maid, Wilma Rudolph was born into poverty in small-town Tennessee.  She overcame polio as a child to become an Olympic sprint champion and American icon.  As a young girl, Rudolph wore leg braces and underwent daily therapy treatments.  Doctors feared she would lose her ability to walk.  With hard work, determination, and her mother’s assistance, she regained full use of her legs.  “My doctors told me I would never walk again,” said Rudolph.  “My mother told me I would.  I believed my mother.”  Rudolph took up athletics at 12.  Eight years later, she was an Olympic champion.

After winning a bronze medal as the youngest member of the 1956 U.S. Olympic team, Rudolph set her sights on gold.  In 1959, she won AAU and Pan Am Games titles.  The following year, she made the world take notice.  The 1960 Summer Games where the first Olympics to be broadcast on television worldwide.  In Rome, Rudolph won gold medals in the 100m, 200m and the 4 x 100m relay, breaking world records in the process.  Dubbed the “Black Gazelle” by the press for her speed, beauty and grace, Wilma Rudolph became an international  superstar.  She defied odds by pulling off the sprint treble, which had never been done before, and her success gave a tremendous boost to women’s track in the U.S.  Rudolph was one of the first role models for black and female athletes and had a profound influence on future American Olympic stars such as Florence Griffith-Joyner and Jackie Joyner-Kersee.
Born in Saint Bethlehem, Tennessee, on this date in 1940, Wilma Glodean Rudolph was the 20th of 22 children from her father’s two marriages.  Born prematurely at 4.5 pounds, she was a sickly child, suffering from  measles, chicken pox, mumps, scarlet fever and double pneumonia.  At four, she contracted infantile paralysis caused by the polio virus and wore a brace on her left leg.  Turned away from the local hospital because of the color of her skin, Rudolph was nursed back to health at home by her mother, Blanche.  Her leg braces came off at nine.  Three years later, she took up track and field.  Growing up in the segregated South, Rudolph attended all-black Burt High School in Clarksville, about 50 miles northwest of Nashville.  She joined the basketball team and, in her second season, scored 803 points to set a new state record.

At 14, Rudolph was invited by Ed Temple, coach of the Tennessee State University women’s track team, to train with his sprinters.  That summer, she attended an AAU meet in Philadelphia and won all nine events she entered.  Rudolph continued to train with the TSU team – known as the Tigerbelles – while a high-schooler.  As a high school junior, she qualified to compete in the 1956 Melbourne Olympics at 200 meters.  The 16-year-old Rudolph was the youngest member of the U.S. Olympic team.  After being defeated in the preliminaries of the 200-meter race, Rudolph ran the third leg of the 4 x 100 m relay.  All four relay team members were Tigerbelles, and won the bronze medal while matching the world-record time of 44.9 seconds.  Rudolph returned to Clarksville, had a baby in her senior year, and graduated Burt High in 1958.

Rudolph enrolled at Tennessee State [a track and field powerhouse that produced Olympic gold medalists Ralph Boston and Chandra Cheeseborogh] and continued to train under Temple.  During the 1960 Olympic Trials – as a sophomore — she set a world record at 200 meters during the 1960 Olympic Trials that stood for eight years.  She also qualified in the 100 meters.  The 1960 Rome Olympics provided a launching pad for several black American athletes.  Cassius Clay [later Muhammad Ali], Oscar Robertson and Rafer Johnson emerged as stars, but no one matched Wilma Rudolph.  Displaying a poise and elegance never before seen from a female athlete, Rudolph dazzled the world by sweeping the sprint events.  Dubbed “The Tornado, fastest woman on Earth,” she emerged from the Olympics as America’s leading lady.

Following the Olympics, Rudolph competed in meets throughout Europe, where she was adored.  The French called her “La Perle Noire” [The Black Pearl], while the Italians referred to Rudolph as “La Gazzella Negra” [The Black Gazelle].  Upon returning to Clarksville, the Governor of Tennessee suggested a celebration in her honor.  At her adamant insistence, “Welcome Wilma Day” became the first integrated event in Clarksville.  She was named  Female Athlete of the Year by both AP and UPI in 1960 and won the Sullivan Award in 1961.  Dubbed the “Fastest Woman In History,” she competed in the prestigious Penn Relays in 1961 and was invited to a private meeting with President Kennedy in the Oval Office.  Rudolph’s celebrity helped break down gender barriers at previously all-male track events such as the Millrose Games.

After retiring from competition in 1962, Rudolph finished her bachelor’s degree in education at Tennessee State, then devoted herself to coaching and working with underprivileged children.  She taught second grade at her former elementary school and coached track at Bart High.  She married, raised four children, and moved about the country.  She became involved in nonprofits, the Jobs Corps and formed the Wilma Rudolph Foundation to promote amateur athletics.  Rudolph served as a track analyst for ABC Sports during the 1984 Olympics and coached track at DePauw University.

One of the most important athletes – male or female – in American sports history, Wilma Rudolph is a member of several halls of fame, including Black Sports [1973], U.S. National Track and Field [1974], U.S. Olympic [1983] and National Women’s [1994].  In 1984, the Women’s Sports Foundation selected Rudolph as one of the five greatest women athletes in the United States and, in 1996, established the Wilma Rudolph Courage Award.  The first recipient was Jackie Joyner-Kersee.  Tennessee State University named its indoor track in Rudolph’s honor and the U.S. Postal Service issued a  stamp in her honor in 2004.  In 1999, ESPN ranked Wilma Rudolph 41st –between Lawrence Taylor and Sandy Koufax on its list of the 100 greatest athletes of the 20th Century.