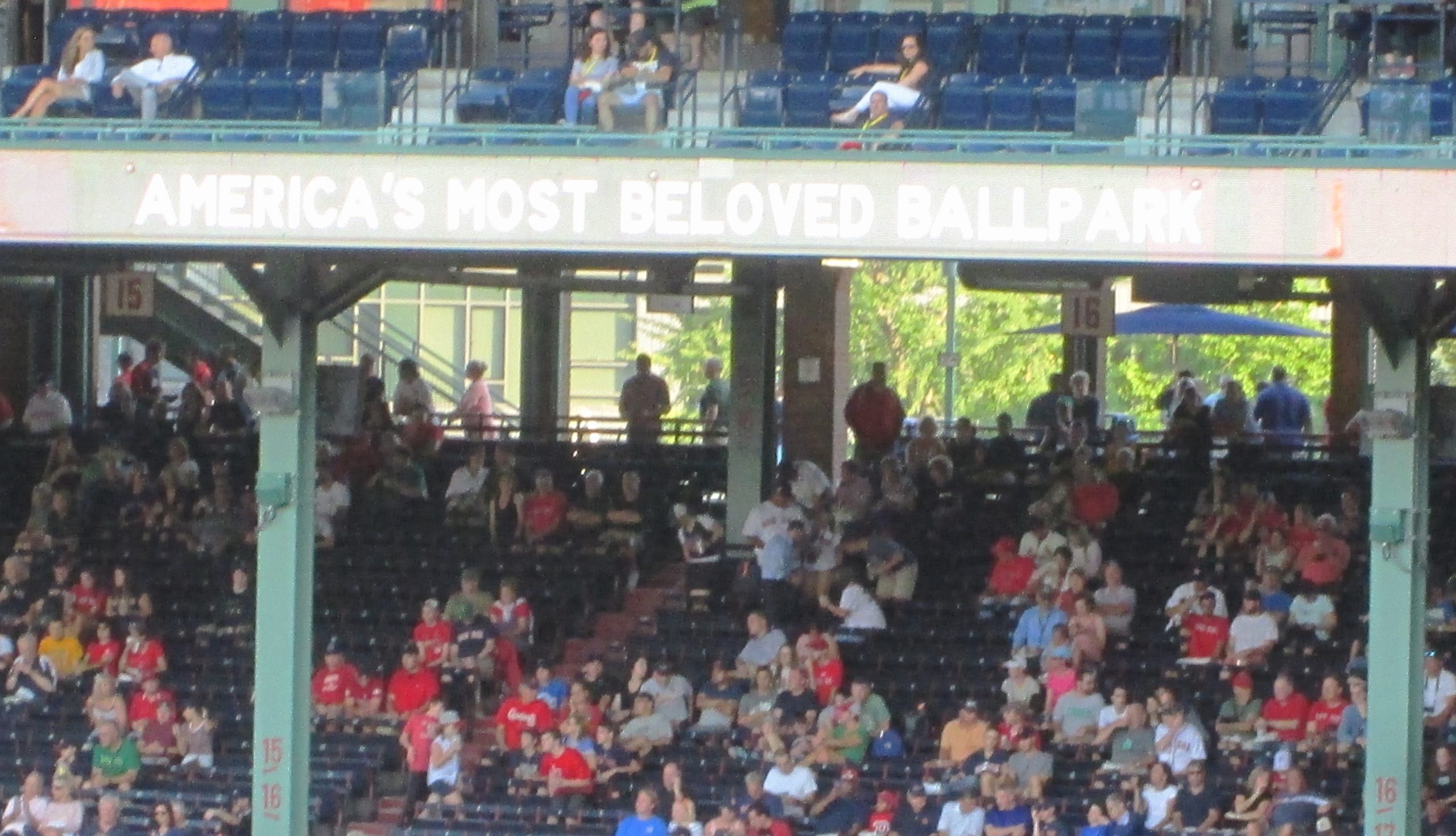 The best things in life never change.  Turkey on Thanksgiving, Fourth of July fireworks, Penn State’s football uniforms, and baseball at Fenway Park.  The oldest major league ballpark is where time stands still.  Fenway Park is where dreams are made, traditions are celebrated, and baseball is forever.  Uniquely nestled in Boston – one of America’s oldest and finest cities – Fenway is where the Babe got his start, where Teddy became Ballgame, the place Pudge waived it fair – while Dick Stockton voiced a call for the ages – and Papi delivered three World Series championships.  Baseball is played in its purest form at Fenway.  Take in a game at Four Yawkey Way and you will not see tee shirts being shot from guns, electronic shell games on the videoboard, or mascot races between innings.  In today’s world, much effort is spent trying to “go retro.”  Countless dollars are spent on building new ballparks that have the feel of yesteryear, throwback uniforms, and vintage stadium seats.  Fenway Park has always been retro while never chasing fads.  Former Red Sox pitcher Bill Lee called it a “shrine.” Added to the National Register of Historic Places in 2012 and a pending Boston Landmark, Fenway is one of the most well-known sports venues in the world.

Founded in 1901 as one of the American League’s eight charter franchises, Boston’s baseball team was known as the Americans for seven seasons.  They changed to Red Sox prior to the start of the 1908 campaign.  The club played home games at the Huntington Avenue Grounds [current location for the sports facilities of Northeastern University], a rickety old ballpark with seating capacity of just over 11,000 on the site of a wasteland.  In February 1911, Red Sox owner John Taylor set his sights on building a new ballpark in Boston’s Fenway neighborhood.  Taylor’s father, General Charles H. Taylor, acquired land between Ipswich and Landsdowne Street at public auction, and ground was broken in September 1911 with the intention of playing the 1912 season – just seven months away – at the new venue.  Taylor sold half his club to James McAleer but stayed on to oversee construction and serve as landlord for the new park.  Constructed by the Charles Logue Building Company, sparkling new Fenway Park hosted an exhibition game between the Red Sox and Harvard College April 9, 1912.  Fond of their new home, the Red Sox went on to win 105 games, the American League pennant and a thrilling World Series over the New York Giants, giving the franchise its second world championship in its 12-year history.

After a fire destroyed much of the ballpark in January 1934, reconstruction efforts led to the opening of “new” Fenway Park for the start of the 1934 season.  A 37-foot high wall was constructed in left field, replacing “Duffy’s Cliff,” an embankment and fence that had stood in left since the park opened in 1912.  The wall was covered with advertisements, featured a hand-operated scoreboard [still in use today] at its base, and was topped by a net designed to prevent baseballs from breaking windows in the nearby shops of Kenmore Square.  Before the start of the 1940 season, bullpens were installed in front of the bleachers, moving the right field and right centerfield fences 23 feet closer to home plate.  The area came to be known as Williamsburg, as left-handed Sox slugger Ted Williams hit numerous home runs into the new bullpens.  The Green Monster was created in 1947 – the season that brought Fenway its first night game — when advertisements were removed from the left field wall and it was painted dark green.  Originally made of wood and later covered in hard plastic, the “Monstah” sits 310 feet from home plate.  It is the most famous outfield fence in baseball history.  Just beyond it stands the iconic Citgo Sign, a famous Boston landmark.

Thomas Yawkey purchased the Red Sox from J.A. Quinn in 1933.  A Yale grad, he inherited millions from his father, Bill Yawkey, who owned the Detroit Tigers until he died in 1919.  A clause in his father’s will prevented young Tom from taking control of the money until age 30.  On February 25, 1933 – just four days after celebrating his 30th birthday – Mr. Yawkey purchased the Red Sox.  He owned the BoSox for 44 years, longer than anyone else in baseball history, and won AL pennants in 1946, 1967, and 1975.  T.A. Yawkey never won a World Series and passed in July 1976.  His wife, Jean, took control of the team until her death in 1992.  In 1977, a section of Jersey Street, which runs alongside Fenway Park between Brookline Avenue and Boylston Street, was renamed Yawkey Way.

In 1975, an electronic scoreboard was erected behind the centerfield bleachers, while the press box was enlarged, enclosed, and air-conditioned.  Luxury boxes were added in the 1980s.  The revered ballpark has undergone many improvements since 2002, including the addition of 250 bar-style seats atop the Green Monster, additional rooftop seats in right field, open-air seats behind home plate, and a new high-definition video scoreboard above the right centerfield bleachers.  Fenway Park now seats 37,221 during day games and 37,673 at night [a tarp is used during afternoon games in centerfield to provide a dark back drop for batters].  The current Red Sox ownership group of John Henry, Tom Werner, and Larry Lucchino is committed to preserving and improving Fenway Park and has pledged to keep seating capacity under 40,000.

Fenway Park has hosted the World Series ten times, with Boston winning five of them.  In 1914, the Boston Braves used Fenway Park for the World Series, which they won.  Ironically, the Red Sox used Braves Field [which had a much greater seating capacity] for their own World Series in 1915 and 1916.  Besides the BoSox, Fenway has hosted the Cape Cod League All-Star Game, minor league baseball, and the championship rounds of the Baseball Beanpot Tournament, an annual event featuring four Boston–area colleges.  Vin Scully got his start there, calling a college football game from Fenway’s roof on a frigid mid-November day in 1949.  The venerable park has hosted the Boston [later Washington] Redskins, Boston Yanks, and the Patriots – who went on to enjoy unparalleled success 30 miles south in Foxboro.  Featured prominently in baseball movies Field of Dreams and Fever Pitch, America’s most beloved ballpark has also played host to NHL hockey, soccer matches and rock concerts, including performances by Bruce Springsteen, the Rolling Stones, Stevie Wonder, Tom Petty, and Boston’s own Aerosmith.

The second-smallest MLB ballpark in total seating capacity, Fenway is one of eight big league venues that accommodates fewer than 40,000 spectators.  Only woeful Tropicana Field in Tampa – with its fake grass, dim lighting and domed roof – is smaller, with a capacity of 31,042.  Despite holding just over 37,200 patrons, Fenway can be raucous.  But that has not always been the case.  Twice during the 1965 season the BoSox drew fewer than 500 fans.  Beginning with the “Impossible Dream” season of 1967, which created the Red Sox craze and Red Sox Nation of today, tickets at Fenway became hard to come by.  Between May 2003 and April 2013, the Sox sold out 794 regular season and 26 postseason games in a row.

The Fenway experience is spine-tingling.  The entire ballpark is green: the Monstah, playing field, supporting structures, and seats — except for one.  Fenway’s lone red seat is in right field [Section 42, Row 37, Seat 21], marking the longest home run ever hit in the ballpark.  In June 1946, the great Ted Williams, undeniably the greatest player in Red Sox history, clouted one 502 feet.  According to Hit Tracker Online, the ball, if unobstructed, would have flown 535 feet.  The stadium sound system blares such Beantown classics as Dream On, Dirty Water, and anything by longtime Fenway legends the Dropkick Murphys.  Since 1997, the crowd rises as one in the middle of the eighth inning and sings Neil Diamond’s Sweet Caroline, creating one of the most singularly unique experiences in American sports.  Outside of Bob Sheppard, Fenway Park has featured some of the greatest PA announcers in baseball.  For 26 years, Sherm Feller greeted patrons with, “Good afternoon, ladies and gentlemen, boys and girls.  Welcome to Fenway Park.”  The iconic Carl Beane handled public address duties for the BoSox from 2003 until his death in 2012.

The Red Sox have retired nine numbers in franchise history.  All are white numerals on a red circle and are displayed above the right field grandstand.  David Ortiz will have his Number 34 retired during the 2017 season.  Even the foul poles at Fenway are historic.   Pesky’s Pole sits 302 feet from home plate at the end of the right field line.  Named for Johnny Pesky, a contact hitter who had only 17 homers in ten big league seasons, several of Pesky’s dingers made their way around the right field foul pole and into the seats.  The Fisk Foul Pole sits along the left field line, atop the Green Monster.  Named after hall-of-fame catcher Carlton “Pudge” Fisk, who famously waved a home run fair in the bottom of the 12th inning to win Game 6 of the 1975 World Series.  Fisk’s walk-off blast, which ricocheted off the foul pole, is one of baseball’s most enduring moments.

The Boston Red Sox have won three World Series championships in this century: 2004, 2007 and 2013.  The 2013 title is the first the BoSox clinched at Fenway Park since Babe Ruth’s team accomplished the feat in 1918.  Walking tours of Fenway – one of baseball’s true gems – are offered at the top of the hour each day from 9 am to 5 pm and are available in English, Spanish, and Japanese.

On this date in 1912, Fenway Park officially opened, with the Red Sox defeating the New York Highlanders [renamed the Yankees the following year], 7-6, in 11 innings.  Newspaper coverage of the opening was overshadowed by the sinking of the Titanic just a few days prior.