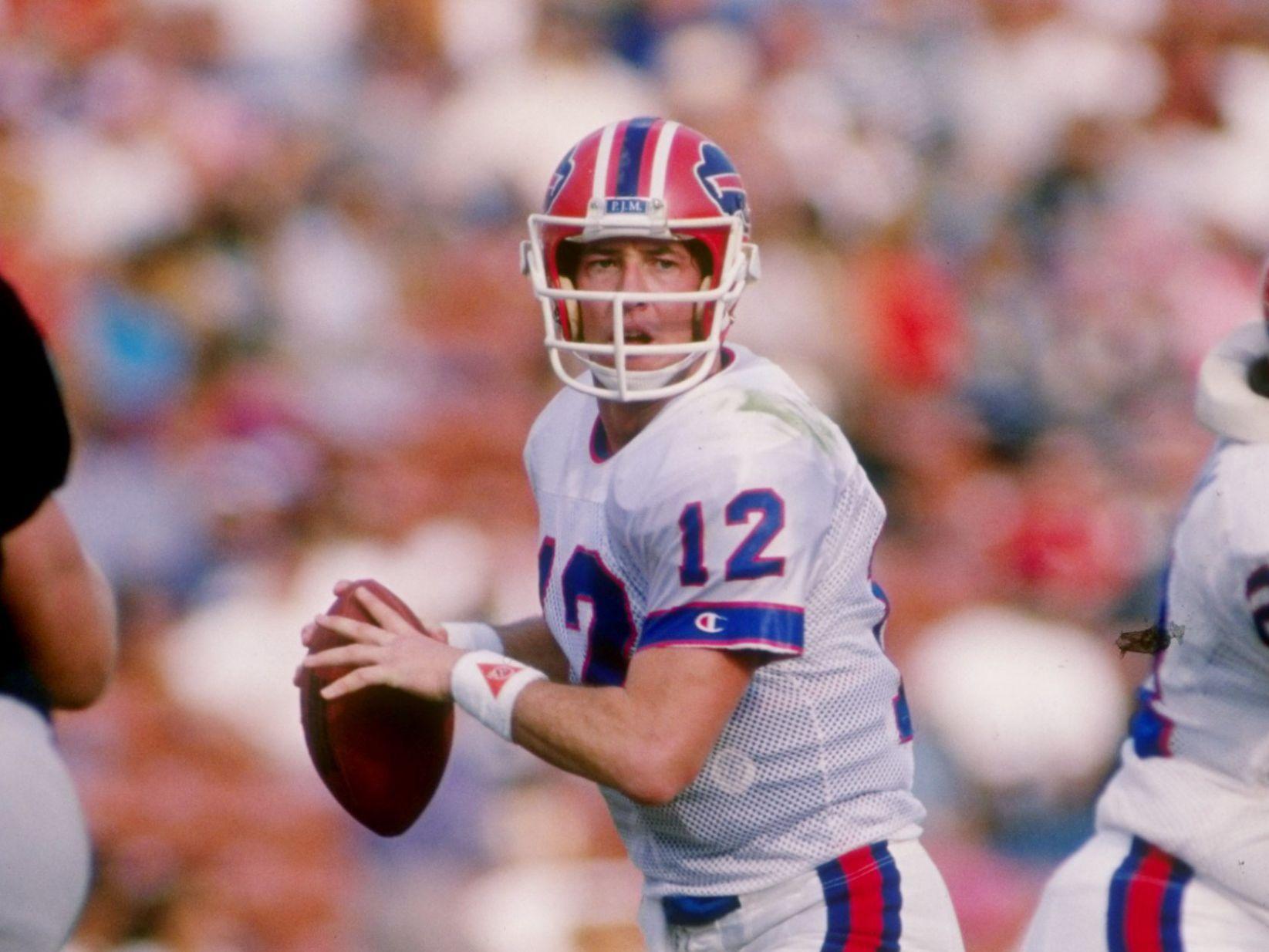 Jim Kelly is the only quarterback in history to lead his team to four consecutive Super Bowls.

Unquestionably one of the finest quarterbacks in football history, Kelly starred at every stop in his career.  A three-sport standout in high school, he was the first in a long line of great quarterbacks at the University of Miami.  In two seasons in the United States Football League, Kelly threw for 83 touchdowns and more than 9,800 yards.  At 26, he joined the Buffalo Bills, and led them to eight playoff appearances and four AFC championships in 11 seasons.  Kelly threw for 320 touchdowns and more than 45,000 yards as a pro.  One of the greatest players in USFL history, Kelly was Rookie of the Year and league MVP in 1984 after throwing 44 touchdown passes, and is a member of the USFL All-Time Team.  In his 11 seasons in Buffalo, Kelly threw for over 300 yards on 26 occasions and once passed for six touchdowns in a single game.  He twice led the NFL in passing and had eight 3,000-yard seasons.  Kelly passed for more than 35,000 yards during his NFL career, and only three players in league history reached the 30,000-yard mark faster.  The best quarterback in Buffalo Bills history was also the 500th player ever drafted by the franchise, which became one of the AFL’s charter organizations in 1960.

Born in Pittsburgh, Pennsylvania, on this date in 1960, James Edwards Kelly grew up in a family of six boys, all of whom played football.  He was raised in East Brady, a small town along the Allegheny River about 65 miles northeast of Pittsburgh.  Kelly was an avid Steelers fan and idolized quarterback Terry Bradshaw.  An excellent athlete, he made the national semifinals of the Punt, Pass & Kick competition and later played baseball, football and basketball at East Brady High School.  In hoops, the 6’3” Kelly scored over 1,000  points and had six 30-point games in his varsity career.  As a senior, he averaged 23 points and 20 rebounds a game to help the Bulldogs to the state semifinals.  A quarterback-linebacker who also handled kicking duties, Kelly threw for nearly 4,000 yards and 44 touchdowns to earn All-State honors as a senior.  Following the season, he played in the Big 33 game, the “Super Bowl of High School Football” that pits star players from eastern Pennsylvania against all-stars from the western half of the state.  Legendary Penn State coach Joe Paterno—who had already signed Todd Blackledge to play quarterback—recruited Kelly to play linebacker.  Wanting to remain a signal-caller, Kelly declined the offer from “Linebacker U” and accepted a scholarship to the University of Miami.  It would not be his last interaction with Penn State.

A few hours before the Penn State game in Kelly’s freshman year, Miami head coach Howard Schnellenberger informed Kelly that he was going to start.  “The first thing I did was throw up,” recalled Kelly, who proceeded throw for three touchdowns in a 26-10 upset win.  It marked the start of a hall-of-fame career as well as the turning point of the Miami program, as the ‘Canes would go on to win their first national championship four years later.  In 1980, Miami won nine games and defeated Virginia Tech in the Peach Bowl.  As a junior, Kelly guided the ‘Canes to a victory over top-ranked Penn State and a 37-15 shellacking of Notre Dame in the final game of the year to finish the season as the eighth-ranked team in the nation.  Kelly was in consideration for Heisman Trophy [Daily Dose, 12/6/16] in 1982 until a shoulder injury derailed his season.  He finished his career at “The U” with 5,233 yards and 32 touchdowns. Mr. Kelly was inducted into the university’s hall of fame in 1992.

Jim Kelly had tears in his eyes when the Buffalo Bills selected him with the 12th pick of the 1983 NFL Draft.  After four  years in Miami, the last place he wanted to go was western New York.  “I didn’t really literally cry.  I just had tears,” recalled Kelly.  “I’m like, ‘You got to be kidding me’.”  Rather than report to Buffalo, he opted to play for the Houston Gamblers of the USFL.  In two seasons leading coach Mouse Davis’s run-and-shoot offense, Kelly re-wrote the record books.  When the Gamblers folded, he went to Donald Trump’s New Jersey Generals, but the league collapsed before Kelly ever played a game with the Generals.

Jim Kelly joined the Buffalo Bills, who had retained his NFL rights, in 1986.  From 1988 to 1995, he led the Bills to a record four consecutive Super Bowl appearances and six divisional championships.  Highly cerebral and possessing an arm like a cannon, Kelly ran the “K-Gun”—a fast-paced offense named after Bills tight end Keith McKeller, whose nickname was “Killer.”  Lining up without first huddling, Kelly would call the play from the line of scrimmage, not allowing defenses to make substitutions.  The K-Gun created mismatches while tiring the defense, and was the most famous and complete hurry-up offense in football.  Kelly’s primary receiver was future hall-of-famer Andre Reed, with whom he connected for 65 touchdowns.  Only five quarterback-receiver tandems have combined for more career touchdowns.

“Kelly Tough” is a trait that runs in the family.  Jim never whined about losing the Super Bowl four straight years or about the injuries that necessitated major neck and back surgery after his playing days were over.  In 2005, he lost his son, Hunter, to a rare nervous system disease.  Hunter, who shared a birthday with his father, was born with Krabbe Disease in 1997 and given no more than three years to live.  He died at eight and, following his passing, Jim Kelly and his wife, Jill, established the Hunter’s Hope Foundation to raise funds for neurological disease research.  The guy who did not want to come to Buffalo is now the town’s unofficial ambassador.  A blue collar guy in a blue collar town, Kelly still lives in western New York and works in the Bills organization.  He is revered in Buffalo.  In 2013, Kelly announced he had cancer in his jaw.  Following reconstructive surgery and after undergoing chemotherapy, the cancer is in remission.

Six quarterbacks were taken in the first round of the 1983 NFL Draft.  Three of them—Dan Marino, John Elway and Jim Kelly–wound up in the Pro Football Hall of Fame.  Jim Kelly was the first of the trio to be enshrined.  After being elected in his first year of eligibility in 2002, former Bills coach Marv Levy presented him in Canton.   A five-time Pro Bowler—and 1990 Pro Bowl MVP–he retired in 1996 with the sixth-best passer rating in pro football history.  The Bills have had some fine quarterbacks during their five-and-a-half decades of existence.  Jack Kemp guided them to two consecutive AFL titles in the mid-1960s and Joe Ferguson led the NFL in touchdown passes in 1975.  James Edward Kelly—who played his entire NFL career in Buffalo and is a member of the Bills’ 50th Anniversary All-Time Team–is unquestionably the greatest quarterback in franchise history.  In 2001, the Bills retired James Edward Kelly’s number 12.

Happy 57th birthday to a first-ballot hall-of-famer and one of Buffalo’s favorite sons.

“I thrive on having everything put in my hands.  I love being the guy who has to get it done.  I’ve always been that way.” – Jim Kelly