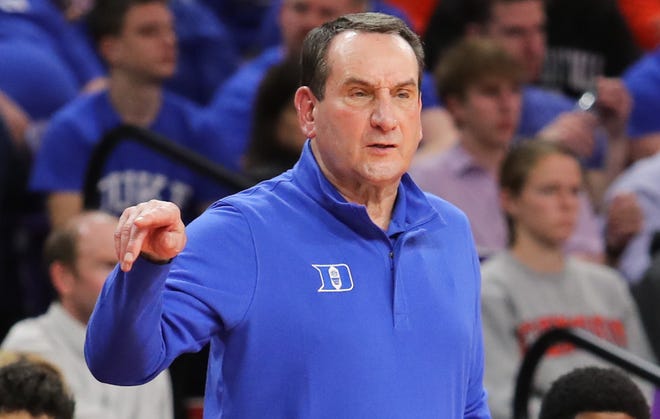 Mike Krzyzewski [sha-SHEF-skee] is the winningest coach in the history of men’s Division I college basketball.  In over four decades as a major college head coach, he has won five national championships—second only to John Wooden [Daily Dose, 10/14/15], who has ten.  A three-time Naismith Coach of the Year, Krzyzewski has more wins at one school than any men’s coach in history.  He has taken teams to more NCAA tournaments [32] and won more games [90] than any coach ever.  Coach K has guided Duke University to 12 Final Fours, a dozen ACC regular season titles, and 13 ACC Tournament championships.  He is 88-1 as coach of the U.S. men’s national basketball team and has led Team USA to six gold medals, including the last three Olympic tournaments.  Under Krzyzewski, Duke has gone to the postseason in 33 of 36 seasons–including 21 straight NCAA tournaments—and has played for the title seven times.  He has coached seven national players of the year, 31 All-Americans, and 32 first-round NBA picks [21 of them lottery selections].  In 36 seasons under Coach K, Duke has spent more than 100 weeks as the top-ranked team in the country, and the Blue Devils have spent more weeks at number one than they have unranked.  During that time, Krzyzewski has had 67 ACC All-Academic performers, including five from the 2015 squad, while six Duke players have been named Academic All-America.  Entering the 2016-17 season, Krzyzewski had a lifetime record of 1,043-321 in 41 seasons as a head coach.  He has more 30-win seasons [14] than any major college men’s coach.

Like legendary comedian Jack Benny [born Benjamin Kublesky] and Doors keyboardist/co-founder Ray Manzarek, Michael William Krzyzewski is a Chicagoan of Polish descent.   Born on the city’s northwest side on this date in 1947, he attended Archbishop Weber High School, an all-boys Catholic prep school that closed its doors in 1999 due to financial hardship.  After leading Chicago’s Catholic League in scoring as a senior, he enrolled at the United States Military Academy, where 24-year-old Bob Knight [Daily Dose, 10/25/16] had recruited him as a point guard after having become the youngest head coach in college basketball history.  As a senior, Krzyzewski captained the Black Knights to a semifinal loss to Boston College in Madison Square Garden [Daily Dose, 12/15/15] in the 1969 NIT.  Later that night, Krzyzewski’s father suffered a massive brain hemorrhage and died before Mike could get home to Chicago.  Knight dropped everything, followed his point guard home, and stayed at the Krzyzewski’s house for three days consoling the family.

Following his five-year stint in the Army—where he reached the rank of captain–Krzyzewski joined Knight’s staff at Indiana [Daily Dose, 3/31/16] in 1974 as a graduate assistant, helping the Hoosiers to a 31-1 record and Big Ten title.  The following year, Krzyzewski took over as head coach of his alma mater, inheriting a team that had gone 3-22 the previous season.  Preaching defense and running a motion offense that produced high-percentage shots, Krzyzewski led Army to 19 and 20-win seasons and two NIT appearances.  Following the 1979-80 season, Bill Foster resigned as head basketball coach at Duke to accept the same position at South Carolina [can you imagine leaving Duke for the South Carolina job today?]  In early 1980, Knight got a call from Tom Butters, athletic director at Duke, wanting to float a few candidates for his school’s vacant head coaching position.  Knight recommended Krzyzewski, explaining that he was a superb defensive coach and that, coming from West Point, he would understand Duke’s academic mission.  In March–without offering the job to anyone else, Butters shocked fans by tapping the unknown cadet as Duke’s coach, calling him “The brightest young coaching talent in America.”

In his second and third season, the now-winningest coach in men’s college basketball history went a combined 21-34.  In his fourth year in Durham, he led the Blue Devils to the 1984 NCAA tournament, where they reached the round of 32.  The program took off in 1986, when Coach K won his first ACC title and led Duke to the NCAA Final.  The Blue Devils returned to the title game in 1990, then won their first of back-to-back national championships in 1991.  After failing to qualify for the Big Dance [Daily Dose, 12/27/16] in 1995, Krzyzewski has led Duke to 21 straight NCAA tournaments.  Under Coach K, Duke is synonymous with winning seasons and a superb graduation rate.  From 1986 to 2016, every Duke class but four played in at least one Final Four, with 66 players competing in at least one championship game.  Krzyzewski emphasizes the team as family, and the family tree has grown, with 20 former players coaching at the collegiate or pro level.  This season, the Blue Devils staff is comprised entirely of former Duke players.

At his hall of fame induction speech in 2001, Krzyzewski shared his success with those who helped along the way.  “I hope that all of the youngsters who have played for me and the people who have worked with me will share in this honor.  My mom always told me to associate myself with great people and great institutions.  I’ve tried to do that at the United States Military Academy and at Duke University.”  In January 2015, Coach K won his 1,000th career game, a 77-68  victory over St. Johns at Madison Square Garden to become the first men’s coach in history to reach that milestone.  “There will be others that win more, but it is kind of neat to be the first one to 1,000,” said Krzyzewski after the game.  “It’s not just the number of wins, but the quality of opponents we’ve had.”  Now in his 42nd year of coaching—and 37th at Duke—Krzyzewski is within reach of the immortal Pat Summitt [Daily Dose, 11/13/15], whose 1,098 career wins are the most in major college basketball history—men or women.

Mike Krzyzewski credits Bob Knight for having a tremendous influence on him as a player, coach and person.  He was the General’s floor leader at Army, assisted him for one season at Indiana and—like his mentor—earned his first head coaching position at West Point.  In 1979, he gained international coaching experience as Knight’s assistant at the 1979 Pan Am Games.  After becoming head coach at Duke, teacher and pupil have twice met in the NCAA tournament.  In 1987, the Hoosiers beat Duke in the Sweet 16 en route to winning the championship.  The Blue Devils got revenge five years later, beating IU in the Final Four before claiming the 1992 NCAA title.  Following the tournament, misunderstandings strained the relationship between Krzyzewski and Knight.  In 2001, Coach K was voted into the Naismith Hall of Fame.  Seeking a hall of fame member to present him for induction, Krzyzewski chose Knight.  “He’s the only one,” Krzyzewski told his wife, Mickie, after several days of deliberation.  At the induction ceremony in Springfield,  Knight’s voice quavered as he brought Coach K to the stage, calling him “the best coach that I’ve had a team play against” before the two embraced.  Ten years later, the two embraced again, as Krzyzewski won his 903rd career game to pass his former mentor as winningest coach in D-I men’s basketball history.  In Madison Square Garden November 15, 2011—on the same floor that both had shared in the 1969 NIT semifinal while at Army—Knight was on hand broadcasting the game for ESPN.  “I know a lot of people don’t tell you this, Coach,” said a teary Krzyzewski. “But I love you.”  To which Knight responded, “Boy, you’ve done pretty good for a kid who couldn’t shoot.”

In addition to the Naismith Hall of Fame, Krzyzewski has been inducted into the Army Sports [2009], Chicagoland Sports [2010] and Duke Athletics [2011] halls of fame.  In 2011, he and Pat Summitt were honored as Sports Illustrated’s Co-Sportsperson of the Year.