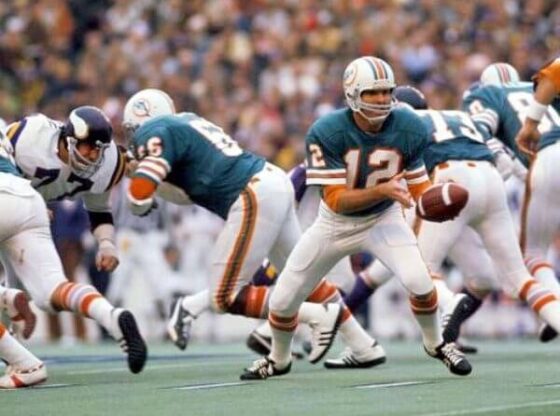 In June 1965, the NFL awarded an expansion franchise to Atlanta, thwarting the attempt of AFL Commissioner Joe Foss for his upstart league to place a team in Dixie.  Foss then convinced attorney Joe Robbie, who wanted an AFL franchise for Philadelphia, to consider Miami, believing southern Florida’s warm weather and growing population would be a better fit.  Robbie accepted, partnered with actor-comedian Danny Thomas, and paid $ 7.5 million for an expansion franchise to begin play in the 1966 season.

The region had not had a professional sports team since the Miami Seahawks, who played in the All-America Football Conference in 1945 before bolting for Baltimore and becoming the Colts.  A deal was struck with the Orange Bowl, a 70,000-seat venue west of downtown and home of the NCAA Miami Hurricanes, to host the team.  The franchise received nearly 20,000 entries in a “Name the Team” contest and over a thousand names were suggested, including Mariners, Missiles, Marauders and Moons.  A dozen finalists were delivered to a seven-member panel of local media to choose the winner.  Mrs. Robert Swanson of West Miami was one of 622 entrants who submitted Dolphins – the team name chosen by the panel – and won a tie-breaker to earn two lifetime passes to Dolphin home games.  “The dolphin is one of the fastest and smartest creatures of the sea,” said Robbie in announcing the team name in October 1965.  “Sailors say bad luck will come to anyone who harms one.”

George Wilson was hired as the first head coach in franchise history and went 15-39-2 in his first four seasons.  In February 1970, the Dolphins made the most important transaction in team history, hiring Don Shula.  A Paul Brown disciple who had been lured from the Colts after seven years in Baltimore [where he had gone 71-23-4, including an NFL title 1968] Shula had been given his first NFL coaching job when Wilson hired him as defensive coordinator of the Detroit Lions in 1960.  Ten years later, he replaced his mentor in South Beach.

The Miami Dolphins have a rich and storied history.  In just their fifth year of existence – and first season under Shula – they went 10-4 and made the playoffs.  The following season, they reached the first of three straight Super Bowls.  The Dolphins and Buffalo Bills [who made four in a row in the early 1990s] remain the only franchise to accomplish that feat.  Miami has played in two of the most epic  games in playoff history.  On Christmas Day 1971, Garo Yepremian booted a 37-yard field goal to beat the Kansas City Chiefs and end pro football’s longest game.  In 1982,  Rolf Benirschke converted a 29-yard field goal nearly 14 minutes into overtime to lead the San Diego Chargers over the Dolphins in the “Epic in Miami.”  The Dolphins have also been involved in several famous streaks.  In 1972,  they reeled off 17 wins in a row to complete the NFL’s only perfect season.  On a Monday night 13 years later, the Dolphins handed the Chicago Bears their only loss of the 1985 season [Chicago would finish 16-1 and win Super Bowl XX] to protect their legacy.  In 1970, Miami embarked upon a 20-game winning streak against the Buffalo Bills.  The Bills were “oh-for-the-70s” against Miami, a feat unmatched in the annals of the NFL.

More than four decades after achieving perfection, the 1972 Miami Dolphins are still the standard of excellence in the National Football League.  The Fins have won five AFC championships, 13 Division titles and made 23 playoff appearances.   Miami has produced ten Rookie-of-the-Year recipients and two Super Bowl MVPs [Jake Scott in 1972 and Larry Csonka in 1973].  A three-time Coach of the Year and 1993 Sports Illustrated “Sportsman of the Year,” Shula is a member of the Pro Football Hall of Fame.  Nine Dolphin players are in the Hall of Fame.  Eight of them, including Paul Warfield, Larry Csonka, Jim Langer, Bob Griese, Larry Little, Dwight Stevenson, Nick Buoniconti and Dan Marino played for Shula.  Only Jason Taylor, who played defensive end in Miami from 1997 to 2011, did not.

The only member of the AFC East that is not a charter member of the AFL, the Dolphins made the Orange Bowl their home for two decades.  Playing in what many believed was a college football town, the team averaged a respectable 25,551 fans per game in their inaugural 1966 season.  In 1987, they moved to Joe Robbie Stadium.  Located 15 miles north of downtown in Miami Gardens, the 65,000-seat venue has gone through a variety name changes, including Pro Player Park, Land Shark Stadium and Sun Life Stadium.  Now Hard Rock Stadium, the newly remodeled park has hosted five Super Bowls, two World Series and four BCS National Championship Games.

From their inaugural season until 2012, Miami had one of the most iconic logos in pro football – an aqua dolphin sporting a football helmet, sans facemask, leaping into an orange sunburst background.  Like so many college and pro teams today, the franchise abandoned tradition and introduced a sleeker, more “stylized” version in 2013.  Gone is the helmet featuring an “M” for Miami, and the animal seems to be swimming rather than leaping.  Beginning in the inaugural season and continuing through the 1970s, Flipper — a live bottlenose dolphin — was situated in a water tank in the east end of the Orange Bowl.  Flipper would become the basis for the fictional dolphin, “Snowflake,” in the 1994 film Ace Ventura: Pet Detective.  From 1966 to 2000, Denny Sym cheered on the Dolphins as a one-man sideline show.  Adorned in his glittering coral and aqua hat, “Dolfan Denny” led the crowd in cheers and chants in the Orange Bowl and, later, Joe Robbie Stadium for 33 seasons.

The Aqua and Orange have gone 439-341-4 in their 51 years of existence.  With two NFL titles, the Fins are 20-21 in the playoffs.  A dozen coaches have led the franchise over the past five decades.  Shula is the winningest, having gone 257-133-2 with 12 division titles in 26 seasons in South Beach.  With 329 overall wins, he is also the winningest coach in pro football history.  Nick Saban had a losing record in his two seasons in Miami.  Mr. Saban found greener pastures at Alabama, where he has guided the Crimson Tide to four national championships in ten seasons in Tuscaloosa.  Jimmy Johnson, who led the Miami Hurricanes to the 1987 NCAA title before leading the Dallas Cowboys to back-to-back Super Bowl victories, also coached the Dolphins.  Between 1996 and 1999, Coach Johnson went 36-28.  His tenure ended abruptly with a 62-7 loss to Jacksonville in the 1999 divisional playoffs.  The Dolphins are currently led by 39-year-old Adam Gase, who went 10-6 in 2016, his first season in Miami.

Miami has officially retired three numbers in franchise history: Number 12 for Bob Griese, Number 13 for Dan Marino, and Number 39 for Larry Csonka.  Two others, Number 54 for Zack Thomas and Number 99 for Jason Taylor, are currently in “reduced circulation.”  Marino is the only Dolphin to be named NFL MVP [1984].  He is also the franchise’s only player to be named Offensive Player of the Year, while three Fins [Dick Anderson, Doug Betters, Jason Taylor] have earned NFL Defensive Player of the Year honors.

On this date in 1965, the AFL awarded its ninth franchise to Miami.