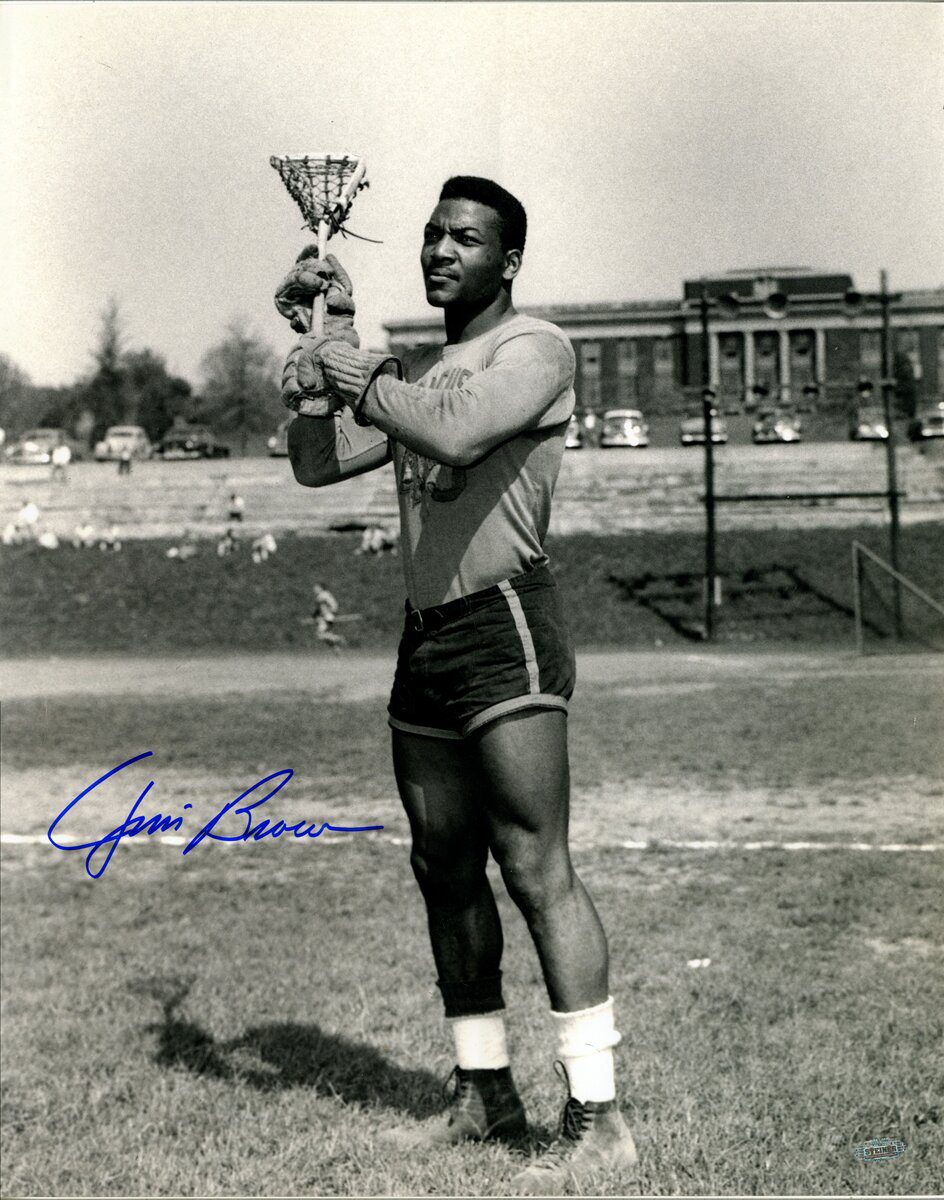 It is rare to be considered the greatest of all time in any one activity. To be the best-ever at two different sports is unfathomable. James Nathaniel Brown is, arguably, the greatest athlete in American history. Born in St. Simons Island—a racially segregated community about four miles off the coast of southern Georgia—on February 17, 1936, Brown was the only child of Swinton “Sweet Sue” Brown, a professional boxer, and Theresa, a homemaker. Swinton abandoned the family shortly after Jim was born and Theresa moved to New York when young James was two years old to find work as a housekeeper. Brown was raised by his great-grandmother until she died when Jim was eight and he rejoined his mother in Manhasset, New York—an affluent community on the north shore of Long Island—to begin second grade at Manhasset Valley grade school. The two lived in a room above the garage of the home in which Theresa worked and the youngster immediately distinguished himself in athletics. As a ninth-grader at Manhasset High School, Brown was invited to join the football team by Ed Walsh, the coach who would go on to become Brown’s “father figure”. Brown earned 13 varsity letters in five sports at Manhasset. He pitched two no-hitters in baseball, was voted to three All-State teams in lacrosse, dominated in track & field and won the Thorp Award as the best football player in Nassau County after averaging 14.9 yards per carry in his senior year. In basketball, Brown averaged 39.6 points per game, a Long Island record that was later broken by future Boston Red Sox Hall of Famer, Carl Yastrzemski, of Bridgehampton. The “Man from Manhasset” was offered football scholarships from 45 colleges, but Syracuse University was not one of them. Ken Malloy, a Syracuse alum and family friend, canvassed Manhasset businessmen for funds to pay for Brown’s freshman year until he could earn a football scholarship, Brown enrolled at Syracuse in the fall of 1953. Brown continued to play multiple sports at Syracuse, where he was a two-way starter and place-kicker on the football team for three seasons, led the basketball team in scoring as a sophomore and competed in lacrosse and track. In 1954, he placed fifth in decathlon at a National AAU meet and had a senior year that may never be matched. In the fall of 1956, “The Legend” led the Orangemen football team in rushing and scoring, finished fifth in Heisman Trophy voting and was named first team All-American. In his final regular season game, Brown rushed for 197 yards, scored six touchdowns and kicked 7 PATs to score 43 points—a record that stood for 40 years. That spring, he led the nation in scoring, tallying 43 goals with 21 assists, while guiding Syracuse’s lacrosse team to a 10-0 record in route to being named All-American. In May, Brown took first place in the high jump and javelin and finished second in the discus throw to collect 13 points and help the Orangemen beat Colgate in a dual track meet, then headed across campus to help the lacrosse team beat arch-rival Army for the first time in 18 years. A few days later, “JB” scored five goals in one half while competing in the Collegiate North-South All-Star Game. In all, Mr. Brown earned 10 varsity letters at S.U. and was named 1956-57 Athlete of the Year. He graduated with a bachelor’s degree in 1957. The Cleveland Browns selected “First Down Brown” with the sixth pick of the 1957 NFL Draft—between Purdue’s Len Dawson and Clarence Peaks of Michigan State. Brown dominated immediately, rushing for 942 yards and nine touchdowns in route to earning Rookie of the Year and MVP honors, the first player to win those two honors in the same year in the history of the league. The following year, he gained 1,527 yards to break the NFL single-season record and ran for over 1,200 yards in each of the next three seasons. Brown broke his own single-season record when he gained 1,863 yards—more than one mile–in 1963 and Cleveland won the NFL championship–the last time the Browns won the title and the only of Jim Brown’s pro career. His final season was 1965, a year in which Brown rushed for 1,544 yards, scored 17 touchdowns and was named MVP for the third time in nine years. He played in his ninth Pro Bowl and was named game MVP- the third time he earned that honor. The National Football League played a different game in the 1950s and 60’s than the style played today. Offenses ran first and passed second. Teams played a 12 game schedule until 1961, when they expanded to 14 regular season contests. Blockers were not allowed to extend their arms or put their hands on defensive players. The hash marks were much closer to the sidelines, creating a “wide side” of the field that defenders would favor. When Jim Brown entered the NFL, only five players in league history had ever rushed for 1,000 or more yards in a single season. Brown ran for over 1,000 yards in seven of the nine seasons he played, finishing with 943 and 996 yards in two others. In the 80 year history of the NFL, no back has led the league in rushing more than four times yet JB did it in eight times in nine years. He averaged 5.2 yards per carry and 104 yards per game. Jim Brown scored 126 touchdowns and ran for 12, 312 yards in only 118 NFL games- while Walter Payton [Daily Dose, October 7] played in 190 games and Emmitt Smith in 226. The 6’2”, 230 fullback had an 18-inch neck, 32-inch waist and combined power with speed like no player in history. He never missed a game, was named MVP of the league three times and retired at age 29 to pursue acting. Jim Brown was named to the 1960s All-Decade Team as well as the 50th and 75th Anniversary All-Time teams. He is a member of three Halls of Fame—Pro Football [1971], Lacrosse [1983] and College Football [1995]—the only man in history ever to be elected to all three. In 2002, The Sporting News selected him as the greatest football player of all time. Brown has not played a game in over 50 years yet still holds 11 NFL records. On this date in 1963, Jim Brown became the NFL’s all-time rushing leader when he passed Joe “The Jet” Perry’s record of 8,378 career yards in a week-six win over the Philadelphia Eagles before 75,174 fans in Cleveland’s Municipal Stadium.

“When running backs get in a room together, they don’t argue about who was best.”– Jim Brown