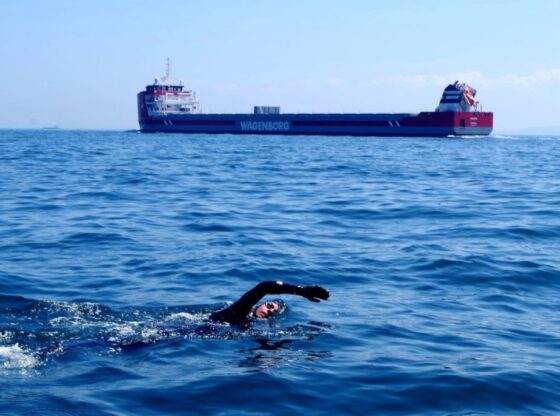 Marathon swimming is not for the faint of heart.  Cold water causes muscles to cramp, internal organs to shut down, and can lead to hypothermia.  Sea creatures and shipping vessels pose threats.  Strong currents and changing tides cause fatigue and can lead a swimmer off course.  Accompanied by a single support boat and crew, marathon swimmers toil in dark solitude for hours on end.  Wetsuits are not allowed, and staying hydrated and nourished while adrift in five-foot swells is difficult.

Known as The Sleeve, the English Channel separates southern England from northern France, and links the southern part of the North Sea to the Atlantic Ocean.  It is the busiest shipping area in the world.  The English Channel varies in width from 150 miles to just under 21 miles – in the Strait of Dover.  On a clear day, it is possible to see the majestic White Cliffs of Dover from the French coastline with the naked eye.

Captain Matthew Webb was the first to swim across the English Channel, in 1875.  He swam the 21 miles from Clover to Calais in less than 22 hours.  In 1926, 19-year-old Gertrude Ederle became the first woman to cross.  Wearing motorcycle googles to protect her eyes from salty water, Ederle completed her swim in 14 hours, 34 minutes.  Winner of three freestyle medals at the 1924 Paris Olympics and holder of five world records, the Queen of the Waves was greeted with a ticker-tape parade in Manhattan upon her return to the U.S.

The trip from mainland California to Catalina Island takes one hour by ferryboat.  Located 22 miles south-southwest of Los Angeles, Catalina Island is a rocky land mass in the Gulf of Santa Catalina.  In January 1927, chewing gum magnate William Wrigley Jr. offered a $25,000 prize to  anyone who could swim the Catalina Channel.  Of the 102 contestants who tried, only George Young – a 17-year-old Canadian – finished.  Young won the $ 25,000 with a crossing time of 15 hours, 44 minutes.

The first authenticated circumnavigation of Manhattan Island was done by 18-year-old Robert Dowling Jr.  On September 5, 1915, the future Naval officer completed the 28.5-mile loop around New York City in 13 hours, 45 minutes.  To take advantage of currents, the course runs counterclockwise around the island, which is roughly 13 miles long from top to bottom.  Starting on the Harlem River, swimmers move north before circling the northern tip of Manhattan.  A left turn into the Hudson takes them south, where they complete the loop in the East River.

The oldest person to complete the Triple Crown is James Clifford, who conquered the English Channel and Manhattan Island swims at 62.  One year later, he successfully crossed Catalina.  Charlotte Samuels in the youngest Triple Crown member.  The 16-year-old American completed the feat in 2014, earning her the Marathon Swimmer’s Federation Barra Award as year’s most prolific swimmer.

Rendy Lynn Opdycke holds two Triple Crown distinctions.  In 2008, the Washington native achieved the quickest turnaround, completing the trifecta in only 35 days.  Additionally, the 25-year-old Opdycke completed her three swims in 27 hours, 8 minutes: faster than any swimmer – male or female – in history.

The International Marathon Swimming Hall of Fame issues certificates of merit to athletes who successfully complete the trifecta.  The hall also maintains a record of each swimmer’s achievements in its archives.

Athletes who complete two swims each of the English Channel, Catalina Channel and Manhattan Island loop achieve marathon swimming’s Holy Grail.  The Double Triple Crown is the sport’s rarest achievement, and has been accomplished by only four swimmers.  Antonio Arguelles of Mexico was the first to achieve the feat, in 1999.  A decade later, the 50-year-old Stanford graduate completed the double-triple.  Other DTC swimmers include Tina Neill [U.S., 2008/2012], Penny Palfrey [Australia, 2010/2015] and Elizabeth Fry [U.S., 2009/2016].

Despite the threat of sea sickness, hypothermia, sharks, and wind chop – just to name a few – marathon swimmers continue their quest to complete the sport’s Triple Crown.  After setting the 19-and-under age group record at the 1998 Hawaii Ironman Triathlon, Joe Zemaitis opened a swim school in Phoenix.  In 2006, Zemaitis coached seven-year-old Braxton Bilbrey to become the youngest ever to swim from Alcatraz to San Francisco.  Eleven years later, Zemaitis became a Triple Crowner with a 12 hour, 23 minute crossing of the English Channel.

In 2017, Australian attorney Lynton Mortensen became the 168th person to complete the Triple Crown of Open Water Swimming.  On June 30, he completed a crossing of the English Channel.  Less than two months later, he finished third in the 20 Bridges Manhattan Island Swim [the official race of the Manhattan Island Marathon].  On September 30, 2017 – less than three months after embarking upon his quest – Mortensen became the most recent member of the Triple Crown Club when covered the Catalina Channel in 13 hours, 59 minutes.

“We all have a channel to cross: for some, that is the English Channel.  For others, it is 30 minutes of daily exercise.  And for some, it is not to quit school.” – Antonio Arguelles