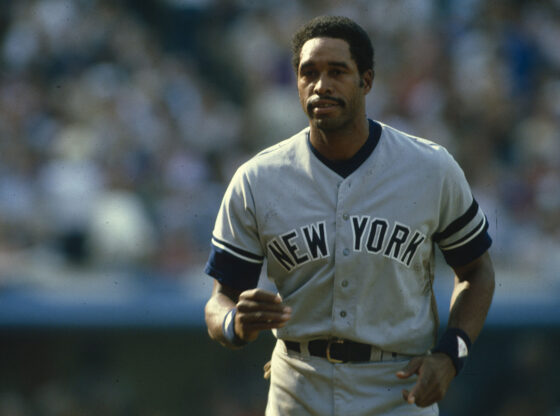 This is not a list of the greatest players of all time, although many have been great players.  Rather, this is a list of the best athletes who ever lived, and all excelled in more than one specialty.

In 1973, Winfield was MVP of the College World Series and was named All-America as a pitcher.  After helping Minnesota to the 1972 Big Ten basketball title, the 6’6” forward was selected by both the NBA Atlanta Hawks and ABA Utah Jazz.  He was also taken by the Minnesota Vikings in the 1973 NFL draft.  Winfield chose baseball, where he earned seven Gold Gloves and played in a dozen All-Star Games as an outfielder.  In 2004, ESPN named Dave Winfield the third best all-around athlete of all time.

By definition, triathletes are multi-sport performers.  None have been better than Mark Allen.

An All-American swimmer at UC-San Diego, Allen holds the record for the fastest-ever marathon split in the Ironman World Championship, when he blazed a 2:40 to outduel Dave Scott in the 1989 “Ironwar” at Kona.  A six-time Ironman champion, The Grip won 20 straight triathlons from 1988 to 1990.  Outside magazine dubbed him “The World’s Fittest Man” and ESPN ranked Allen the “Greatest Endurance Athlete of All Time.”

Rafer Johnson was a two-time Olympian in decathlon.

He also played basketball for John Wooden at UCLA.  Johnson won Olympic gold at the 1960 Games in Rome, when winning the decathlon really meant you were the world’s greatest athlete.  After averaging nine yards per carry in high school, UCLA offered him a football scholarship.  With his eyes on the decathlon, Johnson turned it down, then set a decathlon world record as a Bruin freshman.

From 1962 to 1966, Dave DeBusschere spent his summers playing professional baseball for the Chicago White Sox.

During the winter, he played forward for the New York Knicks.  A 6’6” right-hander, DeBusschere had a 2.90 ERA before the demands of the NBA forced him to give up baseball.  An eight-time All-Star, he was named one of the Greatest 50 Players in NBA history, in 1996.  One of 13 athletes to have played MLB and NBA, DeBusschere was also a basketball executive.  As commissioner of the ABA, he helped bring about the merger in 1976.  As director of basketball operations for the Knicks, Big D drafted Patrick Ewing.

Deion Sanders was one of the best shutdown corners in NFL history and one of the most dangerous kick returners ever to play.

Possessing blinding speed and superb ball skills, he was also an occasional offensive weapon.  A quality MLB outfielder who helped the Braves and Reds get to the postseason, Prime Time is the only athlete to appear in a Super Bowl [1994, ‘95] and World Series [1992].  A member of both the college and pro football halls of fame, Sanders also ran track at Florida State and is a member of the Florida High School All Century football team.

So do his dozen home run titles and .690 slugging percentage.  Ruth’s seven World Series crowns define him as a winner.  But what gets overlooked is Babe as a pitcher.  He won the most games of any left-hander in baseball from 1915 to 1917 and led the league in shutouts and ERA in 1916.  The Bambino had two 20-win seasons and is a Hall of Famer as both pitcher and outfielder.  While he didn’t look the part, Ruth was a superb athlete.  Babe didn’t invent the home run, he merely perfected it.  He single-handedly laid baseball’s “Dead Ball” era to rest and introduced the long ball, making the Sultan of Swat the most important figure in the sport’s history.

The greatest female athlete of all time is Babe Didrikson-Zaharias.

A standout basketball player, she won two golds and a silver in track at the 1932 Olympics.  Babe was a champion golfer who earned 82 amateur and professional victories, including 10 LPGA major championships.  Didrikson also holds the record for the farthest baseball thrown by a woman, at 296 feet.

Jackie Roosevelt Robinson is the only athlete ever to letter in four sports at UCLA, excelling in track, football, basketball and baseball.

In fact, baseball was considered his worst sport.  In 1939, Robinson led the nation in rushing yards per carry.  Two years later, he ran circles around the Chicago Bears while playing for the College All-Stars against the NFL champs.  A point guard who twice led the Pac-8 in scoring, the future Baseball Hall of Famer was the 1940 NCAA long-jump champion.

A strong argument can be made that Wilton Norman Chamberlain is the greatest basketball player in history.

And an even more powerful one is that Wilt is one of the best athletes of all time.  Training with Arnold Schwarzenegger, he once bench-pressed 500 pounds.  A dominant volleyball player, he played professionally and landed in the IVA Hall of Fame.  Chamberlain was a track star.  At Kansas, he was Big-8 high jump champion and was undefeated in the shot put.  The Big Dipper ran a 49-second quarter-mile, broke two minutes in the half mile, and triple-jumped over 45 feet.  And he was also a pretty fair basketball player, setting 72 NBA records that still stand.

He never played a full season of NFL football.  He never rushed for more than 1,000 yards.  He topped 30 homers only once in his career and appeared in only one All-Star Game.  But if you ever saw Bo Jackson, you know he was special.

His NFL career ended after only four seasons because of a hip injury and he retired from baseball less than four years later.  But from winning the 1985 Heisman to bowling over Boz at the goal line, or from running up the outfield wall to snapping a bat over his knee, Bo was one of a kind: an athletic superman.

At 6’1” and 180 pounds, he was a bruiser who led Carlisle to the national college football championship in 1912.  A two-time football All-American, Thorpe easily won gold medals in pentathlon and decathlon at the 1912 Olympics, setting a points record that stood for nearly two decades.  Voted the Greatest Athlete of the 20th Century in a 1999 poll, Thorpe starred in track, basketball and lacrosse.  He played pro baseball and pro football, dabbled in wrestling, and even won a ballroom dancing contest in college.

He played basketball and ran track at Syracuse, where he was an All-American in both football and lacrosse.  In 1957, he was the best collegiate lacrosse and football player in America.  The greatest running back in pro football history, Brown led the league in rushing in eight of his nine NFL seasons.  He retired as pro football’s all-time rushing leader and still has the highest yards-per-game [104.3] and yards-per-carry [5.2] averages in history.  The great Jim Brown is the only athlete in the college football, pro football and lacrosse halls of fame.