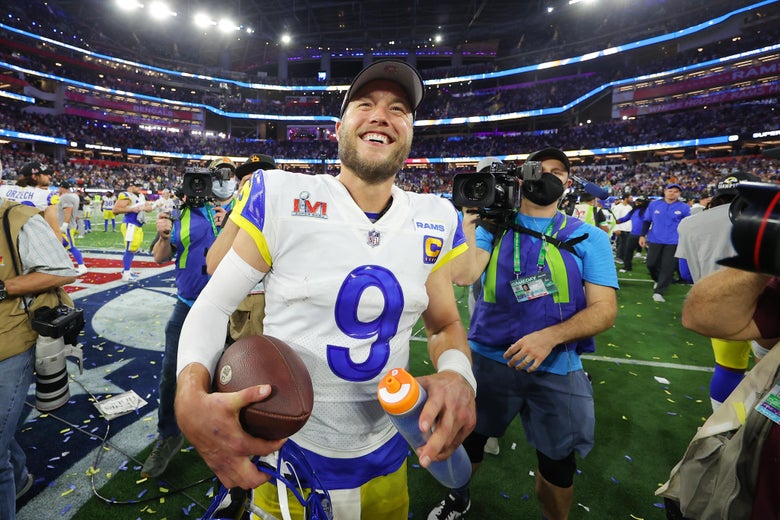 Listed as the top-rated quarterback prospect in the nation after being named 2005 High School Player of the Year, Stafford attended the University of Georgia, where he became the first true freshman quarterback to start for the Bulldogs since Quincy Carter in 1998.  After making the SEC All-Freshman Team in his first season in Athens, he threw for a school-record 25 touchdown passes en route to being named All-American his junior year.  In 2008, he opted to leave UGA early and enter the NFL draft, where the Detroit Lions made him the number one overall pick.  With a big arm, quick mind and strong leadership skills, Stafford has enjoyed rapid success in the NFL, reaching the 15,000, 20,000, 25,000 and 30,000 passing-yard plateaus faster than any signal-caller in league history.  After eight seasons as a pro, Stafford holds 18 NFL passing records along with over 30 Lions franchise marks.

Born in Tampa, Florida, on this date in 1988, Matthew John Stafford is the eldest of five siblings.  The family lived in Dunwoody, Georgia, while his father attended graduate school at UGA and later moved to Texas.  At two, young Matthew could dribble a basketball.  At four, while watching an NFL game on television with his father, he explained to his dad that a sweep failed because the tackle did not pull!  Seconds later, John Madden made the same comment to a national TV audience while diagramming the miscue on a telestrator.  Following John Stafford’s graduation from Georgia, the family moved to the University Park neighborhood of north Dallas, where Matthew befriended future Los Angeles Dodgers pitcher Clayton Kershaw.  The boys, who were the same age, enjoyed parallel success.  At six, they played together on a youth soccer team.  At 12, John Stafford coached them in Little League.  Matthew played catcher while Clayton pitched.  Later, Safford and Kershaw attended Highland Park High School—alma mater of the great Bobby Layne, who quarterbacked the Detroit Lions to three NFL titles in the 1950s—at the same time.

Highland Park High is a coeducational public high school with 2,000 students. Nestled in a leafy neighborhood in the shadows of Southern Methodist University, Highland Park is an athletics powerhouse.  In 2005, Sports Illustrated listed the Fighting Scots sports program as the best in the United States.  Highland Park has won state titles in 11 different sports, including the 2016 Texas 5A football championship.  In all, the Fighting Scots have claimed 77 state championships, most in the history of Texas high school athletics.  Playing in what is, arguably, the most competitive high school football league in America, HPHS has one of the top-tier programs in Texas.  With superb facilities and excellent coaching, the Scots could probably beat many college teams.  The winningest program in Texas high school football history, Highland Park draws big crowds that arrive with huge expectations.

While most middle school quarterbacks are trying to master completing a forward pass, Matthew Stafford was running a spread offense as a seventh grader.  He arrived at Highland Park well prepared.  As a freshman, college recruiters told his football coach that Stafford was already good enough to play at the Division I level.  Stafford became the starter in his sophomore year.  As a senior, he led Highland Park to a 15-0 record, including a 59-0 trouncing of Marshall before 32,000 fans in the state title game.  Despite missing the first three games of the season with a knee injury, Stafford threw for over 4,000 yards and 38 touchdowns.  Stafford was named 2005 High School Player of the Year and was rated a five-star [sure-fire pro] recruit.  Meanwhile, Clayton Kershaw went 13-0 with a 0.77 ERA for the Scots baseball team.  In one five-inning mercy rule game, Kershaw struck out all 15 batters he faced.  In 2006, the best quarterback and best pitcher in America—who had played freshman football and two years of varsity baseball together–graduated in the same high school class.  What are the odds of that?

Stafford graduated from high school early and enrolled at the University of Georgia for what would have been the second semester of his senior year of high school.  The early enrollment allowed him to participate in 2006 spring practice.  Before he had started a game at the college level, draft analyst Mel Kiper Jr. predicted, correctly, that Matthew Stafford would eventually become the first pick in the NFL Draft.  He emerged as the starter midway through his freshman year, leading the Bulldogs to upset wins over Auburn and Georgia Tech.  After directing a come-from-behind victory over Virginia Tech in the Chick-fil-A Bowl, he was named game MVP.  As a sophomore, Stafford guided Georgia to wins over Florida, Auburn and Georgia Tech, marking the first time the ‘Dogs had defeated all three rivals in the same season since 1982.  He capped the campaign by throwing for 175 yards and a touchdown in Georgia’s 41-10 rout of Hawaii in the Sugar Bowl.  Georgia entered the 2008 season ranked number one in the nation, and Stafford was considered a favorite to win the Heisman Trophy [Daily Dose, 12/9/16].  After opening the year with four wins, the ‘Dogs lost three of their next eight and dropped to 16th in the national rankings.  Georgia ended the season with a 24-14 victory over Michigan State in the Capital One Bowl, where Stafford was named MVP.  His 25 touchdown passes in 2008 broke the single-season school record and his 3,459 passing yards were the second-most in Georgia history.

After being named to the 2008 All-American Team and throwing for 51 touchdowns and over 7,700 yards in three years at Georgia, Stafford decided to forgo his final year of eligibility and turn pro.

The Wonderlic is an aptitude test that is favored by the NFL for measuring the mental acuity of college prospects.  It consists of 50 multiple-choice questions to be answered in 12 minutes.  A score of ten suggests a person is literate and 20 indicates average intelligence.  Stafford scored 38 on the Wonderlic test.  The average for an NFL quarterback is 24—two points lower than that of an offensive tackle.  After running a 4.81 in the 40-yard dash at the NFL combine, the Detroit Lions selected the 6’3”, 227-pound Matthew Stafford with the first overall pick of the 2009 NFL Draft.

Before the start of the 2009 season, Lions head coach Jim Schwartz announced Stafford as starting quarterback, saying, “This isn’t an internship or an experiment.”  In Week 11 against the Cleveland Browns, Stafford surpassed Dan Marino [Daily Dose, 9/7/15] as the youngest quarterback in league history to throw for five touchdown passes in one game.  After suffering a separated shoulder on the next-to-last play of the game, he returned to throw his fifth and final touchdown pass as time expired.  NFL Films creator Steve Sabol [Daily Dose, 9/11/15] called it the most dramatic performance he had seen in 30 years.  Stafford missed all but three games in 2010 due to a shoulder injury that required reconstructive surgery.  He returned the following year to throw 41 touchdowns and more than 5,000 yards en route to being named 2011 Comeback Player of the Year.  After posting losing records in each of the next two seasons, the Lions fired Schwartz, announcing Jim Caldwell as their new coach in January 2014.  Stafford responded by leading Detroit to the playoffs and was selected to his first Pro Bowl, where he was named Offensive MVP after passing for 316 yards and two touchdowns.  In 2015, he became the first quarterback in NFL history to complete at least 60 percent of his passes in all 16 games.  Last season, he led Detroit back to the playoffs after directing eight fourth-quarter comebacks–an NFL record.  Despite playing with a dislocated finger on his throwing hand, Stafford reached 30,000 career passing yards in just 109 games played, breaking the mark held by Marino and Kurt Warner [Daily Dose, 7/22/16], who did it in 114 games.

Happy 29th birthday to the man that Clayton Kershaw—who has thrown an MLB no-hitter and won three Cy Young Awards—believes has the better arm.

“Matthew Stafford eventually will be the number one pick in the NFL Draft.  Write that down.” – Mel Kiper Jr., on ESPN Radio in September 2006