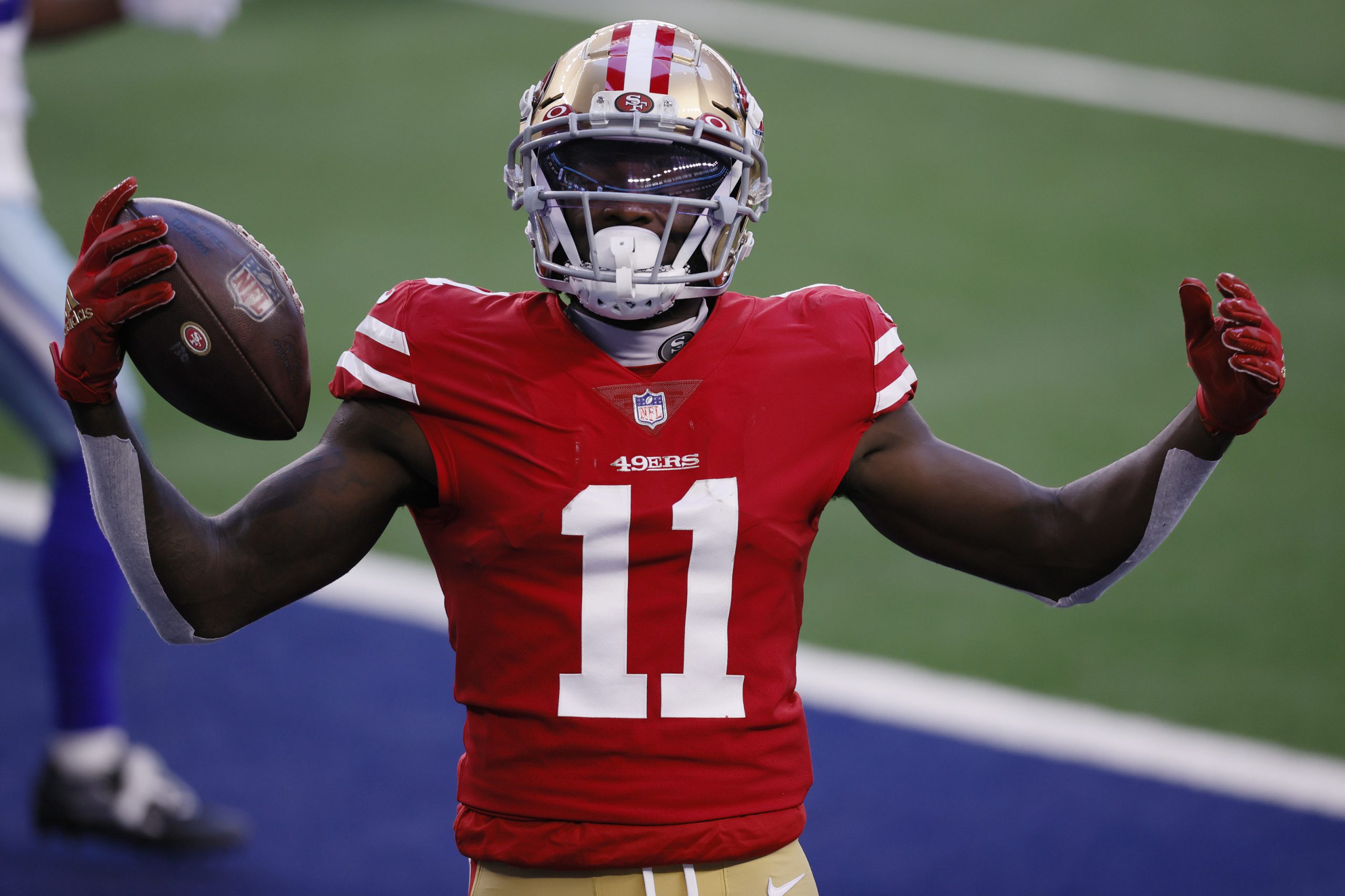 Happy 53rd birthday to the greatest wide receiver in the history of professional football.

Jerry Lee Rice was born in Starkville, Mississippi, on this date in 1962 and grew up in the small town of Crawford—population 641—as one of eight children in his family. Rice’s father was a brick mason and young Jerry developed hand strength and a rigorous work ethic laboring for his father’s business during hot Mississippi summers. He honed his speed by chasing down Pete, a black stallion that grazed on his family’s property, in order to ride him. A self-proclaimed “nerd” in high school, he went out for the football team in his sophomore year at B.L. Moor High School, where his speed and exceptional hands helped him excel on the field. Several southern colleges expressed interest in Rice, including Mississippi State and Jackson State [Daily Dose October 7] but he was not interested in programs that featured run-oriented “wishbone” offenses and chose Mississippi Valley State after their coach, Archie Cooley, came to see him play in person. Rice headed to the Mississippi Delta, where he blossomed as a wide receiver in Cooley’s spread offense and teamed with quarterback Willie “Satellite” Totten to form the “Satellite Express.” As a sophomore, Rice caught 66 passes for 1,133 yards. In his junior campaign, he set an NCAA record with 102 receptions and 1,450 receiving yards. He caught 24 passes in one game that season and was named Division I-AA All American. The pass-happy Delta Devils averaged over 59 points per game in his senior year– about 18 points fewer than their basketball team did that season– with Rice twice scoring five touchdowns in a single game. He caught 17 balls against Southern, 17 versus Kentucky State and 15 against Jackson State. He finished his career with 301 catches for 4,693 yards, 50 touchdowns, and 18 Division I-AA records. His touchdown record stood until 2006. Rice was named to every All-American team, finished ninth in Heisman Trophy voting and was named MVP of the Blue-Gray Classic all-star game, played on Christmas Day in 1984.

The defending world-champion San Francisco 49ers held the last spot in the 1985 NFL Draft. On draft day, they traded their first, second and third round picks to the New England Patriots in order to take Jerry Rice with the 16th overall selection. Scouts expressed concerns over his underwhelming 40-yard dash time of 4.7 and the inferior competition he faced in the Southwestern Athletic Conference but Forty-Niners president/head coach Bill Walsh was impressed with Rice’s precise route running, work ethic and competiveness and made him the third wide receiver chosen in the first round. Rice—nicknamed “World” because there wasn’t a ball in the world that he could not catch—dropped 15 passes in his rookie season, leading some to question Walsh’s draft day decision. Late in the year he caught ten passes for 241 yards—a team record—in a Monday night win over the Los Angeles Rams. It was the first of 274 consecutive games in which Jerry Rice caught at least one pass and he was named to the All-Rookie Team at the end of the 1985 season. The following year, he led the league in receiving yards and touchdown receptions, the first of six times he would lead the NFL in those categories. Rice was named league MVP in 1987 after hauling in 22 touchdown passes to set an NFL record, and he did it in just 12 games due to the player’s strike. In 1988, he caught 64 balls and averaged over 20 yards per catch to lead the Niners to Super Bowl XXIII against the Cincinnati Bengals. There, in possibly his finest performance ever, Rice set Super Bowl records with 11 grabs for 215 yards and a touchdown in route to being named game MVP. San Francisco successfully defended their title the following year, with Rice catching a record three touchdown passes in the Super Bowl. He had another fine year in 1990, including a five-touchdown game in Week 6 against the Atlanta Falcons. Rice scored his 127th NFL touchdown in 1994 to move into first place on the career touchdowns list and, over the next three seasons, racked up a whopping 342 catches for 4,601 yards and 36 touchdowns. The 6’2”, 200 pound Rice was known for his fitness level and durability, allowing him to play in 189 consecutive games before tearing his ACL and MCL in the 1997 season opener. He came back the following season to nab 82 passes for 1,157 yards and 9 touchdowns while earning his 12th trip to the Pro Bowl. Mr. Rice signed with the Oakland Raiders for the 2001 season and played three years there before being traded to the Seattle Seahawks in 2004. He retired after that season, his 20th year in the NFL.

Jerry Rice redefined the wide receiver position in professional football. He holds nearly 100 NFL records and holds a wide margin over his closest pursuers. Rice caught 197 touchdown passes, 41 more than Randy Moss. He scored 208 total touchdowns, 33 more than Emmitt Smith. “World” grabbed 1,549 passes, 224 more than Tony Gonzalez. Rice compiled over 1,000 receiving yards 14 times in his career, including 11 straight seasons, and led the league in that category six times. He finished his career with 22,895 receiving yards, nearly 7,000 more than the second player on the list and caught 100 or more passes in four different campaigns. He was inducted into the College Football Hall of Fame in 2006 and the Pro Football Hall of Fame in 2010, the same year the Forty Niners retired his #80. He played in 303 games, more than any non-kicker in NFL history and was named to the NFL’s All-Decade Team for the 1980s and 1990s as well as the 75th Anniversary All-Time Team. In 1999, Mississippi Valley State renamed their football arena Rice-Totten Stadium and 11 years later the NFL Network named him number one on its list of the 100 greatest players.

“Today I will do what others won’t, so tomorrow I can accomplish what others can’t”– Jerry Rice