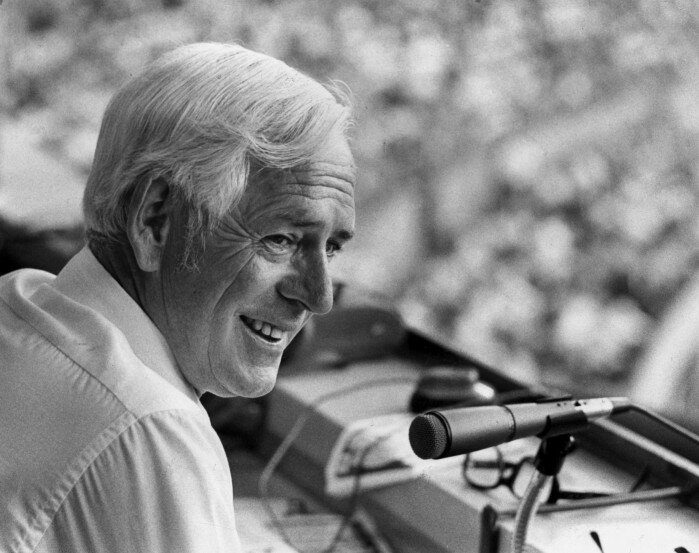 John Francis Buck was one of the greatest broadcasters in the history of American sports. Born in Holyoke, Massachusetts—about 90 miles west of Boston—on August 21, 1924, he was the third of seven children born to Kathleen and Earle Buck, an accountant for the Erie Railroad.  As a youngster, Buck listened to Boston Red Sox games on radio and his favorite player was BoSox slugger Jimmie Foxx.  His early influences included Mel Allen and Red Barber, radio voices of the Yankees and Dodgers, respectively, often imitating them while playing in sandlot games in his neighborhood.  After Buck wrote Red Sox manager Joe Cronin a letter suggesting a starting lineup, Cronin answered the youngster’s letter before using Buck’s lineup a few days later in a Boston victory.  In 1939, the family moved to Cleveland, where Buck became an Indians fan.  His father, who suffered from high blood pressure, died shortly thereafter and Buck helped provide for his family by hawking newspapers and working as a soda jerk at Franklin Ice Cream Shop.   Following graduation from Lakewood High School in January 1942, Buck worked on iron ore boats on the Great Lakes for a year-and-a-half before being drafted into the U.S. Army.  He was made corporal and assigned as a training instructor, where his commanding voice made him good at close order drills.  In February 1945, Buck was shipped out to the European theatre, landing in Liverpool, England.  One month later, he and his compatriots in K Company of the 9th Infantry Division were injured crossing the Ludendorff Bridge into Germany.  Buck suffered shrapnel injuries to his left arm and leg—as did fellow soldier and future sports broadcast hall of famer Lindsey Nelson—and was awarded a Purple Heart before returning home in April 1946. Upon his return from World War II, Jack Buck enrolled at Ohio State University on the GI Bill, majoring in radio speech.  He began working at campus radio station WOSU, where a broadcasting teacher told him to, “find something else to do for a living.”  With no experience, he called Buckeye basketball games before graduating in 1949.  After college, he called games for the Columbus Red Birds, the AAA affiliate of the St. Louis Cardinals and in 1952 began working for WBNS-TV in Columbus.  One year later, Anheiser-Busch bought the Cardinals and their affiliates and Buck was invited to join to the big-league team after beating out future Los Angeles Laker broadcasting legend Chick Hearn in an audition.  In 1954, Buck joined Harry Carey and former Cardinal Joe Garigiola on Cardinal broadcasts for KMOX radio.  St. Louis was the westernmost team in MLB at that time, and the fan base extended well beyond that of most teams.  Buck was dropped from the Cardinals booth in 1959, went to work calling the “Game of the Week” for ABC, and returned to the Cardinals in 1961.  After Carey was fired in 1969, Buck ascended into the lead play-by-play role, a position he held for the next 32 years.  in 1960, he called the first AFL game ever played and covered the famous “Ice Bowl” game in Green Bay in 1967.  From 1978 to 1995, he worked alongside Hank Stram calling NFL on CBS Radio.  “That’s a winner!” was his trademark phrase—something Buck said after every Cardinals victory—and was the title of his autobiography. Jack Buck was one of the most beloved broadcasters in American sports history. Rick Reilly wrote in Sports Illustrated, “He sends out the most wonderful descriptions of the game you’ve ever heard” and listening to his broadcasts were, “like talking baseball with the guy across the backyard fence.”   KMOX is a 50,000-watt clear channel radio station, which permits its nighttime signal to be heard throughout most of America’s Heartland, and Jack Buck was KMOX radio and” the voice of the St. Louis Cardinals.”  Buck was to the Midwest what Vin Scully [Daily Dose, November 27] is to the West Coast—respected, adored and caring to fans everywhere.  Although Buck worked in television, his real love was radio, where he called 17 Super Bowls and helped invent the talk radio format.  He worked for NBC, CBS and ABC, covered professional bowling, football, basketball, wrestling, soccer and hockey, serving as the original voice of the St. Louis Blues.  His most memorable moment may have been in his final public appearance on September 17, 2001, when, in a pregame ceremony at Busch Stadium in St. Louis, he read “For America,” a patriotic poem he had written, on the night baseball resumed following the terrorist attacks in New York City just six days earlier.  MLB Commissioner Bud Selig later said “it was what brought baseball back” and ESPN voted it one of the 100 Most Memorable Moments in Sports in the past 25 years.  In 1991, Mr. Buck was joined in the Cardinals broadcast booth by his youngest son, Joe, where they worked together until Joe became the lead announcer for FOX in 1994.  Jack Buck is a member of the National Baseball, Broadcasters, Radio and St. Louis Sports Halls of Fame.  Mr. Buck died from a combination of illnesses in 2002.  His bronze statue has stood at the entrance to Busch Stadium since 1998.