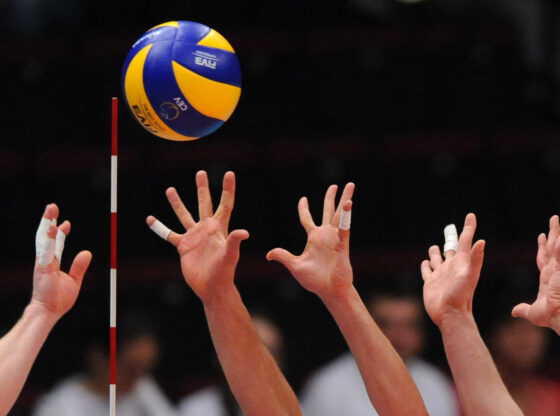 On this date in 1895, the first game of Mintonette was played at the Holyoke YMCA.  One year later, the game’s name was changed to Volleyball.

In the 1890s, William G. Morgan, a physical education director of the YMCA in Holyoke, Massachusetts, was responsible for developing activities for local businessmen who were looking for organized recreation after busy workdays.  While a student at nearby Springfield College in 1892, Morgan befriended Dr. James Naismith, who had invented basketball at the school nine years earlier.  Like Naismith, Morgan pursued a career in physical education at the YMCA.  Believing basketball was too strenuous for many, Morgan created an alternative.  Calling it “Mintonette,” he incorporated the net from badminton [Daily Dose, 8/1/16], the ball from basketball, the concept of innings from baseball, and the use of hands from handball.  “In search of an appropriate game, tennis occurred to me, but this required rackets, balls, a net and other equipment, so it was eliminated,” wrote Morgan.  “But the idea of a net seemed a good one.  We raised it to a height of about six feet, six inches from the ground, just above the head of an average man.  We needed a ball and among those we tried was a basketball bladder, but this was too light and too slow.  We therefore tried the basketball itself, which was too big and too heavy.”

Morgan demonstrated the game to YMCA physical education directors at a conference in Holyoke in 1896.  He took two teams of five men to a local gymnasium, explaining that the object of the game was to keep the ball in movement over the net, moving it from one side to the other.  Witnessing the exhibition, professor Alfred Halstead proposed the name Mintonette be replaced with Volley Ball–and the name stuck.  In 1952, the United States Volleyball Association [USVBA] voted to spell the name as one word.  In 1900, Morgan asked the A.G. Spalding Company—which had developed the first basketball for Dr. Naismith–to make a ball for his sport, which they did at their factory in Chicopee, Massachusetts.

Morgan asked his friends, Dr. Frank Woods and John Lynch—who was Holyoke’s Fire Chief—to draw up the first set of ten rules, which were implemented in the first official handbook of the North American YMCA Athletic League in 1897.  Three years later, Canada became the first foreign country to adopt the game, and volleyball was introduced to China and Japan in 1908.  Volleyball was made part of the 1913 Far East Games in Manila before spreading to India, Mexico, South America and Europe.  By 1916, the game had reached over 200,000 participants.  After the YMCA coaxed the powerful NCAA to publish articles on volleyball, the sport grew rapidly among college students.  The 1924 Olympic Games in Paris included a demonstration of American sports, one of which was volleyball.  The first two-man beach game was played in 1930, the same year of the first YMCA National Championships–held in Brooklyn.  The game took a huge leap forward in 1947 with the creation of the Federation Internationale De Volley-Ball [FIVB], the sport’s governing body.  Two years later, the inaugural World Championships were held in Prague, Czechoslovakia.

Fifty years after being introduced as a demonstration sport in Paris, volleyball became a permanent part of the Olympic program at the 1964 Summer Games in Tokyo.  The Soviet Union won the men’s gold medal in 1964, one of four times the Russians have won the Olympic tournament.  The U.S. men claimed gold in 1984, 1988 and 2008.  The Soviets also dominate the women’s game, having captured gold in four Olympics.  Originating in California in the 1930s, beach volleyball made its Olympic debut in 1996.  U.S. men have won gold in three of the Summer Games tournaments, as have the U.S. women.  The legendary duo of Misty May and Kerri Walsh [Daily Dose, 1/26/16] dominated women’s beach volleyball for more than a decade, winning 112 consecutive beach matches while capturing three straight gold medals from 2004 to 2012.  Fueled by expansion of FIVB international competitions such as the World Championships, World League, Grand Prix, Word Cup, and Grand Champions Cup, both the indoor and outdoor games now enjoy huge popularity.  Today, more than 120 years after it was first conceived, volleyball is played by more than 800 million people worldwide, including nearly 50 million participants in the U.S.

Volleyball has undergone several significant rule changes since its inception.  In 1900, the height of the net was raised to seven feet, six inches [later raised to eight feet in 1916], and possession of the serve changed after each side out [eliminating innings].  Two years later, the number of players per side was limited to six, teams were required to rotate [clockwise] prior to serving and each side was limited to three touches of the ball before it had to cross the net.  In 1916, second serves were eliminated and the length of the game was reduced from 21 points to 15.  Beginning in 1925, games had to be won by a two-point advantage.  Prior to 2001, a serve that touched the net was deemed illegal.  Today, the ball is allowed to touch the net while crossing it on the serve, providing it lands in play.

A volleyball court is just under 30 feet wide and 60 feet long, divided into equal square halves by a one-meter-wide net.  When the ball contacts the floor within the court boundaries or an error is made, the team that did not make the error is awarded a point.  A ball that hits the line is counted as in.  The team that won the point serves for the next point.  If the team that won the point was serving, the same player serves again.  If the team that won the point was not serving, they get the ball, with all players rotating in a clockwise manner prior to the serve.  Before 1999, points could only be scored by the serving team [side-out scoring].  Beginning in 2001, rally point scoring went into effect.  Games are known as sets, with first team to 25 [must win by two] winning the set.    Matches are best-of-five sets and the fifth set, if necessary, is usually played to 15 points.

The birthplace of volleyball was also the birthplace of legendary announcer Jack Buck [Daily Dose, 2/17/16] and 1993 PGA Champion and former U.S. Ryder Cup captain Paul Azinger.  Holyoke is home to the Volleyball Hall of Fame, which inducts a new class of athletes, coaches and contributors each October.  Opened in 1987, the Volleyball Hall of Fame is located in Heritage State Park.  In 1985, William G. Morgan was inducted into the hall as its first member, and an elementary school in Holyoke–William Morgan School–bears his name.  Beginning in 1995, the Morgan Trophy has been awarded annually to the most outstanding male and female college volleyball players in the United States.  Eight miles south of Holyoke is Springfield, Massachusetts—the birthplace of basketball and home to the Naismith Memorial Basketball Hall of Fame.  Like his friend William Morgan, Dr. Naismith was inducted into his sports hall as a charter member.