Mel Allen – The Voice of the New York Yankees 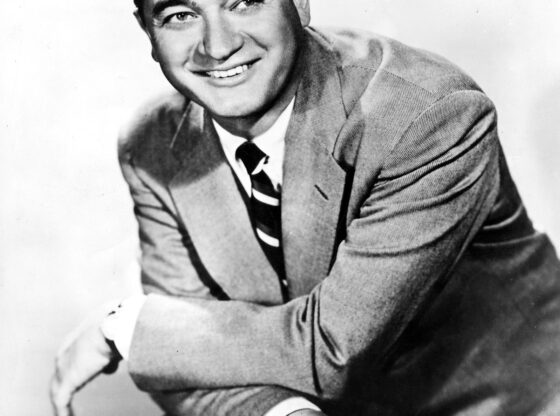 Mel Allen was the Voice of the Yankees.

During his heyday, Mel Allen was the most famous radio voice in America, where he was heard by millions.  His renown was partly an accident of time and place: in New York when the Yankees were king.  Like Curt Gowdy and Al Michaels, Allen’s presence signified it was a major event.  His exuberant style and rich voice conveyed excitement.

In a career that spanned six decades, Allen worked as a disc jockey, hosted a newsmagazine program on radio, and provided voiceover narration for Fox Movietone newsreels.  He called 20 World Series and 24 All-Star Games.  Although best known for his work in baseball, Allen also covered college football,  broadcasting 14 Rose Bowls, five Orange Bowls, and two Sugar Bowls.  He served as play-by-play man for the Washington Redskins in 1952 and ’53 and later called games for the Miami Dolphins and Miami Hurricanes.

Ranked by the American Sportscasters Association the second greatest sportscaster of all time — behind only Vin Scully — Allen was the play-by-play man for the New York Yankees from 1940 to 1964.  First on radio and later on television, Allen was a pioneer.  He was the first announcer to call road games live [baseball broadcast studio re-creations until the early 1940s], and was the first to suggest the centerfield camera shot, now a staple in baseball telecasts.

Allen lost his voice late in the fourth and final game of the 1963 World Series, in which the Dodgers swept the Yankees.  Dodgers announcer Vin Scully, who was paired with Allen on the national telecast, took over, telling him soothingly, “That’s alright, Mel.”

The venerable Voice of Summer rose to prominence as the Yankees appeared in 15 of the 18 World Series between 1947 and 1964.  Allen’s boom box of a voice became one of the most recognizable in radio.  His fame grew as television replaced radio, and he practically claimed the Fall Classic as his own stage.  In Allen’s time, more than half the television sets in America would be tuned into the World Series.  The Voice of the Yankees called the 1951 Series, the first time the event was televised coast-to-coast.

Allen’s catchphrases entered the American baseball lexicon.  Among them were “Hello there, everybody!” to start a game, “How a-bout that?! or “Going, going, gone!” on home runs.  Using that wonderful, unmistakable voice as an instrument, Allen would enthrall listeners with, Three and two.  What’ll he do?”  It was Allen who dubbed Joe DiMaggio Joltin’ Joe and Tommy Henrich Ol’ Reliable.

Born on Valentine’s Day 1913, in Birmingham, Alabama, Melvin Allen Israel was the eldest of three children born to Russian Jewish immigrants.  His father was a dry goods salesman who settled the family in Tuscaloosa.  As an undergrad at Alabama, Allen served as the public address announcer for Crimson Tide football games.  When radio station WBRC-Birmingham was looking for a play-by-play announcer, ‘Bama head football coach Frank Thomas recommended Allen for the job.

Allen graduated from the University of Alabama School of Law in 1937, then took a train to New York City for a week’s vacation.  While there, he auditioned for a position with the CBS Radio Network.  The ambitious youngster was hired for $45 a week and changed his name to Melvin Allen.  He impressed his bosses while calling the Vanderbilt Cup yacht race from an airplane overhead.  It led to his first baseball assignment – providing color commentary for the 1938 World Series.

The Yankee announcer was masterful as a pitchman for the sponsors.  A home run was a Ballantine Blast for the beer sponsor or a White Owl Wallop after the cigar sponsor.

Allen was hired as play-by-play man for both the New York Yankees and Giants in 1940, broadcasting for both teams as only their home games were broadcast at that time.  He served as the voice of both clubs until 1943, when he joined the Army.  Both the Yankees and Giants wanted Allen after his discharge in 1946.  He chose the Yanks.  It was a marriage of The Voice and The Dynasty.

During his first full season as Yankee play-by-play man, Allen ran into Hall of Fame first baseman Lou Gehrig, who had been forced to retire the prior year after being diagnosed with ALS.  While speaking with Allen in the Yankee dugout before one game, Gehrig told Allen, “Mel, I never got a chance to listen to your games before because I was playing every day.  But I want you to know that they’re the only thing that keeps me going.”  Allen broke down in tears after Gehrig departed.

Along with long-time Brooklyn Dodger play-by-play man Red Barber, Mel Allen was one of the two inaugural winners of the Baseball Hall of Fame’s Ford C. Frick Award, presented annually to a broadcaster who has made a major contribution to baseball.  It is the profession’s highest honor, resulting in a permanent place in Cooperstown.

Allen was constantly compared with Barber, his cross-town rival and frequent World Series partner.  One was a machine gun, the other a violin.  “The Ol’ Redhead was white wine, crepes Suzette and bluegrass music,” observed Curt Smith.  “Mel was beer, hot dogs, and the United States Marine Band.”  Barber joined the Yankees’ booth in 1954 and teamed with Allen for the next decade.

“He gave the Yankees his life,” said Red Barber, “and they broke his heart.”

Accused of being a homer, Allen acknowledged he was partisan but was quick to point out that he never rooted.  In September 1964, the inexplicable happened.  Days before the start of the World Series, the Yankees fired Allen, replacing him Phil Rizzuto, his sidekick in the radio booth.  It was the first Yankees World Series Allen had not been a part of since 1943, which he missed due to Army service.  To this day, the Yankees have never explained the firing, although speculation abounds.

Allen worked some Milwaukee Braves and Cleveland Indians games in the mid-to-late 1960s but would not commit to either team full-time.  The Yankees brought their former play-by-play man back for special events.  In 1976, Allen was hired to call games on SportsChannel cable and remained with the Yankees play-by-play crew until 1985.  From 1977 until his death, Allen hosted This Week in Baseball, where he was introduced to a whole new generation of baseball fans.

The great Mel Allen died of heart failure at his home in Greenwich, Connecticut, June 16, 1996.  He was 83.  His one-week vacation to New York had turned into 60 years.  Mr. Allen is a member of the American Sportscasters Association Hall of Fame, the National Radio Hall of Fame and the National Sportscasters and Sportswriters Association Hall of Fame.  In July 1998, the Yankees dedicated a plaque in Yankee Stadium’s Monument Park in his memory.  The plaque, which calls Allen “A Yankee institution, a national treasure” includes his famous tag line, How about that?!

Despite his 1964 firing, Allen remained loyal to the Yankees for the rest of his life.  To this day – more than two decades after his death – Mel Allen is still known as the Voice of the Yankees.