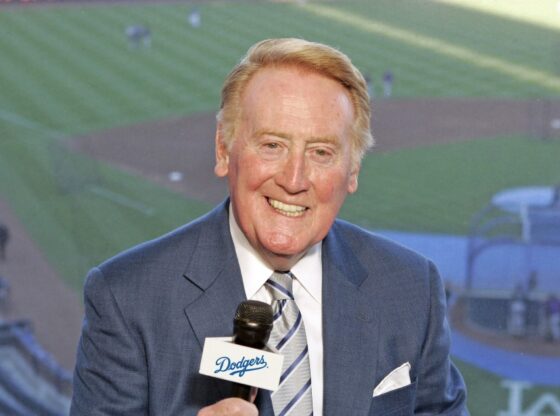 Vincent Edward scully has been broadcasting Dodger baseball since 1950, the longest time any broadcaster has been with a single team in professional sports history.

Born in the Bronx, New York, on November 29, 1927, he grew up in the Washington Heights neighborhood in northern Manhattan. Vincent’s father was a silk salesman and his mother a homemaker. Scully helped make ends meet by delivering mail and beer, working in the garment district and polishing silver in the basement of the Pennsylvania Hotel. In grammar school, Scully was asked to write a composition about what he wanted to do for a career. Young Vin, who had become fixated on radio broadcasts of college football, wrote that he wanted to be a sportscaster. Scully attended Fordham Preparatory School, a private, Jesuit, all-male high school located in the Bronx and alma mater of Hall of Fame infielder Frankie “The Fordham Flash” Frisch. Upon graduation, Scully joined the United States Navy, where he served for two years as part of the radio communications program. After World War II ended, Scully enrolled at Fordham University, where he helped found its FM radio station WFUV. He also played centerfield for the baseball team, sang in a barbershop quartet, served as assistant sports editor for the Fordham Ram and called radio broadcasts for Fordham Rams baseball, football and basketball. Scully graduated in 1949-and introduced himself to legendary broadcaster Red Barber, the radio voice of the Brooklyn Dodgers and sports director for CBS Radio. Barber assigned Scully to cover a Boston University-Maryland football game on a frigid mid-November day at Fenway Park. The 21-year-old Scully, expecting an enclosed press box, left his overcoat and gloves at his hotel and nearly froze as he broadcast the game to a national audience from the roof wearing only a sport jacket. Barber was impressed with Scully’s work ethic and invited him to join the Dodgers as the teams’ number three announcer the following spring.

Vin Scully showed up for spring training in Vero Beach, Florida in 1950 having never broadcast a major league game. Three-and-a-half years later, he became the youngest announcer ever to call a World Series. Barber got into a salary dispute with World Series sponsor Gillette prior to the 1953 World Series so Scully took his spot. Afterward, Barber took a job with the New York Yankees and Scully became the Dodgers’ principal announcer—a position he still holds over sixty years later. The Dodgers famously moved from Brooklyn to Los Angeles after the 1957 season and Scully moved with them. L.A. is known for its freeways, and Dodger fans listened to Vin Scully’s broadcasts as they drove the city. They also listened to Scully on transistor radios while attending the game—a practice that started with fans looking for help in following the action at the cavernous Los Angeles Coliseum and one that continued when the team moved into Dodger Stadium in 1962.

Mr. Scully covered tennis, PGA Tour golf and the NFL for CBS from 1975 to 1982. He moved to NBC, where he called baseball, including Game of the Week, three World Series, four All Star Games and four NL Championship Series from 1983 to 1989. Scully broadcast the World Series for CBS Radio from 1990 to 1997 and the annual Skins Game [golf] for ABC from 1991 to 1996. Vin Scully is known for his dulcet, somewhat nasally, voice and lyrically descriptive style. He opens each broadcast with, “It’s time for Dodger baseball! Hi, everybody, and a very pleasant good evening to you, wherever you may be.” If you ask baseball fans from New York, Chicago or Dallas who they most associate with the Dodgers, you’d likely get answers like Clayton Kershaw, Sandy Koufax, Tommy Lasorda or Jackie Robinson. If you ask that question of a Southern Californian, you’ll get only one name—Vin Scully. He has been called the “soundtrack to summer,” the “poet laureate of baseball” and served as Grand Marshall for the 2014 Tournament of Roses Parade. MLB Network ranked him the number one baseball broadcaster of all-time and he was awarded the Ford C. Frick Award [broadcaster who made major contributions to baseball] in 1982. In 2000, he was named top broadcaster of the 20th century and was honored with a Life Achievement Emmy Award for excellence in sports broadcasting in 1995.

Vincent Edward Scully has covered 25 World Series and 12 MLB All-Star Games. He called “The Catch” [Daily Dose, October 8] made by Dwight Clark to send the San Francisco 49ers to the 1982 Super Bowl, Kirk Gibson’s walk-off home run off Dennis Eckersley to win Game One of the 1988 World Series, Hank Aaron’s 715th career home run and Mookie Wilson’s ground ball that went through Bill Buckner’s legs to win Game 6 of the 1986 World Series for the New York Mets. Scully has called three perfect games, the Dodgers first world championship in 1955, and the team’s first game in Los Angeles, April 18, 1958. When Vin Scully broadcast his first Dodger game on radio, gasoline cost 25 cents per gallon, a postage stamp cost 3 pennies, the minimum wage was 75 cents an hour and Connie Mack was still managing. He has seen twelve U.S. Presidents and the addition of two states to the Union. The “Voice of the Dodgers” has announced that he will return to the booth for his 67th and final season in 2016.