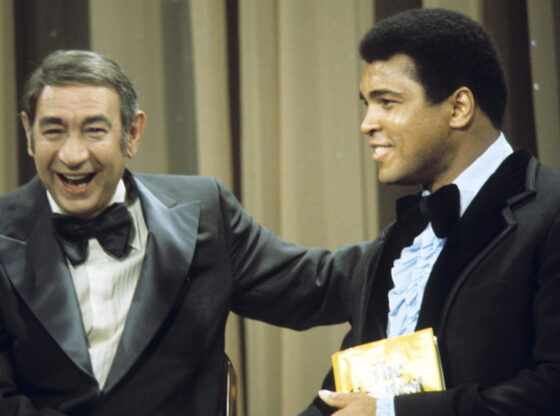 Howard William Cosell was once voted the most popular and most disliked sportscaster in America—in the same poll.

Born Howard William Cohen in Winston-Salem, North Carolina, on March 25, 1918, to Polish immigrants, his family moved to Brooklyn when Howard was an infant. Cohen’s father worked long hours as an accountant for a chain of clothing stores and his grandfather was a rabbi.

Cohen played varsity basketball and wrote for the school newspaper at Brooklyn’s Alexander Hamilton High School before entering New York University, where he studied English literature and was a member of Pi Lambda Phi social fraternity. Upon graduation, Cohen enrolled in NYU School of Law, where he was editor of the law review.

He also changed his last name from “Cohen” back to “Cosell” to comply with the wishes of his late grandfather, whose name had been interpreted incorrectly by an immigration inspector upon arriving from Poland. Cosell graduated from NYU in 1940 and was admitted to the New York State Bar one year later.

He joined the United States Army Transportation Corps, where he was stationed at the New York Port of Embarkation while earning the rank of major. In 1944, he married Mary Edith Abrams in a judge’s chambers in Brooklyn.

After World War II ended, Cosell began practicing labor law in Manhattan, where some of his clients were actors and athletes, including Willie Mays. He also represented the Little League of New York and, in 1953, began hosting a radio show on flagship WABC featuring Little Leaguers asking questions of major league baseball players.

Three years later, he left a $30,000-per-year law practice for a six-week $250 contract doing five-minute weekend radio broadcasts for WABC. His aggressive, ambitious approach to sports reporting was atypical for that era and within a year he was appearing on Sports Focus, a commentary program that was introduced as a summer replacement for Kukla, Fran and Ollie.

In 1961, he was made the evening sports reporter on New York’s WABC-TV and soon thereafter began announcing boxing matches for ABC’s Wide World of Sports. As an interviewer, Cosell asked difficult questions, gave athletes the opportunity to make personal observations and, in his words, “told it like it is.” Howard was controversial and his most famous interviews were with Muhammad Ali.

Cosell was the first reporter to refer to Ali by his Muslim name at a time when he was still known to the rest of the world as Cassius Clay and sided with Ali after the heavyweight champ was stripped of his belt for refusing to fight in the Vietnam War. He outraged many viewers of the 1968 Olympics for being sympathetic to sprinter Tommie Smith following his “black power” gesture on the medal stand in Mexico City and later sided with Curt Flood and the players union in their push to usher in the era of free agency in baseball.

In 1970, ABC had the lowest ratings of any of the three major television networks and sports producer Roone Arledge sought to create an entertainment spectacle by broadcasting NFL football in prime time, an idea that most industry analysts believed would fail.

It drew 33 percent of the viewing audience and, thanks largely to Cosell—Monday Night Football grew to become the highest-rated show in prime time history. Cosell was a polarizing figure, engaging in caustic banter with Meredith. Bars held contests during MNF games where the winner had the honor of throwing a brick through a TV with Cosell’s face on it. Mr. Cosell left MNF telecasts following the 1983 season, proclaiming that pro football had become a “bore.”

Cosell was the voice of boxing for over two decades, calling the sport’s biggest bouts, before denouncing professional boxing during a lopsided fight between Larry Holmes and an overmatched Randall “Tex” Cobb two weeks after the fatal fight between Ray Mancini and Duk Koo Kim.

It was the last pro match that Cosell ever called, although he did return to broadcast boxing events at the 1984 Olympics in Los Angeles. During his 40-year career, Cosell also called major league baseball, debuted the “ABC Sportsbeat” magazine show and infamously hosted “Battle of the Network Stars.”

In the 1970s and 1980s, Howard Cosell was the nation’s best known and most outspoken broadcaster. Howard was more than a sports broadcaster—he was a television star. He was a lightning rod for criticism and his nasal, Brooklyn-infused, staccato style of speech was often imitated. Cosell commanded attention and helped make Monday Night Football an event—part of American pop culture—that paved the way for live sports in prime time. His effect on American sports coverage was revolutionary.

Upon his passing in 1995, the New York Times wrote, “He entered sports broadcasting in the mid-1950s, when the predominant style was unabashed adulation and offered a brassy counterpoint that was first ridiculed, then copied until it became the dominant note of sports broadcasting.” He got his start in radio, made his name in boxing and reached the pinnacle of his career covering Monday Night Football, and along the way hosted Saturday Night Live, the Dick Cavett Show, theTonight Show as well as his own short-lived variety show.

Mr. Cosell famously broke the news of John Lennon’s murder during a MNF game in 1980 and will forever be connected with Muhammad Ali and “Dandy” Don Meredith. He authored four books, including “I Never Played the Game,” in which he popularized the word “jockocracy” to describe how athletes were given announcing jobs that they had not earned.

“Arrogant, pompous, obnoxious, vain, cruel, verbose, a showoff…I’ve been called all of these. Of course I am.”– Howard Cosell, from his autobiography “I Never Played the Game”