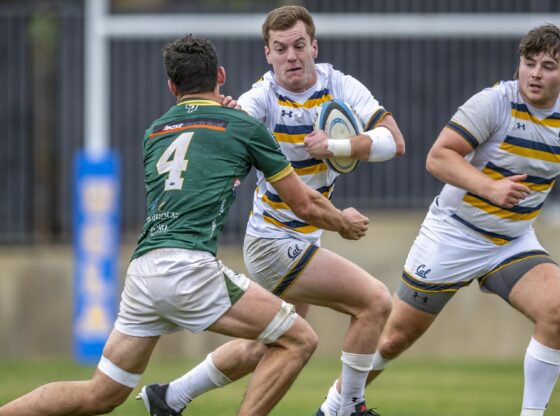 The University of California-Berkeley has the most dominant program in the history of college rugby.

Cal is more unbeatable than either John Wooden’s UCLA Bruins or Geno Auriemma’s UConn Lady Huskies, both of whom won 11 titles.  Alabama football, winners of 17 national championships, pales in comparison to the Golden Bear ruggers.  Cal rugby is even more successful than Iowa wrestling, a program that has garnered 23 national crowns.

The 2018-19 season was the 137th year for Cal rugby, making it the oldest intercollegiate sport at the University of California.  The Golden Bears have won 33 titles since the national collegiate championships for rugby began in 1980.  Cal has captured 28 national 15s championships, including 12 in a row from 1991 to 2002.  The Bears won five straight championships from 2004 to 2008, then back-to-back crowns in 2010-11 and 2016-17.  Cal has also won five championships in national sevens, capturing five CRC titles in a row between 2013 and 2017.

Cal has produced 136 rugby All-Americans and 57 players who have made over 700 combined appearances on the U.S. National 15s team.  Eleven Golden Bears have played in the Olympics.  Of the 30-man U.S. squad at the 2011 Rugby World Cup, seven were Cal alums.

Cal rugby men set up their own field, hang their own banners, bag up the trash, and clean up after the game.  Part of the game-day regimen includes putting the American flag up, and at the end of the day, taking it back down.

The sport of rugby has two variations.  The most traditional is rugby 15s, which involves 15 players per side playing two 40-minute halves.  The second version is rugby 7s, which includes two teams of seven players each competing in seven-minute halves.  The sport is increasingly popular at the collegiate level, with over 900 teams – male and female – registered with USA Rugby, the game’s governing body in the U.S.  The number of American college rugby programs has more than doubled in the past decade.  Since its return to the Summer Olympics in 2016, rugby 7s has been especially popular.

There are two premier college rugby 7s competitions in America.  One is the USA Rugby Sevens Collegiate National Championships.  First contested in 2011, the event is slated for Memorial Day weekend this year.  The other is the Collegiate Rugby Championship [CRC], which began in 2010.  Held every June in Philadelphia, the two-day tournament features 20 teams.  The CRC is broadcast on live on ESPN and attracts over 28,000 fans to Talen Energy Stadium.

Rugby union began play at Cal in 1882 and continued until 1886, when it was ditched in favor of tackle football.  Rugby would make a return in 1906 after football was deemed too dangerous.  Football reappeared in 1914 and Cal would not field a rugby team for almost 20 years.

In 1931, rugby returned to Berkeley under alumnus Ed Graff.  Seven years later, the legendary Miles “Doc” Hudson took over the program.  A practicing dentist, Hudson guided the Bears for 37 years, amassing an incredible record of 339-84-23.  Doc was succeeded by Ned Anderson, who captained the Golden Bears team that toured Australia in 1971.  Anderson led Cal to its first NCAA title game victory in 1980, then reeled off three more before stepping down following the 1983 season.

Anderson was replaced by one of his assistants, Jack Clark, who, in 1984, became just the sixth coach in Cal history.  Clark, who lettered in both football and rugby at Cal, had stints with the Philadelphia Eagles and CFL’s Winnipeg Blue Bombers before returning to rugby as a member of the USA National team. Recipient of the Craig Sweeney Award for his outstanding contributions to rugby in the U.S., Clark entered the 2018-19 season 653-92-5 [.851] in 15s and 152-18 [.881] in 7s.  A detail-oriented taskmaster, Clark is 37-1 against rugby powerhouses Army, Navy and Air Force.

My players will leave this campus with a Ph.D in “team.”

Under Clark, who gave up a lucrative career at 27 as a senior VP in an investment banking firm to coach rugby, Cal has reeled off win streaks of 115, 98, 70 and 60 games.  The Golden Bears have reached at least the semifinals of the NCAA tournament every year since its inception.  While the 6’5”, 250-pound U.S. Rugby Hall of Famer looks like the kind of guy “no one wants to mess with,” his coaching style is more about truth than intimidation.  Candid, sincere feedback, combined with performance, is the currency at Cal.  “As a player,” said Clark, “I craved honesty.”

Now in his 36th season at the helm in Berkeley, Jack Clark was coach of the U.S. National Team from 1993 to 1999, then served as GM until 2003.  He is assisted at Cal by Tom Billups and Mike MacDonald.  Currently in his 20th year on staff, the 54-year-old Billups is a former professional rugby player who coached the U.S. National Team from 2001-06.  A four-time All-American and national champion at Cal, MacDonald is in his seventh season with the Bears.

Cal is a member of the PAC Rugby Conference, comprised of seven Pac-12 schools.  Competing at the Division I level, it is one of the strongest conferences in college rugby, with five of its members consistently ranked in the top 25 in the nation.  The 2018-19 Cal roster is made up of 30 players representing 11 countries, including Australia, Japan, New Zealand, Hong Kong, Uruguay and Spain, among others.

The Golden Bears practice and play home games at 6,900-seat Witter Rugby Field.  Located near Cal Memorial Stadium in beautiful Strawberry Canyon, it is one of the most idyllic settings in college sports.  In spring, Cal ruggers train six days per week with Mondays off.  The schedule is less rigorous in fall, with three sessions per week.  A typical day begins with a carefully scripted practice from 8:30 to 10:00 a.m., followed by strength and conditioning sessions at the Simpson High Performance Center.  Matches are played on Saturday with film review and treatment on Sunday.

With his induction in 2015, Tom Billups became the 13th member of the Cal rugby program to enter the U.S. Rugby Hall of Fame.

While Cal rugby players do not receive scholarships, they do enjoy some benefits.  Student-athletes have regular mandatory meetings with an academic advisor and access to tutors at the Athletic Study Center.  Like all athletes at Cal, rugby players receive priority enrollment for classes.  Players in poor academic standing are not allowed to participate in rugby.  The 2018-19 Cal rugby season opened October 6 at the West Coast Collegiate 7s at Cal-Poly and ended March 30 at home against Saint Mary’s College.  The 2019 College 7s National Championship final is scheduled for Saturday, May 24.

This past Saturday, Life University beat Cal, 29-26, in the finals of the 2019 College 15s National Championship.  It was Life’s second straight College 15s title.