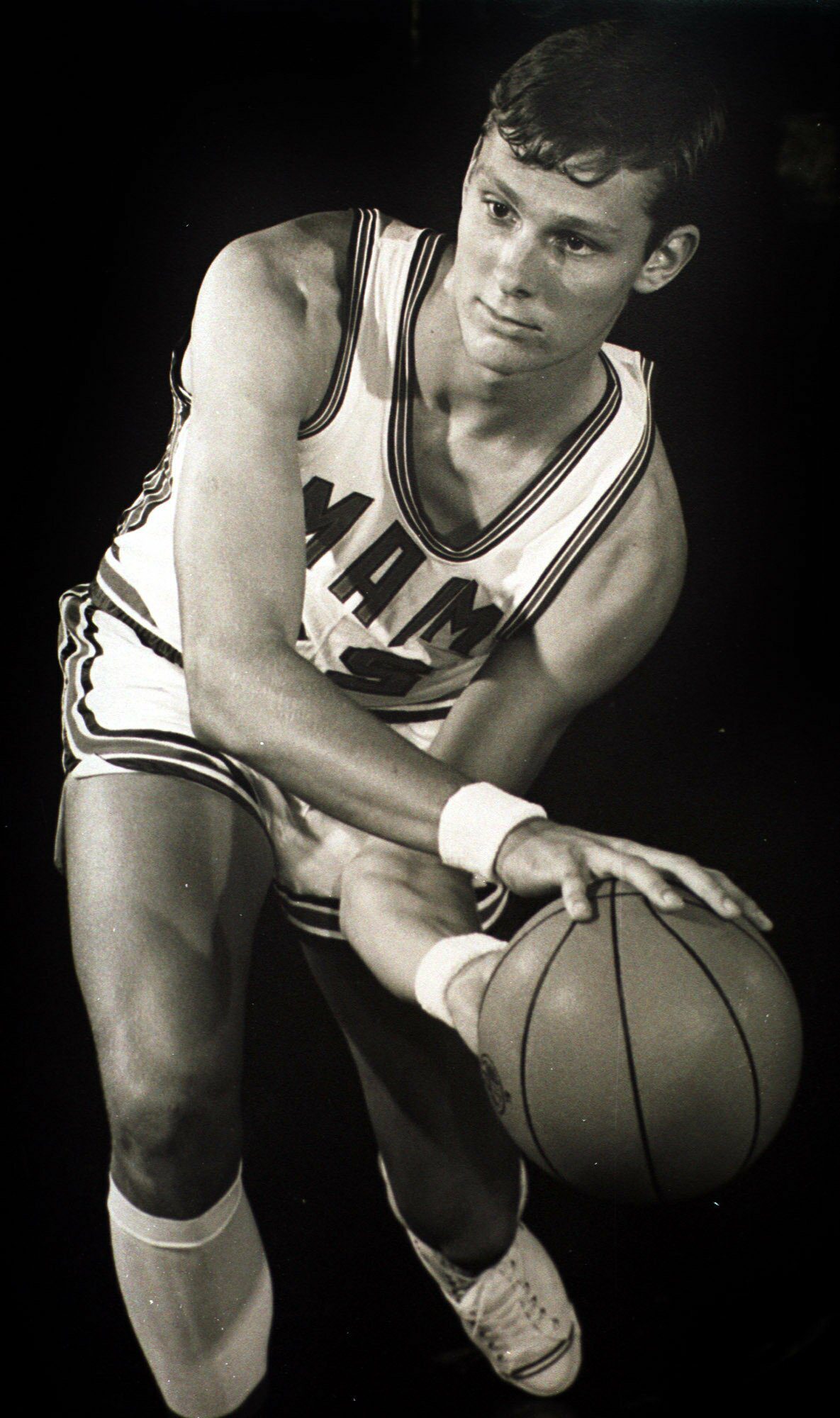 Richard Francis Dennis Barry III is the only player in basketball history to lead the NCAA, ABA and NBA in scoring for an individual season. Born in Elizabeth, New Jersey—about 30 miles southwest of Manhattan— March 28, 1944, he was the second son of a semi-pro basketball player and middle school coach.  Barry made his father’s St. Peter & Paul team as a fifth grader, the youngest player on the team, and also excelled in baseball.  He chose Number 24 in honor of his idol, Willie Mays [Daily Dose, August 17] and wore that number throughout his career.  Barry attended Roselle Park High School, where he hit .460 while earning two varsity letters, and was All-State in basketball in both his junior and senior years.  In the autumn of 1961,as Roger Maris [Daily Dose, September 10] was closing in on Babe Ruth’s cherished single-season home run record, Rick Barry headed for the University of Miami, where Hurricane basketball coach Bruce “Slick” Hale had convinced him he would become a star.  Barry never visited Miami—his only image of the campus was from a postcard—and did not consider any other schools.  “It was not hard to leave New Jersey for Miami.  The team played an independent schedule, which allowed us to travel to many new places and the program was not a powerhouse, so I knew I had a chance to play right away.”  In his first [sophomore] season, Barry averaged 20 points and 15 rebounds while establishing himself as the Hurricanes’ best player.  He single-handedly resurrected Miami’s program, helping the ‘Canes crack into a top-ten national ranking, but never played in the NCAA tournament, as Miami was on probation. As a senior in 1965, he led the nation with a 37.4 scoring average and was named First Team All-American, the first in Miami history, and averaged nearly 30 points and over 16 rebounds in 77 career games. The San Francisco Warriors selected Barry with the second overall pick of the 1965 NBA Draft, right behind Davidson’s Fred Hetzel, who San Francisco chose number one and who would go on to play for five teams in six NBA seasons.  In his first season, Barry broke Elgin Baylor’s rookie record for points [2,059], averaged a double-double in points and rebounds and was named 1966 Rookie of the Year.  The following year, he broke Wilt Chamberlain’s seven year hold on the league scoring title and led the Warriors to the NBA Finals, losing in six close games to Wilt’s Philadelphia 76ers, considered by many to be the greatest team in NBA history.  In 1968, Bruce Hale—who had been named coach of the newly-formed Oakland Oaks of the ABA—offered his former star a $75,000 contract and part ownership of the team, and Rick Barry jumped to the new league.  The Warriors contested in court and, after a ruling that Barry would play for San Francisco or not play at all, he spent the1967-68 season doing radio work for the Oaks.  The following year, he led the ABA in scoring and the Oaks to the league championship.  After four years in the ABA, Barry returned to the Warriors, who were now known as “Golden State,” where he spent the next six seasons.  The 1974-75 campaign was the best in Warrior history, as Barry led Golden State to a sweep over the heavily favored Washington Bullets to win the NBA title while being named Finals MVP.  He finished his career with the Houston Rockets, playing two seasons before retiring in 1980. Rick Barry was one of the best players in basketball history and was named to the NBA’s 50th Anniversary All-Time Team.  He played in 12 All-Star Games—four in the ABA and eight in the NBA—and was MVP of NBA contest in 1967.  Barry led the NBA in scoring in 1967 and was steals leader in 1975, the same year he was named regular season and Finals MVP.  In 14 professional seasons, Barry scored 25,279 points which, at the time of his retirement, was sixth on the all-time scoring list.  He averaged over 30 points per game in four different seasons, scored 50 or more points 15 times and poured in 40 or more points 115 times during his career, fourth-most in history.  The “Miami Greyhound” was a lethal shooter who invented the Point Forward position [small forward that makes plays, facilitates the offense and distributes the ball].  He was the first major star to jump from the NBA to the upstart ABA and pioneered the under-handed free throw, becoming so proficient that he only missed nine charity tosses in the entire 1978-79 season.  Barry is the greatest free throw shooter in ABA history and retired as the greatest in NBA history before his .8998 mark was surpassed by Steve Nash [Daily Dose, January 8].  He was a fierce, combative competitor who demanded much of himself and did not always get along with his teammates.  Mr. Barry is a member of the New Jersey Sports, Bay Area Sports, University of Miami and Naismith Basketball Halls of Fame and is one of two players to have had his basketball number retired by the University of Miami. On this date in 1980, Rick Barry became the first player in NBA history to hit eight three-pointers in a single game, scoring 24 points to lead the Rockets to a 117-95 win over the Utah Jazz in The Summit in Houston.

“You could send him to the United Nations and he’d start World War III.”–   Mike Dunleavy, friend and former teammate of Rick Barry