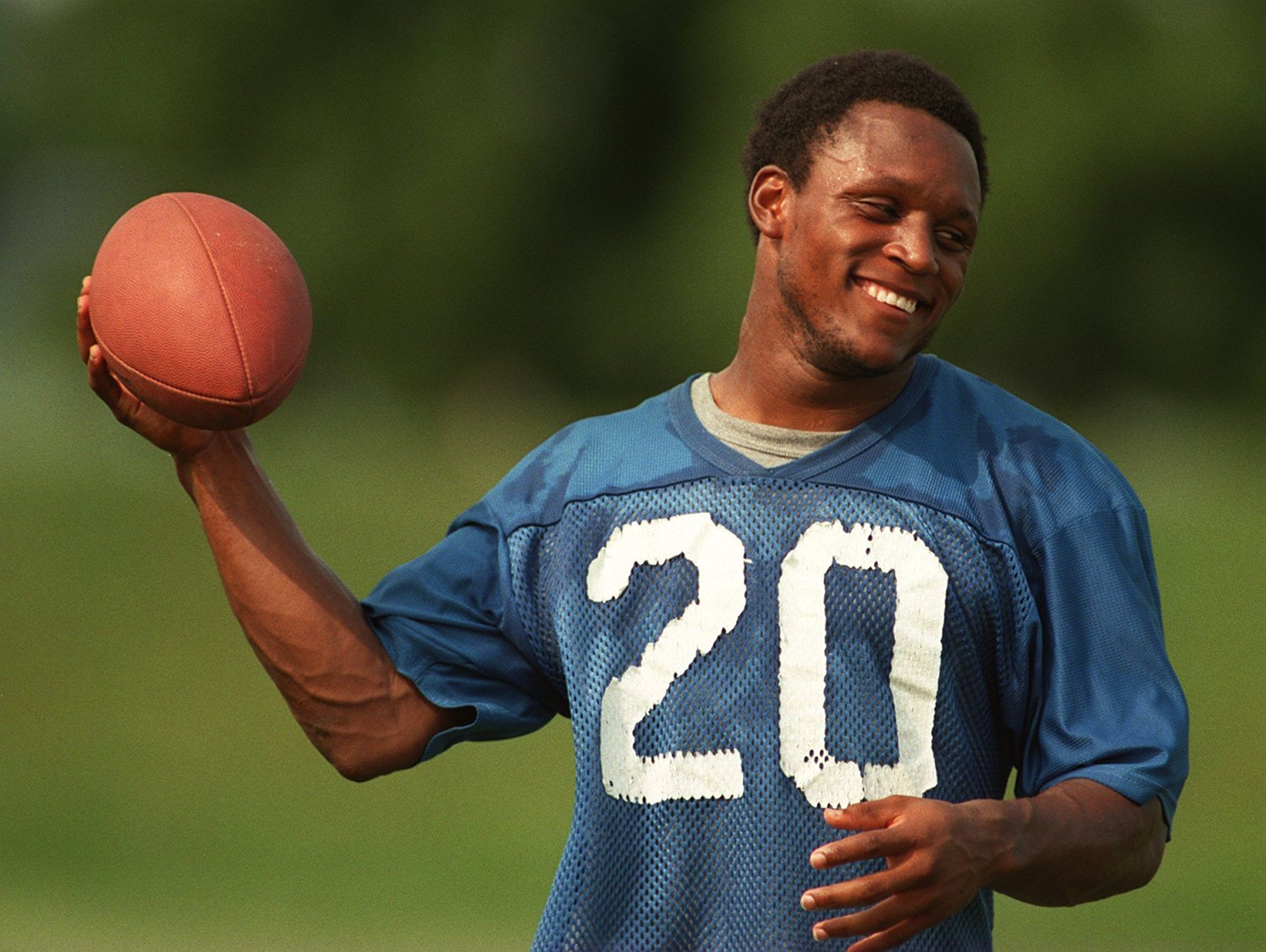 Barry Sanders in the most elusive runner in NFL history.

Born in Wichita, Kansas on this date in 1968, he attended Wichita North High School and won started at tailback his sophomore year before losing the spot to his older brother, Byron, the following season.  He did not regain the starting position until the fourth game of his senior year and promptly reeled off 1,417 in the next seven games, which earned him all-state honors.  Although he averaged 10.2 yards per carry, he was overlooked by most college recruiters and only received scholarship offers from Emporia State, Tulsa and Oklahoma State.  He enrolled at OSU and played for the Cowboys from 1986 to 1988.  He backed up All-American Thurman Thomas during his first two years and became the starter in his junior year.  He had what is arguably the greatest individual season in college football history in 1988, leading the nation by averaging 7.6 yards per carry and over 200 yards per game.  He rushed for over 300 yards in four games and also returned kickoffs and punts.  Sanders set college football season records with 2,628 rushing yards, 3,248 total yards, 39 touchdowns and ran for 200 yards in 5 straight games.  He won the Heisman Trophy in a landslide and capped off his season by running for 222 yards and scoring 5 touchdowns in three quarters of action in the season ending Holiday Bowl.  He opted to leave for the NFL following his junior season.

The Detroit Lions made Barry Sanders the # 3 selection in the 1989 NFL Draft just behind Michigan State’s Tony Mandarich.  He gained 18 yards on his first carry, scored a touchdown on his fourth and finished the season ten yards shy of the rushing title in route to being named Rookie of the Year.  He continued to pound defenses with an running style that combined quickness, strength and an uncanny ability to change direction.  His 5’8” height made him hard for defenders to find and his 205 pounds seemed to be centered mostly in his legs, making him hard to bring down.  He gained 2,166 combined yards [rushing and receiving] in 1994 and was named NFL Offensive Player of the Year.  He ran for 1,500 yards the following year and 1,553 the season after that.  Mr. Sanders’ best season came in 1997 when he became the third player in NFL history to rush for over 2,000 yards in a season [O.J. Simpson, Eric Dickerson].  That year included 14 consecutive 100 yard games and two 200 yard games and he became the first back to rush for 1,500 yards or more in five seasons, four of them consecutively.  Sanders shared MVP honors that year with Green Bay QB Brett Favre.

His Lions teams made the playoffs five times over the course of Sanders’ ten year career, including two NFC Central titles, but he never played in the Super Bowl.  The team’s best season came in 1991, when they amassed a 12-4 record and won their first playoff game since 1957 before losing to the Washington Redskins in the NFC Championship game.

Barry Sanders was named to the Pro Bowl in each of his 10 seasons.  He was a four time NFL rushing champion, two time league MVP, two time Offensive Player of the Year and is the third leading rusher in NFL history.  The Lions retired his # 20 jersey and he is member of the College Football [2003] and Pro Football [2004] Hall of Fame.  The great Jim Brown is generally considered to be the finest running back in pro football history.  Barry Sanders’ statistics compare more favorably to Brown’s that any back ever to play the game.  He retired following the 1998 season averaging 1,500 yards per year and at the pinnacle of his profession.  He was only 1,457 yards short of the NFL’s all-time career rushing mark.

Happy 47th birthday to one of the best there ever was.