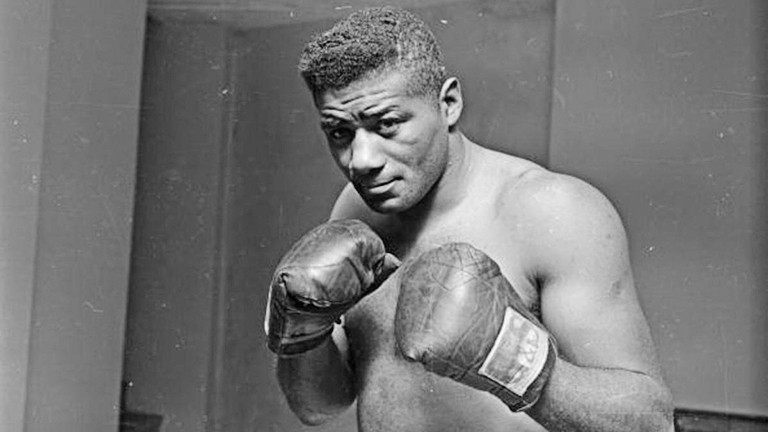 Floyd Patterson became, at 21, the youngest man to win the world heavyweight boxing title.  He went on to become the first heavyweight ever to regain it.

Born in a cabin in Waco, North Carolina on January 4, 1935, he one was one of eleven children.  The family moved to the Bedford-Stuyvesant section of Brooklyn where Patterson found trouble.   Unable to read or write at age 11, his mother had him committed to Wiltwyck School, a reform facility in upstate New York, where he took up boxing.  He returned at 14 and trained in Manhattan under the legendary Cus D’Amato, winning the 1951 New York Golden Gloves middleweight title followed by the gold medal in the 1952 Olympics in that same weight class at the age of 17.  He was 40-4 as an amateur, with 37 KO’s and had his first pro fight on September 12, 1952 when he knocked out Eddie Godbold in the 4th round.  He went on to win 30 of his next 31 bouts and moved up the ranks as well as weight classes.  When Rocky Marciano retired as World Heavyweight Champion in April of 1956, Patterson was ranked as the top light heavyweight contender and the IBC named him one of six fighters invited to compete in an elimination tournament for the vacated crown.  In November of that year, he faced former Light Heavyweight Champion Archie Moore for the World Heavyweight Championship.  He knocked Moore out in five rounds to become the youngest World Heavyweight Champion in history and first Olympic gold medalist to win the heavyweight title.  Patterson was 21 years, 10 months old at the time.

The young champion successfully defended his title four times before facing Sweden’s Ingemar Johansson in three successive fights.  The first came in June of 1959 when the Swede knocked the champion down seven times before the referees stopped the fight in the third round.  Patterson reclaimed the title one year later by knocking Johansson out cold in the fifth round to become the first heavyweight to reclaim the belt.  The two fought for a third time in March of 1961 and Patterson retained his title by knockout in the 6th round.  He beat Tom McNeely in his next match before facing Sonny Liston, who came in as the top rated challenger with a record of 33-1.  The bout took place at Comiskey Park in Chicago in September of 1962 “The Bear” knocked Patterson out in the first round with the third-fastest knockout in boxing history The two squared off in a rematch 10 months later with exactly the same result.  Liston went on to fight Cassius Clay for the first time in 1964 while Patterson remained a contender but never regained the heavyweight title.

“The Gentleman of Boxing” went on the fight 21 more times after the second Liston fight, including a win over George Chuvalo in what Ring Magazine voted “Fight of the Year” in 1965.  He twice faced Muhammad Ali and lost both, including the final fight of Patterson’s career in September of 1972 in New York’s Madison Square Garden.  He finished his career with a record of 55-8-1 and 40 KOs and was inducted into the International Boxing Hall of Fame in 1991.

Although Mike Tyson later became the youngest boxer to win a world heavyweight title, his win over Trevor Berbick in 1986 was not undisputed, as Patterson’s was.  Both Patterson and Tyson were trained by Cus D’Amato.

On this date in 1958, Floyd Patterson defeated Roy Harris in 12 rounds at Wrigley Field in Los Angeles to retain the heavyweight belt.

“They said I was the fighter who got knocked down the most, but I also got up the most.”– Floyd Patterson