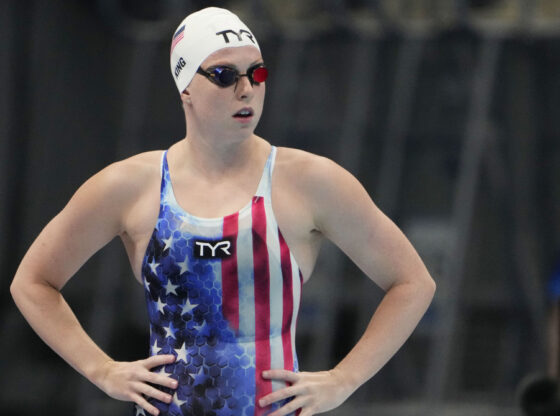 Lilly King is queen of the breaststroke.

A senior at Indiana University, King is the current world record holder in the 50m and 100m breaststroke.  She is an 11-time international gold medalist in distances from 50m to 200m.  The ultra-competitive King achieved her greatness success on swimming’s biggest stage – at the 2016 Summer Olympics.  In the Rio Games, Lilly captured gold in the 100m breast while setting a new Olympic record.  She also claimed gold in the 4x100m medley relay.

A breaststroke specialist from Evansville, Indiana, Lilly King is a four-time Big Ten Female Athlete of the Year.  This weekend, she will attempt to defend her titles in the 100y and 200y events [international events are meters, high school and college meets are yards] at the NCAA championships.  King is the only woman in league history to be named Big Ten Swimmer of the Year in each of her four college seasons.  This weekend, the bubbly IU senior is seeking her eighth individual NCAA title by sweeping both breaststroke events for the fourth straight year.  The 16-time Big Ten champion is on the cusp of garnering four more All-American honors – giving King 16 for her career.

“Every time her back is against the wall, the more you corner her, the better Lilly King is.”  Indiana coach Ray Looze.

Born February 10, 1997, in Evansville, King comes from a sporting family.  Her father Mark ran track and cross-country at Indiana State and mother, Ginny, swam for Eastern Kentucky and Illinois State.  King started swimming at seven.  An active child, it was the only thing that could calm her down.  She attended Reitz High School, where the Panthers practiced at Lloyd Pool.  An old, dim, drab facility that serves as the only training water for six Evansville high schools, Lloyd Pool was overcrowded.  Often, King was forced to go around [and over] slower swimmers.

Evansville sits between folds of the Ohio River, hence its’ nickname — the Pocket City.  Home of hall of famers Bob Griese, Don Mattingly and Mike Blake, it is an unlikely place to produce an Olympic champion.  King is no golden child from a powerhouse swim club.  When not swimming for Reitz, she trained with the Newburgh Sea Creatures club team and often worked out on her own.

Displaying an unrelenting work ethic and a passion to be the best, King burst onto the scene as an IU freshman.  Swimming 14,000 yards per day, four days a week, she often trains with the Hoosier men.  “I’m learning that you can dial up the pressure on her a bit,” said IU swim coach Ray Looze.

The hyper-focused King hates to lose, stepping up her game in the biggest moments.  She stunned the world at her first NCAA appearance, becoming the first woman to swim sub-57 seconds in the 100y breaststroke.  Having already broken NCAA, American and U.S. Open records with 57.15 in the prelims, King went even faster in the final to take the title in 56.85.  In the 200, she set records flying as well.  King shattered the 200y breast record by half a second and beat her IU teammate by almost three seconds in the final to claim gold.

A live wire, Lilly King has no filter and makes no apologies.  An international clean-sport hero, King was outspoken at the 2016 Olympics.  In a sport that leans toward blandness, King became a pot-stirring smack talker in Rio.  Upset that Russian rival Yulia Efimova was allowed to compete despite two failed tests for PEDs, King didn’t believe someone with doping allegations should be allowed to compete in the Olympics.

“You’re shaking your finger ‘No. 1’ and you’ve been caught for drug cheating?…I’m not a fan.” — Lilly King

In what felt more like the lead-up to a boxing match than a swimming meet, King and Efimova engaged in a back-and-forth finger-waving duel during the preliminary heats of the 100m.  After Efimova took first in her prelim, the Russian held up her finger to say she’s number one.  Watching on TV in the ready room, King, who was awaiting her own heat, was caught on camera wagging her finger at Efimova.  After winning her trial, the American once again wagged her finger.  Her Mutombo Moment went viral.

King beat Efimova in the final to win gold.  In a press conference afterward – while sitting next to Efimova – said, “It was so incredible, winning a gold medal and knowing I did it clean.”

Arriving out of nowhere, King’s life has been a whirlwind since returning from Rio.  In April 2017, she and fellow Hoosier Olympic swimmer Cody Miller served as Grand Marshalls at IU’s Little 500 bike race.  Three months later, King captured four gold medals in the Long Course World Championships in Budapest while lowering the world record in the 100m breast.  She drove the pace car at the 2018 IndyCar Grand Prix at the fabled Indianapolis Motor Speedway.

Lilly King is currently spearheading an effort to build a new state-of-the-art aquatics center in Evansville.  A physical education major, she will graduate IU this May, then set her sights on the 2020 Olympics in Tokyo.

The 2019 NCAA Women’s Swimming and Diving Championships get underway today at the Lee and John Jamail Swimming Center at the University of Texas-Austin.  Lilly King will attempt to capture her fourth straight NCAA title in both the 100 and 200-yard breaststroke events.