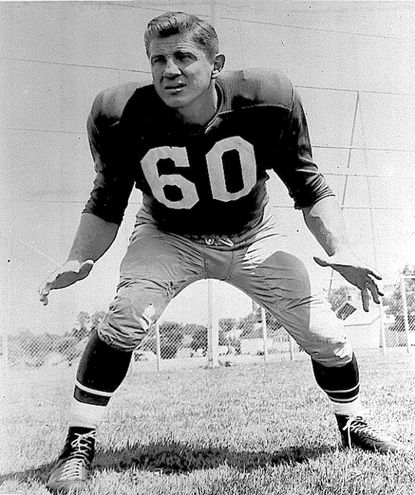 Once upon a time, football players never left the field.  They played on both sides of the ball – offense and defense – and even stayed on for punts and kicks [before they were called “special teams”].  Beginning in the 1950s, coaches began employing the “two platoon” system, rotating units of offensive and defensive players depending on which team had the ball.  The two platoon system quickly gained favor, as it allowed players to specialize.  It also allowed them to catch their breath on the sidelines during the course of the game.  By 1960, center-linebacker Chuck Bednarik was pro football’s last two-way player.

As an offensive lineman, Bednarik – who was named center on the all-time NFL team in 1969 — was a rugged, durable, bulldozing blocker.

As a linebacker, he was a bone-jarring tackler.

Possessing an unflinching work ethic, Bednarik was the embodiment of toughness.  Forged in Pennsylvania’s steel belt, the last of the true full-timers clocked in a full hour on the football field.  Perhaps only Chicago’s Dick Butkus rivals Bednarik as the archetype of the fabric of his region.  Blue collar to the core, the fiercely-competitive Slovakian-American refused to come off the field.

In 14 NFL seasons, Bednarik never earned more than $ 27,000 a year.  He supplemented his income in the off-season selling concrete for the Warner Company, earning him the nickname Concrete Charlie.  The 6’3”, 233-pound Bednarik had great instincts.  He played with reckless abandon – dishing out more than he took – and had an imposing mean streak.

One of the most devastating tacklers in the history of football, Concrete Charlie symbolized Philadelphia’s toughness – and delivered a hit that still stands the test of time.

Late in the 1960 season, the Eagles battled the rival New York Giants for first place in the NFL’s Eastern Division.  With the Eagles leading 17-10 in fourth quarter, Frank Gifford of the Giants caught a pass over the middle and attempted to get to the sidelines.  He never made it, as Bednarik leveled the Giants’ star halfback with a devastating blow – later dubbed “The Hit.”  Gifford’s head whiplashed against the frozen Yankee Stadium turf, knocking him out cold.

He suffered a concussion and did not play again until 1962.

The Eagles won the game and the Eastern Division, leading to a showdown with the Green Bay Packers at Philadelphia’s Franklin Field for the 1960 NFL title.  Playing in the same stadium where he had starred at Penn, the 35-year-old Bednarik made more history.  With the Eagles leading 17-13 late in the game, Bart Starr moved the Packers down the field.  The ball was on the Eagles 22 when Starr threw a swing pass to fullback Jim Taylor, who was heading to the end zone.

After playing 58 ½ minutes and leaving the icy field only for his team’s kickoffs, Bednarik – who was the oldest player on the field — still had enough left to get to Taylor.

“He got through a couple of defenders,” Bednarik said, “but he had to go through me.

That wasn’t going to happen.”  Bednarik met Taylor at the nine-yard line, where, wrote Bill Lyons in the Philadelphia Inquirer, he “wrestled him to the cold, hard ground like a rodeo cowboy bulldogs a steer and then sat on the squirming, seething Taylor until the clock blinked down to all zeros.”  With the NFL title secure, Bednarik told Taylor, “You can get up now, Jim.  The game’s over.”

It would be the last NFL championship for the Eagles for 58 years, and was the only playoff game Packers coach Vince Lombardi ever lost.

Born and raised in Pennsylvania’s Lehigh Valley, Bednarik played his entire career in Philadelphia, both college and pro.  He personified the blue-collar work ethic of the area, missing only three games in 14 years, and none in his last five seasons.  The Sixty-Minute Man played in 169 NFL games and was named First-team All-Pro ten times.  He retired in 1962.  Five years later, he was inducted into the Pro Football Hall of Fame in his first year of eligibility.  A member of the 1950s All-Decade Team, Bednarik was named to the Eagles Hall of Fame in 1987, the same year he had his number 60 retired.

Charles Phillip Bednarik was born May 1, 1925, to parents who had emigrated five years earlier from eastern Slovakia.

They settled in Bethlehem, Pennsylvania, and worked for Bethlehem Steel.  Bednarik helped Liberty High School to an undefeated 1942 season as a junior, then joined the Army Air Corps following graduation.  He flew 30 missions over Europe during World War II, serving as a waist gunner in 1944 and 1945.  “How we survived I don’t know,” Bednarik later said.  “From then on, great things happened for me.”

He enrolled at Penn in 1945 intending to become a coach and teacher.  A four-year football letterman, Bednarik was named All-American in 1947 and 1948.  As a senior, he became the first offensive lineman to win the Maxwell Award as college football’s most outstanding player and finished third to Doak Walker for the 1948 Heisman Trophy.  At the time, it was the highest finish for an interior lineman in the award’s history.

The Eagles made Bednarik the first pick of the 1949 NFL Draft.

A talented catcher, he turned down an offer from the Philadelphia A’s to join the Eagles the year after they won their first NFL title.  As a rookie, Bednarik helped Philly repeat as world champions.  A perennial all-pro, Bednarik made the team as a center in his first two seasons in the league and was named to the squad as a linebacker from 1951 to 1956.  In 1954, Concrete Charlie was voted the most outstanding player in the Pro Bowl.

Chuck Bednarik was Eagles royalty. The toughest player in franchise history remained in the Lehigh Valley his entire life.  An outspoken, sometimes bitter critic of modern NFL players for playing on only one side of the ball, Bednarik called them “pussyfoots.”

Mr. Bednarik suffered from Alzheimer’s disease and dementia related to football late in his life, and died March 21, 2015, in the Lehigh Valley.  He was 89.

Bednarik was inducted into the College Football Hall of Fame in 1969.  Since 1995, the Chuck Bednarik Award is presented annually to college football’s best defensive player.