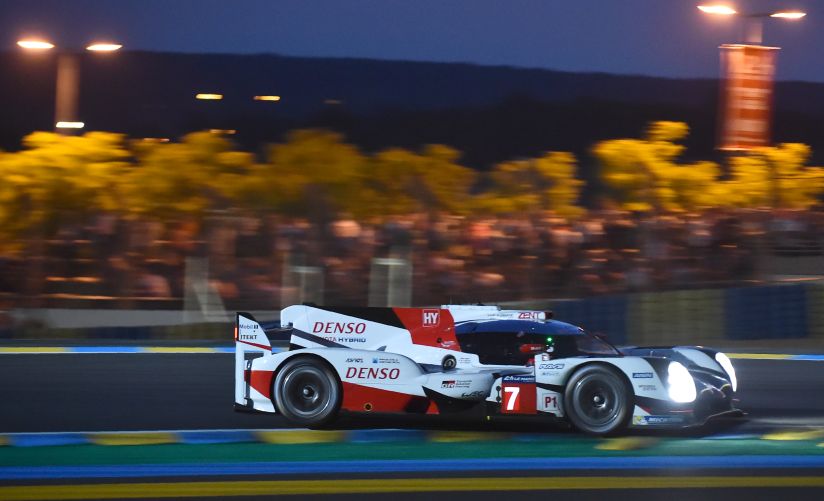 The 24 Hours of Le Mans is the world’s oldest sports car endurance race.

Held annually since 1923 near the town of Le Mans, France, the race is called the “Grand Prix of Endurance and Efficiency,” as teams must balance speed with the car’s ability to endure 24 hours of continual racing without sustaining mechanical damage.  With the Monaco Grand Prix and Indianapolis 500, the 24 Hours of Le Mans comprises the Triple Crown of Motorsport — the three most prestigious races in the world.  First run in May 1923, Le Mans takes place over two days in June.  The event has been canceled ten times since its inception: a labor strike during the Great Depression wiped out the 1936 race and World War II caused cancellation of the race between 1940 and 1948.  This year’s race, held June 17-18 and won by Porsche for a record 19th time, marked the 85th running of the classic.  Run on the Circuit de la Sarthe, an 8.5-mile loop that has claimed the lives of 15 drivers, Le Mans has birthed other 24-hour events like Daytona, Nurburgring and Bathurst.  The competition includes 60 cars.  For over six decades, teams were comprised of two alternating drivers.  In the late 1980s, the rules were changed to mandate three drivers per car.

Le Mans is considered the granddaddy of all tough road racing courses and the 1967 event is the most exciting in the race’s storied history.  It is also the most important.  Held June 10 and 11, it was the 35th edition..

Carroll Shelby was named Sports Illustrated’s “Driver of the Year” in 1956 and 1957.  After winning the 24 Hours of Le Mans in 1959, he retired from driving and formed the Shelby-American, Inc. racing team.  Shelby entered three cars in the 1967 Le Mans race, each built on a Ford GT 40 chassis with a Ford 7.0 liter V8 engine [one of eight Fords in the race].  He hired Dan Gurney and A.J. Foyt to drive one of them.

The son of a Harvard Business School graduate who went on to sing in the New York Metropolitan Opera, Gurney was the first of three drivers [later joined by Mario Andretti and Juan Pablo Montoya] to have won races on the Sports Car, Formula One, NASCAR and IndyCar circuits.  A top-ranked F1 and Sports Car driver, 1967 was Gurney’s tenth start at Le Mans, considered the most grueling event in motorsports.  Shelby chose A. J. Foyt as his other driver.  Fresh off his third victory at Indy less than two weeks earlier, Foyt had been tapped to drive for Shelby-American in 1966 but delayed his debut by a year after suffering severe burns in a racing accident in Milwaukee.  A Le Mans rookie, the brash Texan angered French racing fans when he called the tricky, tree-lined Circuit de la Sarthe course, “Nothin’ but a little old country road.”

Critics predicted Foyt and Gurney – normally heated rivals – would break their car in an effort to show each other up.  The European press claimed the duo as American lead foots incapable of conquering Le Mans.  The Ferraris and other Ford GT40 teams were favored over the Foyt/Gurney squad, an advantage further compounded when the American duo only logged 15 minutes of track time to test their car in the days before the race.

After qualifying ninth, Gurney started the race and finished the opening lap in third place.  After the first hour he was up to second behind Australian Peter Hawkins’ Ford.  Shortly after handing over to Foyt at the first fuel stop, the Texan took the lead, running fast but not hard.  “The car had a higher top speed than the Ferrari so that even in the draft we could pull away from them a little bit,” recalled Gurney.  “We could probably gain 50 feet in the draft and were running about 212-213 [mph] down the Mulsanne straight.  It was pretty good for a race pace in those days.”  The Americans had a five-lap cushion at the midway point after the second and third-place teams dropped out with mechanical issues.  At around 4 am, Mario Andretti led a three-car crash of Ford car teams.  In the middle of Sunday morning, Foyt’s roof began to come apart and had to be fixed with duct tape, yet the Americans held on, winning by three laps over Mike Parks and Ludovico Scarfiotti driving a Ferrari P4.

Gurney and Foyt completed 388 laps, covering a record 3,249 miles at an average speed of 135.48 mph.  It was the fastest 24-hour race in history and still the fourth-fastest Le Mans on record.  The unexpected 1967 victory is the only time in history the legendary 24-hour classic was won by an American team with American drivers driving an American car.  It was the second and last time that Gurney and Foyt shared a car.  Sixteen cars finished the race, with Shelby-American GT40s finishing first and fourth.  Six Fords did not complete the event.

When Dan Gurney was handed the traditional magnum of champagne on the victory stand following the race, he saw Ford CEO, Henry Ford II, Shelby, friends, family and several journalists who had predicted disaster for he and Foyt.  Gurney shook the bottle and sprayed everyone in sight, establishing a tradition re-enacted throughout the sports world every year.  “We were up on the podium and they handed us a magnum of champagne,” explained Gurney.  “The photographers down below us were looking expectantly and I thought, ‘How can they take part in this as well?’  I used the champagne like a fire hose to spray the photographers.”  The bottle was used as a lamp by Life magazine photographer Flip Schulke for many years but now resides with the 86-year-old Gurney at his home in California.

One week after Le Mans, Gurney took an historic victory over Jackie Stewart in the 1967 Belgian Grand Prix in a car of his own design.  The remarkable Le Mans/F1 double will unlikely ever be repeated.  Foyt won Le Mans in his first and only attempt.  The legendary Texan went on to win a record fourth Indianapolis 500 ten years later and is the only driver in history to win at Indy, the 24 Hours of Daytona, the Daytona 500, and the 24 Hours of Le Mans.  Mr. Gurney and Mr. Foyt are both members of the International Motorsports Hall of Fame.